Google Maps: York ME Found; Google gets Letter from Congresswoman 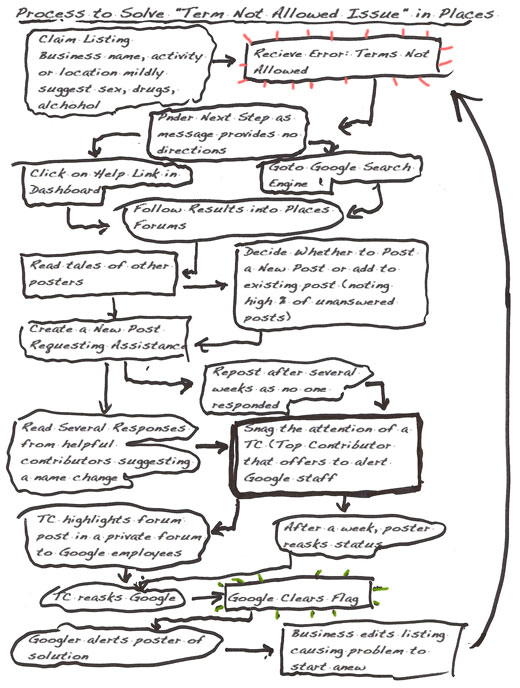 The good news is that York Me, having been lost repeatedly, has once again been found.

But the story of York is really the story of Maps and Places and it is in many ways bigger than the loss of a single geographic entity. Google has insinuated Maps and Places very deeply into our lives. People and business depend on both products day in and day out to get their jobs done and their sales made. Google Maps and Places are no longer just services but have become critical utilities.

People expect utilities to work and when they don’t, folks expect that they will be repaired in a timely, seamless way.

With York, the process of repair was anything but seamless and the residents decided to involve their local Congresswoman, Chellie Pingree on their behalf. Shortly before the problem was solved, she shot off a letter to Larry Page looking for a solution that got the attention of the local news.

The issue isn’t just that York was lost (although that is a growing social and business problem). Nor even that it was lost again. As Top Contributor EHG (who did a great job on the problem) points out, the real failure is not in the data error per se or even in the repeated loss of the data but in a business process that takes repeated and oft times futile interactions to get a serious problem fixed. This is not the only problem that is handled this way as virtually every issue with Maps and Places, and there are many, have had these process issues since day one. I went so far as to flow chart the process of how a typical problem is solved in Maps and it ain’t pretty!

The question though I have is at what cost to Google?

As Google Places has moved to a dominant position in our lives and a dominant position in the industry, it no longer is flying under the radar. Google Places has about  3 million claimed business listings in the US alone. That means that 20% of all businesses are directly interacting with the product and can see not just the benefits but the costs of doing business with Google.

Problems that crop up no longer stay buried in the forums but are getting carried forward by these business folks to the politicians, large regional, national and international news papers. When you lose a town or misplace a highway it is no longer just an angry customer but a reporter or an ambitious politician that is taking up the cause. When you do it repeatedly and leave the questions unanswered Google runs the risk of ever increasing scrutiny and loss of public confidence. Each and every one of these failures ends up tarnishing a great brand just  a touch more until…

Let me have one of the affected business owners in York say it as he is just coming to the realization that has been so evident to us in the marketing business for the past 3 or 4 years:

As an early adopter of Google search, as an enthusiastic user/promoter of Gmail, as a lover of Picasa, as a blogger…etc. our disappointment with Google is devastating.

Don’t get me wrong. We are thrilled that this issue seems to be resolved. Thanks again to the Google person who finally solved this.

But when a company that you have endorsed, promoted to friends and family, used with enthusiasm a zillion times, becomes so clumsy that it won’t respond to it’s customers over a period of months, the sense of betrayal is very real.

Every company and every country has it’s early surge of growth and customer focus. Then at some point, it loses its grip and becomes so large and bureaucratic that it becomes ineffective.

I truly hope that this event is an anomaly. I love most of what Google has done. I want to be that enthusiastic booster again. How could that happen?

Google could begin by responding directly via phone call or email to customers with legitimate concerns. Otherwise we are left with the impression that we are just pawns in a huge corporate mosh pit.

A simple human outreach would have solved this problem and saved  the world of search thousands of hours of wasted time. Most of all, it would have restored Googles reputation of “doing no evil” as well as being the nimble organization it started out being.

Perhaps some top executives could actually read some of the “reported problems” and set goals for resolution for their engineers. Don”t tell me it isn’t practical. I used to be corporate dude in a major company. All it takes is the right attitude at the top.

Google’s corporate goal is to achieve lower operational costs through automation of their customer service and to do so while creating an ever stronger brand. They have attempted to do so in Maps and Places and have failed. It is possible to do. A company like Amazon demonstrates that with superlative on line products and impeccable processes it can be done.

The solution for Google? The answer is easy and one that Google has articulated to me right along. Fix the products and fix the processes to report problems… make them easier to use (without dumbing them down) and create processes that can solve 99.9% of the problems in an automated way. Why it has taken so long is anyone’s guess. But, and this is a big but, until it does happen Google needs staffing and people to deal with the issues.

Local is widely perceived as the next critical piece for the growth of the internet. When it comes to income opportunities it may even be more important than social. As the local internet gets even more entwined in our lives, Google risks more than a few angry business people with their products, processes and customer service. Google, in failing on these fronts in Maps and Places, is putting the reputation AND success of the whole company on the line.

EHG’s comments are spot on. They might be able to fix these issues via algo, but to date the answer has been a resounding NO.

I think that Congress person needs to distribute that complaint to others in Congress. They should bear down on Google.

Here is a simple answer.

2. Have these humans/ with engineers communicate to those that have made the complaints.

Glory be. That would make Google like any other business.

Until they do that, they seem to occupy a rarified air, in which they can get away with this outrageous behavior of ignoring one and all.

The big issue is that their monopolistic control of the search market exaserbates the issue. Here is a blatent case where the Google monoply can have disasterous impact on others.

Who annointed Google as God???

Great Post as always, I’m passing it around to fellow SMBs.

Here’s a humorous take on the question “who anointed google god?”

Not sure if you have seen my article Places Purgatory that details the many levels of salvation but you might find it of interest.

Great post and I totally agree! Not to self promote, but I recently wrote about this on the SEOmoz blog here. The more attention given to this topic at the government and corporate levels, hopefully the more quickly Google will realize how important this area really is.

I’m glad to see that I’m not the only one frustrated by the impenetrable Google. Two weeks ago I checked in on my Places page (that I’ve had for a couple years, back when it was Local Business) to see that my account was suspended for violating quality guidelines. No specific guidelines, mind you, just “it was something on this list here.” So I made the changes that I thought I needed to, put it through for review, and yesterday – denied. Still violating quality guidelines.

The worst part is that the email ended with “Cheers, the Google Team.” Cheers? Really? That’s like when I used to write parking tickets and I put a happy face next to my badge number…

@Dave
I would suggest that you hire someone that has a lot of experience to look at the listing.

Ha! I had to send this to a few clients to help them realize that we are not alone.

What a total mess Google has made of this service. Especially since last October when they started mixing Places with Organic I get nothing but confused emails and calls all day from clients: why does the Places listing show up sometimes but not always? where did the 7 pack go? why is my Tempe listing showing up for a phoenix search?

Safety in numbers is comforting but Places is really becoming quite the time suck.

Mike – it’s probably going to come to that, I have no doubt. But, we’ll see. It’s one of those things, it’s not a giant priority right this second because I’m crushingly busy. If I get rejected again, time to hire it out and move on. (see? I’m learning to hire out the stuff I’m bad at. Small Biz 101!)