The plot thickens in regard to the missing TripAdvisor reviews. TNooz.com, reports that:

Google is no longer able to stream in reviews from TripAdvisor to Places pages after the user review giant blocked it.

TripAdvisor confirmed the move today in an email, stating that while it continues to evaluate recent changes to Google Places it believes the user does not benefit with the “experience of selecting the right hotel”.

“As a result, we have currently limited TripAdvisor content available on those pages,” an official says.

As an official states today, TripAdvisor has decided to restrict its reviews from appearing in Google Places (the company also confirmed the earlier technical problem running, purely coincidentally, as the same time as its limitation exercise).

I do not have confirmation of the TripAdvisor comments (I have a call into them) and they stand in stark contrast to a comment that a Google spokesperson made yesterday about the missing reviews that “We’re aware of a technical issue in which TripAdvisor reviews are sometimes not appearing in results for Google Places, and our team is working to resolve the matter.”

This while searches today are in fact showing TripAdvisor reviews in Places Search results: 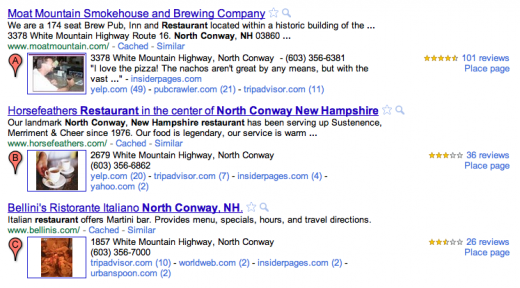 During an ILM session this morning, Carter Maslan stated that it was a parsing bug preventing the reviews from showing.

@Adam
That is what Google pr said as well… I am curious though about the comments on TNooz.com….. they tell a different story. Which is in fact the truth? One, the other? Both?

As I pointed out here:

Given that TA and Google can’t agree what the reason is, it’s hard to believe anything respective spokespeople say – I’m just going to just wait and see what happens.

I will continue to attempt to get clarification.

What is The Real Reason that TripAdvisor Is Limiting Review Content To Places? | Understanding Google Maps & Local Search
December 9, 2010 at 5:18 pm

[…] to the forums. For those of you that missed the Google TripAdvisor Kerfuffle in December see this article. Share and […]