Google appears to be actively removing some reviews from Places listings.

Some of the recent problems of reviews being lost are clearly algo based and reports of lost reviews continue to pile up in the forums. But my poking around in Places indicates that there is more intentionality than bug in the behavior (although never underestimate the bugs in Places :)).

Yesterday I noted that Google is favoring reviews that were written by reviewers that have a public presence. Clearly, they are now not displaying the names of “private” reviewers. Have the changes gone deeper than that?

I  wanted to go back and see if any suspicious reviews had been removed. This is harder than it seems as very few people keep track of individual bogus reviews… where and when they saw them, who posted them… those details are usually lost.

However, I did remember that both Miriam Ellis and I had done articles about reviews that seemed suspect; me in Do Positive Only Review Services have a place? and Miriam in her great piece Are These Reviews Authentic? You Be The Judge. Serendipitously both pieces had identifiable screen shots of obviously questionable reviews as a basis for a limited test.

Surprise! (or maybe not) In both cases, all of the questionable reviews in the screen shots are no longer showing in Google Places.

While Goodson still shows 32 third party reviews and 20 reviews from Google, there is not one review from the timeframe from July 23 to August 2  still visible on the Places Reviews by Google User page.

The screen shot from my article showed reviews for a Cahuenga Pet Hospital from March 16th through March 24th: 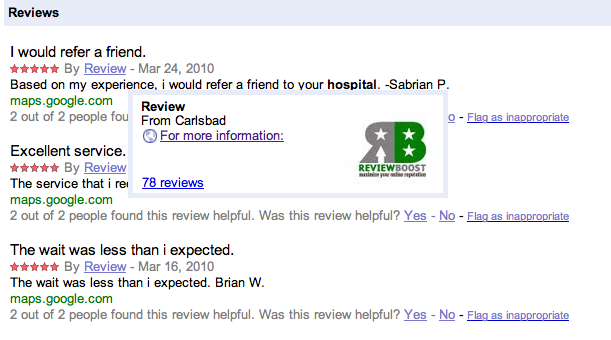 Like in Miriam’s case, those reviews have been excised from a Places page that still includes 14 additional reviews.

Clearly, the disruptions that we are seeing in the Google Places Review environment are more than bugs, quirks and algo twitches. While two Places accounts are not a significant sample and may not totally reflect the new reality, these two cases are not accidents.

It appears nearly certain that Google is starting to clamp down on the fire hose of review spam.

Putting on my cynical hat for a minute, though, I fear they might end up whitewashing some legitimate negative reviews as well. If Tags end up being the money maker they’re banking on, there certainly would be some financial incentive for them to do so. NB – I have no evidence they have been or will do this – just a concern given that they’re removing some reviews.

While there are many things wrong with the way Google is handling this, I don’t think (no offense) that your worries are a cause for concern. They have every reason to attempt to retain good content and excise bad content… intentionally getting rid of real negative reviews is not in their DNA.

I would echo Mike’s concern about Google inadvertently removing legitimate negative reviews (and positive?). Seems it would be better to risk some potentially fabricated reviews.

@Mike – you’re probably right. I agree it goes against their mantra and would put my money down that it won’t happen. But…I think we’ve all seen exceptions made / rules bent / etc. for large advertisers on the AdWords side. As they move into monetizing local more – something they didn’t do before, so the incentive wasn’t there – it creates a conflict of interest. That’s not to say they will do it, but that conflict wasn’t there previously. There also isn’t the same firewall between paid and organic that there used to be, at least when it comes to local.

I have two questions/comments

#1 Someone (all of us?) probably owes Yelp an apology for their Review Filter. If someone as big as G is starting to see the need, that could be a real competitive advantage for Yelp.

#2 Has the Places team read all of the nasty blog posts and media stories in the last two years by irate business owners and customers about their Yelp reviews getting thrown out with the bathwater? I will be interested to see how they deal with this from a PR, let alone customer service, perspective?

I’ve done a little research and have to agree with Mike and Miriam. Well done.

@Justin
You make some great points about the conflict of interest and the lack of firewalls in Local…. Places, Tags and Boost all seem to inextricably linked. I had not thought about in quite that way but you are absolutely right… On the plus side it makes it hard for them to weasel out of support now. 🙂

@Mike – +1 on the support comment. I don’t really expect them to do anything untowards, but money makes people make interesting decisions. Either way, they’ll really be hurt by their lack of transparency, even though I understand why they need it to counter spam at least to some extent.

2 thoughts: (1) its a great first step and (2) its much harder to tell what is fake or not with the reviewer ID gone.

I have trouble reconciling the idea of trust with not showing the name… is that what Google intends? Will consumers learn that? Will the algo somehow minimize those?

Well what I have seen is those that don’t have physical address and were spoofing. Mobile and Local are about to see change like never before. Their top dog of search is now in charge… with caffiene and the merger of social and Web graph identifying a sock puppet from a real person is going to be childs play.

Wow – amazing! I’ve been looking at the car dealership reviews you’ve cited from my earlier post, Mike, and the difference is palpable. Though I am still seeing some reviews from Sept-Oct that LOOK to me like those fake reviews because they have some of the earmarks of mentioning the employees names in them, it’s now impossible to tell because the screennames are gone.

But the main thing is, this company likely engaged in this purchase of bogus reviews because they have 8 extremely negative 1 star reviews. Now they are down to a 12 positive/8 negative ratio which is likely more accurate, and makes their whole profile more trustworthy at a glance. I imagine the owners are furious if they’ve noticed this, and would have a hard time seeing that this wipeout of their suspect reviews actually makes their business look more trustworthy rather than less, but that’s how I see it.

It’s really amazing to see Google’s official announcement about this (in your most recent post) and we’re in for some ride with this change.

Yes the “feedback” has already started in the forums:

We lost ALL (60) Google reviews, all were 5 out of 5 stars really setting us apart. It took a long time to get all those and they’re all legit. We have identified nearly every review for which customer it was and have an invoice, email, phone number, address to prove it. Other than asking for a review and explaining how to do it, there has never been involvement by anyone other than the customer in putting those review up in their own words, on their own time, their own computers, without ANY incentives.

It’s sickening to lose all that hard work and to top it off, our competitors who didn’t lose their reviews think all ours were fake now. How do we know? Because they’re telling potential customers this!

What I would prefer to see if a greyed out review of potentially questionable reviews(Unverified) and not count them in the numbers, much like google does with the serps. Removing reviews only causes more issues, see Yelp.

[…] Google, Yelp and Tripadvisor have implemented some measures to limit fake reviews, the efforts have only been partially successful. Given the increasing media coverage […]

As with the case Mike B. quoted above, we had 32 totally legit reviews for our dealership. Yes we showed customers where to post their reviews, but we did not incentivize for positive reviews at all. First sign of trouble was when Google suddenly double-posted the 10 reviews that were posted directly on GP so it then showed 42. I notified them of their error (probably my biggest mistake). Within a week or so, they dropped our review count to 28 (below the legit 32), and since then they’ve been dropping more steadily until now they only give us a 6 review count. So much for Google Places. Yelp, Yahoo, Bing…here we come. I also do work for other companies too, and from now on, no more pointing the mobile sites to G Maps.

Many of our customers name the salesperson they dealt with and gave them high marks. So that is not the earmark of a fake review. The customer just happened to think the salesman was good to them and wanted to put that on record. Nothing wrong with that at all.

I’m hoping that Yelp and others don’t go overboard like Google (yes I know of Yelp’s history, but hopefully they have learned some moderation in the process). It really bites to have the best customer service policy in the county – bar none (we know it and our customers know it) – and be penalized because we got so many glowing (but very legit) reviews.

@Steve
My suggestion was and is: use as many review sites as makes sense for you AND your customers. Choice for the customer is critical, broad foot print is critical for you and it is an important defensive measure to have a good blend of 3rd party AND Google reviews so if they misplace one or the other you always have something to show for it.

Despite changes in the review landscape, for many types of businesses I still recommend these four review sites: Google, Citysearch (for its Facebook login), Yelp and although of declining import, Yahoo. Diversity, respect for customer choice, broad footprint are still the order of the day.

Yes Mike I show our customers CitySearch, Insiderpages, DealerRater, Yelp, and Superpages. I stopped sending them directly to Google months ago after learning that the 3rd party site reviews were more likely to help GP rankings.

Agree Yahoo is diminishing rapidly but I will try to start utilizing them more, just like I am trying to shop more at Kmart. I like competition and would hate it if the world ended up being made of nothing but Google and Walmart. 🙂

“Punishing” Google really ends up punishing you and the client that wants to use them. You by not having prominent footprint there. What if they change their algo? and I don’t agree that 3rd party is worth more than Google.

As to the client what if it is there favorite site?

I wouldn’t consider spreading love to the competition as punishing Google. I just don’t want to perpetuate the “Google is God” myth, lol. As to doing Places optimization work, I may still offer it, but I’m certainly going to be removing any implication of performance guarantee with all the see-sawing G is doing.