I read the other day in I, Cringely’s Blog that Google had a booth last month at the Online Lenders Association convention in Chicago, a group mostly composed of Payday lenders… you know the ones… they charge ~400% to help poor folks get from one pay check to a smaller one. What Google was doing at their convention I have no idea. This is legal part of American society for which I have little sympathy and less respect.

The article, however, about Google’s involvment reminded me that I had written extensively about spamming techniques in the Payday Loan industry as far back as as 2007. I did a quick search on Google for Cash Advance NY NY and the first result struck a bell for me and seemed oddly familiar. I did similar searches in Buffalo and a few other cities and saw much the same… 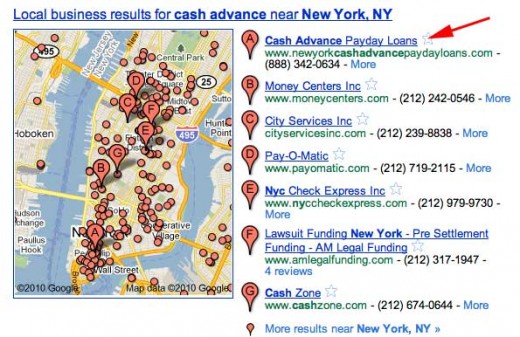 While Google’s effort at fighting spam might be criticized, their ability to search and sort my back library is near faultless. It turns out that I had written about this very company in a December, 2007 Searchengineland article titled: MapSpammers Getting More Sophisticated. In the article I detailed their techniques having used the exact same search & company as the example spam. At the time I included a screen shot of the Local results showing their #1 standing.  I noted:

The basics of the plan are simple (as originally described at oooff.com):

The folks at Google have mentioned on several occasions that they frequently allow spam into the Maps index so that it can be used to train and inoculate the system against future spam as they use it to increase their understanding of it. That may be so but leaving this crap in the system to display so prominently actively puts Google in the middle of a vicious cycle of exploitation.

With babies these days, there is a great deal of research that indicates that allowing them to actively play in the dirt is good for them and inoculates their system against a host of potential ailments and creates a dynamic with the bacteria that leads to increased happiness. But at the end of the day, a good parent still brings them inside and washes them off.

Google should take the lesson to heart. In the three years since this exact problem was reported, their baby, the Maps index, has started to grow up and deserves a decent bath. 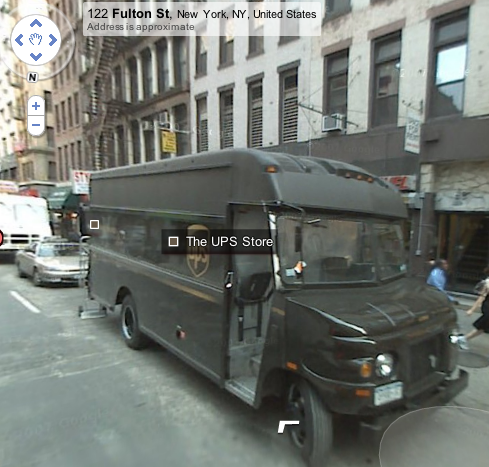 its times like this when I think I should go off and take a few hard shots of pure alcohol since it is so absurd…and its still early in the morning. Geez.

Thanks for the article. Very revealing.

Love the comparison. My listings are my “babies” and help me and my employees feed our human babies. Mapspam that was removed months ago is now back. So I guess those babies were only on “time out”? 🙂

The I, Cringely article was truly gripping, and the last thing I thought reading it was that Google’s response would be what it was. It does almost sound like they are considering getting into this business…I just wouldn’t know what to say to that! As for the baby, you don’t have to get into the tub with it to give it a bath.

The speculation on this is, as Dave says, fascinating. Great discussion, Mike.

nope….usually it’s a wonder Napa cab or an Aussie shiraz….sigh….

great piece Mike, thanks! as an aside, I know an SEO inhouse dept head at a MAJOR US payday loan/cheque cashing franchisor…and he’s often said that their monthly budget for this kind of SEO manipulation in his 9 person dept is 7 figures. that’s more than $12 million annually…I’ve no reason to doubt him either as that co does hundreds and hundreds of millions annually I hear….

sigh….really makes us teensy SEO types tho ‘cringe’ when asked by a Mom&Pop payday shop if we can help….

a “still” — really? well, good for you….the best I can do at my own office is that iconic photo of Marilyn Monroe standing over that subway grate, her skirt billowing around her hips….

but a still! man that’s an “office furniture” kinda thingy any man would love, eh!

@Mike: I agree on that wholeheartedly. When my son starts up when we eat out, I instantly take him outside so as not to suffer others. I remember those days of being single and hearing screaming babies.