Google Maps – Report A Problem Process “In the Weeds”

Last October, Google replaced TeleAtlas as their primary geo data provider with their own StreetView data. At the time, they also rolled out the “Report a Problem” link on Maps. The idea was/is that users could help Google keep all of this Map data up to date. Google’s goal at the time was to resolve each map edit within a month. From the LatLong Blog (bold mine):

So where do you fit into this? Well, we’ve found our users are also remarkable data sources themselves, so we’ve added a new tool to Google Maps that lets you communicate directly with Google about any updates that you think need to be made to our maps. You’ll find this “Report a Problem” link on the bottom right of Google Maps (you can also find it by right-clicking on the map). Has that new highway on-ramp finally opened up? Do we have an outdated name for your local school? … Tell us! Once we’ve received your edit or suggestion we’ll confirm it with other users, data sources, or imagery. We hope to resolve each edit within a month. If you submit your email address, we’ll even keep you posted on our progress.

Well I am here to inform you that, even for Google, the best laid plans of mice and men often go astray. Google is officially in the weeds on processing and absorbing end user corrections into the Maps geobase. Either that or their email system is broken.

I just received this email from Google on a change that I suggested to them on August 16 about a problem with Sunset Fl: 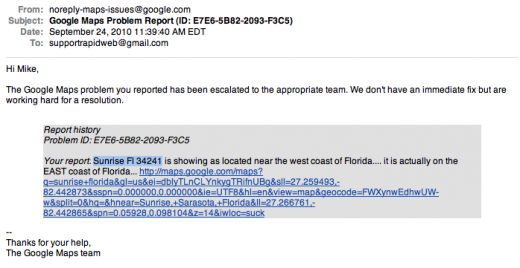 Admittedly, Google has fixed the Sunrise Fl problem. They certainly had enough feedback on the problem (CBS, NBC, AP, CNN, BBC, Time, the forums, the Mayor of Sunrise) but it doesn’t appear that my appeal through normal channels has been heard yet.

“Every hour, our users make over 10,000 corrections or additions to Google Maps, like updating the position of markers or correcting other small errors, and for the most part people are being really helpful to other users.”

Hmmm… no wonder they are just getting around to my request and that I stand in line behind the AP. Perhaps there are limits to the benefits of crowdsourcing.

“The Google Maps problem you reported has been escalated to the appropriate team. We don’t have an immediate fix, but are praying hard for a miracle.”

I have this image of the lone person sitting in the damp, corner basement office, poring over a 20 foot long printout, trying to decide which one they should do next… oh and they are taking orders via a pneumatic tube ala JC Penny in the 1950s.

As a white hat web visibility consultant, this is really a challenge. Every day we see listings in Google places, using ketywords instead of actually company names. If you report it nothing happens, and they stay on top of the listings.

We are staying the course of taking the high road. Seems like Google really could invest more resources into this. I doubt they can understand the impact all of this has on millions of small business owners and employees.

Maybe its time for them to go to a paid listing model. At least that is fair in the context that everyone plays by the same rules.

I was going to say that Google is probably receiving an ungodly amount of corrections. I would have almost assumed a month was too short right off the bat. At least they’re making the effort and like they said, users are a valuable source of information.

“oh and they are taking orders via a pneumatic tube ala JC Penny in the 1950s.”

Yep, I can picture that. I wonder that they don’t have some kind of tagging in place where ‘Sunrise’ would be flagged as resolved or something like that, so that everyone who reported it could receive a resolution email. No, maybe that would just end up making things more complicated.

Thanks for reporting on this, Mike.

I just noticed that a bunch of mapspam that had been removed, is back since this last update.

@Miriam
it appears that there are multiple channels for a repair/fix to take place. The “report a problem” avenue is obviously out of sync with other efforts. I am sure that once they get around to looking at the “report a problem” report they will let me know that it is fixed.

Hi there,
I’ve noticed a new problem with many businesses. Last week they were “owner verified” and now they can be edited freely. I can’t verify them with their old Google account – it just open the Dashboard like everything is fine. More Google voodoo stuff?

@Plamen
Have you checked the index for new duplicates of your listing?

@Mike – there are no duplicates. I’ve checked by phone, address, company name… and nothing.
Solution: going to Africa to learn some voodoo magic so I can deal with Google properly.

@Plamen. I think that is actually why Places is having soo many issues. The algo is being directed by Voodoo magic shamans.

Hallelujah! The problem is in the web site. I was trying to get fast citation with using wikipedia url to bump my rank. Changed the site and now everything is fine.

[…] in the Maps arena to improve the quality. As recently as last September, this reporting system was behind Google’s stated commitment of fixing geo errors in 30 days and there still was some reporting […]