Just How Many Local Searches Were There in June?

The Comscore Search report for June has been released. Google had 10.29 billion searches. If roughly the same percentage of searches (20%) had local intent as Google has indicated then there were approximately 2,187,200,000 searches in the U.S. on Google’s main search site last month that were local in nature.

Across all of the search engines, again assuming roughly the same % of local intent, there were 3,187,000,000. A billion here, a billion there, pretty soon you have some real numbers. 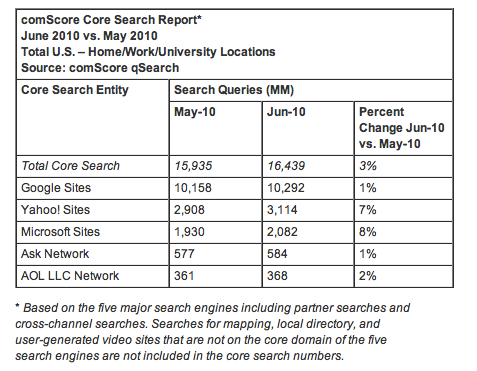 Nice extrapolation of the data, really proves that bricks & mortar businesses need to be findable in local search.

I don’t suppose you’d know where I could pull similar data for Australia?

But how commercial is local search? When I talk to small businesses they do not believe it has great value to them (and not just the uneducated ones).

Like the old yellow pages certain industries benefit much more than others. Restaurants, hotels, computer repair, plumbers, lawyers and jewelers are all examples that have benefited tremendously from local search. If in doubt read these comments from a jewelry client of mine and feel free to share them with your small businesses.

Local search starts to but very important (but not already on Google). What about ‘generic’ websites, that are not related to a place? Will the be less well ranked?

By the way, if Google used geolocation as they do on the iPhone for instance, maybe results could be really more relevant.

Which businesses don’t think that local search has value? What a great opportunity to compete against those businesses. Lemmee at em !!

This is good data to show. If 2 billion (2 thousand million in AU / UK I think) searches are happening in the us alone for just local based searches, that is enough of an incentive for people and businesses to get out there

I am sure it is safe to assume that when a local seo guy evalluates the market for certain key words, they can spend hours upon hours researching and testing various keyword locations around a city or region.

Does anyone know if there is a way to get an actual representation of search volume generated from customers searching locally for products and services minus external skewing factors such as those mentioned above?

SEO guys aren’t going to be doing random searches in Google: the results are skewed based on their own browser cookies, and they know it. There’s many suites of tools that are much, much easier to use – Google’s own Keyword Tool among them – that don’t skew the statistics and provide more relevant data.

Doing random searches would be the hard way.

One thing that is absolutely certain: the level of SEO guys out there in comparison to the general population is minimal at best. Even for the few that are using a sledgehammer to place a pushpin, they’re not going to be tipping the scales in any significant way.

It is hard for me to imagine that anyone visiting this blog is unaware of the importance of Google Places. Dentists, rug shampoo, florists, bike shops, bakeries, general contractors, auto parts stores . . . Our clients are all benefiting. The seven pack is obviously very, very important. For some in the emergency services business, being number 1 is worth $1000’s of dollars per DAY. But I can track lots of activity for clients who are, at least for the moment, not in the 7 pack for every single keyword, but are still getting hits for searches that are a page or two back.

I love the doubters. For 9 years folks didn’t argue with the B.S. studies about usage from the yellow pages, yet much of the calls are from those telemarketing clients for services by finding them in the book. This local search thing is huge. Just think about what it holds in the future with mobile geolocation targeting and results. Just as mobile is impacting print, it has also taken share from Outlook eMail, TomTom type navigational devices, handheld gaming devices, and laptop computers or other web browsing devices. This local search thing will continue to grow. It will be the biggest impact of the decade for buyers and sellers. Not a great time to invest in traditional media folks!

Great job breaking some honest estimates down for us Mike!

btw,16 billion ain’t nothing….. there were 33 billion videos viewed via the web in April…

With numbers that high,m it’s hard to believe that Google only started monetizing Google Places so recently, with tags (though tags are probably the least efficient way of pricing local paid advertising)

Still, that’s presumably 20% with transactional intent. That’s were the money’s at!

It’d be interesting to know what % of those searches are coming from which devices…eg; mobile phones vs web search from home computer.

Mobile will be 50% in 1.5 years…. where are the real stats that offer segmentation and the ones from TMP 15 Miles that showed local fragmentation breakouts?