TomTom – When is a Lifetime not a Lifetime? When it refers to TeleAtlas?

Its tough being TomTom. They are in an industry that is being cannibalized on the hardware side by low end devices and their very expensive purchase of TeleAtlas is being quickly deprecated on the software and underlying data side. That being said does that give them permission to be low-lifes in promoting their geo products? They have done so before but still I think not. I received the following ad from them yesterday: 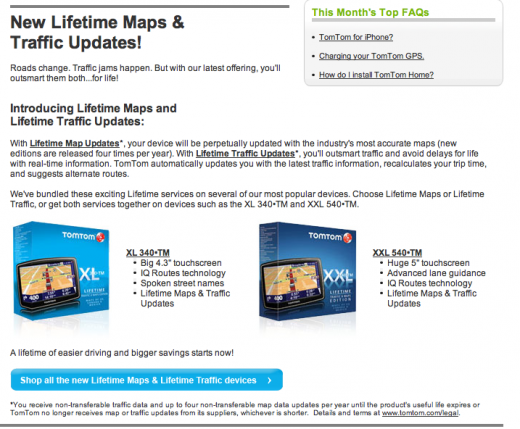 The word Lifetime was used 11 times in the ad and it caught my eye. Just like it was supposed to do. Lifetime means just that: a lifetime…lifetime of what though? My lifetime? No that is too expansive. Lifetime of the equipment purchased? Now that makes sense but no…

*You receive non-transferable traffic data and up to four non-transferable map data updates per year until the product’s useful life expires or TomTom no longer receives map or traffic updates from its suppliers, whichever is shorter. Details and terms at www.tomtom.com/legal.

It would seem that a product’s useful life could mean many things but it certainly doesn’t mean the lifetime of the product other than by their definition. But the limit, imposed by TomTom, of no longer receiving updates from its suppliers seemed particularly suspect…they own the supplier, no? Perhaps it was an unintended irony that comes out of legal but then again maybe TomTom knows something about its “suppliers” (ie TeleAtlas) that it is not telling us?

Hey Ahmed….yes, they not only need a new ad agency they need a new lawyer… 🙂 You know how much I like this sort of advertising

Hi, Your prediction has come true! TomTom has announced the termination of their Go Live service due to AT&T terminating their 2G service. I’ve owned my TomTom 2535 for less than 6 months…..so I guess that’s a LIFETIME!!!!!

If i bought a new tomtom today, June 2016, how many years does the statement “LIFE TIME” mean??? with free maps etc. Thanks.