Today on the Lat-Long Blog, Google has announced that they are now using their own underlying geo data instead of TeleAtlas data. The move mirrors the move made in the US when Google replaced TeleAtlas data in October 2009.

Here is their announcement:

The map of Canada is constantly changing – new roads are being built, highways are being renamed, and bike trails are opening. To keep up with all these changes, we’ve started using new map data in Canada. This new base map is built from a wide range of sources, just as we recently announced for the US in October. In Canada, we’ve made use of data from organizations such as the National Hydrography Network and Canadian Council on Geomatics. Once again things like satellite imagery and Street View were also helpful to make a rich, thorough base map.

You may notice some changes like seeing a full map of your former campus, but overall the look and feel of Google Maps will be pretty similar to what you’re used to. One of the biggest changes is that now you can give us direct feedback about our map of Canada – let’s say a new park has just opened in your neighborhood. You’ll notice a link that says “Report a Problem” in the lower right corner of Google Maps when you’re looking at Canada, which will let you send your updates and feedback directly to us. We’ll review it as soon as possible and keep you posted on the status of your report. We want our map to be as up-to-date as possible and reflect what’s important to you, and we think these changes will help us with that goal.

The move, while predictable, foreshadows a time when Google has replaced TeleAtlas in every country where they have adequate StreetView coverage. The move solidifies Google as a major player in gathering and vetting of geodata and puts them in direct worldwide competition with both Nokia’s NavTeq and TeleAtlas. For more insight into the implications of this move read my SearchEngineland interview with Mike Dobson. 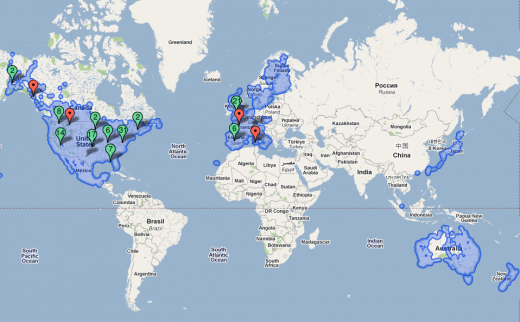 Will digest this, and test for all clients…but the simple fact that G is now using more updated map data is great news!!!

I think you will see much the same as we saw here….lots of places initially missing or wrong…lots of gnashing of teeth…but the big advantage of the report a problem link is that Google can and does fix the problems in a timeframe much shorter than TeleAtlas. Not 30 days like they originally promised but there has been measurable quality improvements.