Who gets the Traffic in the Local Space

The year has been an interesting one. The recent conversation of a possible acquisition of Yelp by Google motivated me to create this chart comparing traffic for the larger sites in the Local arena.

The year started with Craig’s List and Mapquest holding a small lead over Google Maps. Citysearch held a solid fourth and Yelp rapidly bringing up the rear. But the rapid growth of Maps and Yelp, the steady decline of Mapquest and CitySearch has created a significant change in standings: 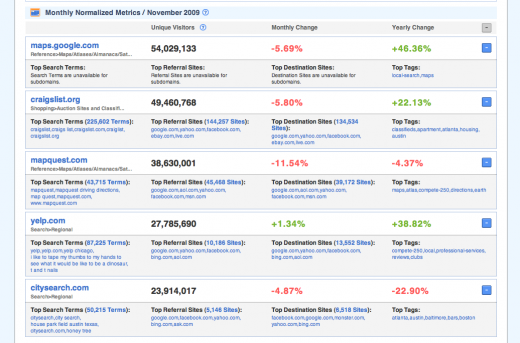 There are a million ways to look at who has done what in local and this is but one. Here is the URL for the Compete charts. Head on over and add your own favorite local site to see how it has fared and let me know.

When you look at these numbers, it makes the now off Yelp-Google combo look like a market dominating matchup.

I can say with almost certainty that Google will make a local directory/review purchase this up coming year.

They are already leading the landscape, just needing to refine their algorithm and gather more accurate value added data.

It will be interesting to see what angle they take.

It will certainly be an interesting year. 🙂

I believe it would be safe to say that Google has a much larger share of local search. It’s reasonable to assume that a good portion of traffic with “local intent” is generated by the 7-pack results displayed in the organic results. The majority of that traffic goes straight to the website of the listing, and never makes it to the maps subdomain.

I base that last statement on data from LBC Analytics that show the same trend across multiple client accounts that are listed in the 7-pack.

The “Clicks to your website” action ranges from 600-1500% more than the “Clicks to more info on Maps” action.

I couldn’t agree more. In fact about a year and half ago I wrote a post that did a back of napkin calculation that Google.com had roughly 650% more local uniques than Maps. I made a similar argument here.

But Google needs an ever increasing number of eyeballs to show ads to and right now that growth is in local. To some extent the lead in local will translate to a dominating position in mobile. So from Google’s point of view, why go for half a loaf when you can go for the whole thing.

Great graph Mike and sheds a bit-o-light on the Yelp deal for sure. I think that yelp’s focus on reviews is very important to Googles sentiment progression for having results based on real human thoughts of a business.

I think that local results will move this way for rankings ultimately, because it will rank businesses according to people’s perception of the local SMB in the market and truly return the top 5-7 local businesses based on local opinion.