Sometimes Google Maps just has a brain fart. Life will go along and all will be good with your listing. Then, for no apparent reason, it just forgets things. Not insignificant things like the year you opened or the special brand you carry but important things like your listing’s URL or its correct location on the earth.

Late last week though, I saw a strange one. On the surface it looked like a record had been hijacked. The reality was both simpler and more complex than that.

You may recall Podesta Baldocchi Florist in San Francisco. They are the poster child for the great family run urban florist. They have been in business since 1871, have a great reputation in San Francisco and have been owned by the same family for many years. They were one of the many unclaimed florist listings that was hijacked in September of 2008 via the community edit feature as part of an affiliate fulfillment scam. They actively use the internet for marketing and have checked their Maps record every day since the hijacking.

On Thursday of last week I received a desperate email from Marc, the owner of Podesta Baldocchi. It read: Help! Our website on the Google 10 pack has been hijacked again. I am trying to understand why and how to get it corrected. Any assistance would be appreciated. 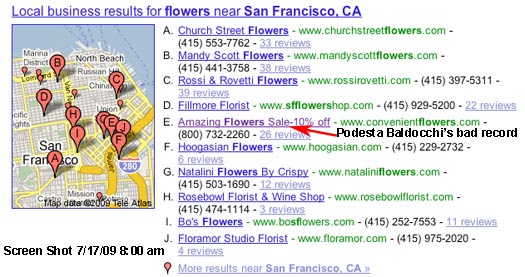 Fortunately it had not been hijacked but his record had reverted to both an unclaimed state and taken on all the attributes of the original hijacking from almost a year ago. Maps seemed to have just forgotten that the record had been claimed into the Local Business Center after the community hijacking and somehow dug up and reinserted all the information from that event 10 months ago. It had been hijacked once and suddenly had become ready for a second round. Do hijackers hijack already hijacked records?

It seemed a simple matter to just reclaim it and bring it back into the LBC. Upon investigation a duplicate record showed up as well in the index and I thought it would make sense for Marc to go through the claiming and duplicate removal process for that record as well.

After 20 emails back and forth and several phone calls it became obvious that it was not your typical unclaimed record….

Nothing Marc tried would allow him to claim it even though it was obviously open to community edits. Every attempt at claiming it just took him directly to his Local Business Center account with no additional information and no obvious next step. By the next morning he had become very frustrated and I asked for his log in.

As a side note, he did manage to snag the duplicate record but like many an unsuspecting SMB, he unknowingly suspended the record which could have caused his whole cluster and his listing to be lost from the index.

The fix? I went into his LBC, opened the main record for editing and resaved it. The record immediately showed as claimed in Maps and within an hour the Local 10 Pack was back to normal. I hadn’t thought of telling Marc to try this as it is something I do relatively often without thinking about it.

The takeaways?
1)Maps is a complicated system that is not always easy to understand particularly in the SMB market for which it was intended

4)The interface in Maps & particularly the LBC leads to end user errors. Suspend a dupe? Delete it?

5)Direct access to the record (which only Google has) and familiarity with Maps could have solved this problem in 5 minutes instead of 24 hours.

6)”The Cluster” works in mysterious ways

Google has created a powerful system in Maps and the Local 10 Pack. Now it is time for them to invest the energy and money to finish it, focus on the bugs and the interface design. If these problems are unavoidable artifacts of the complexity then (to beat a really dead horse) then Google needs to step up to the bar and put in place a system for support that is robust and comprehensive.

As Marc, who has the profile of the perfect target audience for the LBC, said: I do hope Google will step up and provide more robust support as things do and will continue to happen.

Can I ask for clarification on one point? When you signed into Marc’s LBC account and claimed the ‘main record’, do you mean that one of the records still said Podesta Baldocchi, while the 2nd record said Amazing Flowers?

Marc was very lucky to have your assistance on this. He must have felt like he was falling down an elevator shaft.

The cluster holds all sorts of information, right, wrong, old, new. When a merger occurs information in the cluster is given precedence over information coming from the LBC (that merged info may come from another LBC).

In this case the main record I am referring to was the LBC listing for Podesta Baldocchi Flowers that was in his LBC and was conflated with the Amazing flowers data that was in the cluster but not the LBC.

The 2nd record that was now in the LBC was the duplicate Podesta Baldocchi record that Marc had claimed and was attempting to get rid of.

Wouldn’t it make sense for Google to “cleanse the cluster”. Once a hijacking had occurred it would make utter sense to delete that information from the cluster to prevent changes of this sort.

We have data bases in our systems for various businesses. We work to clean the data. Why doesn’t google do something like that?

Google keeps everything as I understand it. The question is what they do with it. Some things like LBC data get prioritzed. Other things get deprecated and the really bad stuff is used to train the spam system. My sense is that no data has no value.

The question is why would this stuff show back up? My working theory is that Google set some flag at some point that latter caused trouble. Without an engineer to chime in here we will never know.

I do not know enough about large scale database design to pass judgement on the db archtectural issues.

Gotcha – thanks, Mike! It was good to refresh my memory about clusters, too.

Or they don’t even provide you with a cluster. I have a client I can’t even get into a cluster. he’s one of several businesses in the area. I’m not sure why or how Google is not generating a 10 pack – in this case it’s a One Pack. It’s not even a cluster – more like a cluster @#$*# . I’d really like to understand why it happens in some cases and not in others.

As for Marc trying to delete the listing – remember what Google said ” hang tight and wait” or some type of derivitive of that. Up here in the Great White North – Google won’t even allow us to delete listings at all. We’re having the same problem as Marc did. Takes us to the LBC with no option to remove. *sighs* I feel like the ugly step child. Does Google not love us like we want to love them? *heavy Sigh*

This has happened to us too! we had claimed a listing for Mantra Circle on Cavill and recently it has become unclaimed and is now being abused by spamers.

We have just now submitted to have the listing claimed by us again, but it seems this isnt an isolated issue.

You are right, it is not isolated. I have seen several postings in the forum and received at least one additional email of similar occurrences.

Thanks for the great post. What is the quickest way to communicate our concerns about hijacking etc. with Google directly. Any thoughts?

Well its one thing for you to communicate, its another for you to get in touch. (see Miriam’s not so funny post Neil Diamond’s Musical Plea To Google Maps).

Google has a spam reporting tool and the help forums but it would be oxymoronic to to use the words “quickest” and “communicate with Google” in the same sentence.

What is the quickest way to communicate our concerns about hijacking etc. with Google directly. Any thoughts?

Hmmm…I would have to say take out an ad in the NY Times. 🙂

Since we are on the topic of Google & brain farts… has anyone ever received an error message ” address undefined ” when trying to enter a listing in the LBC?

Tying to figure out Google maps has been a challenge, your information is really helpful to understand how it works. I had a site that was regularly coming up in Google map results then one day disappeared.

I have never come across something like this and just that i have got my share of learning from your post that something like this can also happens I have always used Google Maps and it has always served my purpose.Its little scary to know that such think can also happens but now that i am prepared to face this kind of situation , m fearless about ti.

Yeah this is a great post. Maybe this explains why after several months, I have duplicate listings for teh same address, and despite community edits the date wont merge with the live listing?

The bummer is the non live Google listing has stolen all the web data from the Google hi jacked listing.

Can anyone help me? Google does not respond AT ALL!

They have a Google Maps web site where supposedly you can get help from Google Maps Team. Back in the old days that was true. Lately though, they don’t respond to anything I have seen.

It’s weird. It’s almost like they don’t care anymore about the many many many problems with Maps that still have not been ironed out.

I think that they do respond to things posted here though. Mike has become the new Google Maps unofficial helper. Sure wish they would merge my local listings data once and for all and stop creating news ones when i already have a live one.

Also has anyone noticed the new ” Request Verification” link in the LBC?

It’s not that. I have live listings. It is just that the Google created and unverified listings stole all the web site data from my live user created listings, moved to a different address marker and killed my rankings.

SO I used community edits, moved the marker, changed the name to what is is supposed to be, and the data still has not merged after more than a month.

It is s huge problem. No one ever helps.

If you claim the listing, then you could get banned for multiple listings for the same location. So you are screwed.

@ PM –
Yea I get what you are saying. I had the same thing. Some how Google snatched an unverified listing for one of my verified listings for a junk hauling company. My VERIFIED listing went POOF. Disappeared off Maps and this insulant unverified listing tried to take it’s place. Stole ranking, etc. etc. So rather than claim that lisitng. I just did an edit submit for the verified listing and that kicked the imposters butt and my listing once again reigned supreme.

@Joan: But in my case the unverified listing IS NOT live. It does not rank. Instead it is stealing all the data from my live listing, depriving it of the data that would allow it to rank higher.