What is Location Prominence? 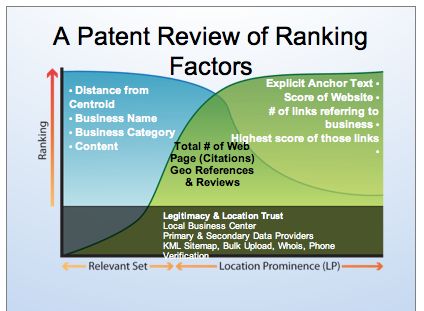 In the local space a number of us have reported on and studied factors that affect ranking in Google Maps. One factor that has been difficult for us to qualify, much less quantify, is that of “Location Prominence.”
In the organic world all are familiar with the concept of PageRank, a reiterative view of the web that ranks a website based on the strength of the links coming into a site. Google wanted to fundamentally change how local had been done in the 2004-5 timeframe and looked to create a similar system to evaluate and rank business listings in the Maps index. Whereas PageRank is a heuristic number used to rank websites, in the system that Google engineers came up with, they termed the analogous collection of Local data points the “Location Prominence Score” to rank local business listings.
In some ways it is perhaps a more robust deployment of the PageRank concept into the geo spatial world of business listings. It seems to embrace all that PageRank was intended to be, and added a significant component of geo references to the mix. PageRank scores commonly available today represent a general indication of the strength of website. The Location Prominence Score, if we could see its value, of a business listing would probably provide a similar insight as it relates to that listing.

For those of you that have not read the patent here is a salient summary of the concept from the conclusion of Google’s patent filing on Scoring local search results based on location prominence. Here is a relevant description of Location Prominence from the patent filing:

[0074] It may also be possible to use the factors to train a model using machine learning techniques. The model may be used, for example, to determine the probability that a user might select a particular document in the search results.

This patent filing is from 2004 and to the best of my knowledge has not yet been approved. Bill Slawski has discussed this patent in a fair bit of detail. What follows is a specific look at the ranking factors that Google considered in the patent. Much could have changed in the way that Google currently calculates rank but in this summary you can find many of the attributes that were identified in our research last summer and in David Mihm’s Local Search Ranking survey.

Here is a breakout of the set of factors that are prioritzed in the Patent:

You can see how Google has expanded its reiterative PageRank thinking to include non-website-based factors from across the geographic web. Local Search indices evolved when very few small businesses had websites, making it essential to come up with an alternative to PageRank that could use the information that was available at the time.

Google, however, didn’t limit themselves to these five above factors. The patent assumes that geo information across the web will change over time but not in a lock-step fashion across all industries. There is the implicit assumption that available information about any given business will become richer over time. Low-signal industries might rely on the simpler geographic web information while high-signal industries that are very competitive might move closer to the traditional link-based web ranking model, with important geo enhancements.

There was general agreement in David Mihm’s Local Search Ranking Factors survey as to the need to be located in the geographic area searched and to have appropriate categories related to the search query. Those elements allow the business listing to be considered relevant to a particular local query. It appears that this concept of Location Prominence Score when combined with the relevance factors form the core principle behind Google’s ranking.

Brilliant analysis, Mike. I love the point-by-point breakdown in the tables. This’ll be a reference for months to come.

May I ask you for a little further illumination on one point? The situation of adjectives associated with a business (noisy, dirty, etc.) – you mention that you feel this may determine relevance. Would you expand on this a bit? I’d like to hear more about this aspect.

You see the enhanced listings with reviews in the former and a Universal Local result in both.

That seems to me that they are in fact using those adjectives to establish a group of eligible listings to return much like they would category or business name.

In fact I’ve been following his patent writings since he published this piece in 2005; http://www.cre8asiteforums.com/forums/index.php?showtopic=26893&hl=

Incidentally in Feb 2005 Google essentially implemented the parameters of the above referenced patent as it applied to local business sites w/in organic google search (google.com). It absolutely created a relevance for local businesses, that prior to that time was simply not there.

Several things that Bill has repeatedly said with regard to patents:

1. It tells us what the SE’s are thinking and where they are going.
2. You have to test the results to determine what is or is not being applied.

Ultimately of course, assuming Google is using “all” of the elements of the patent, we never know to what extent they “weigh” these elements, nor do we know if and when they change the weights.

In any case this is a thorough review.

@Dave
Thanks!I am hoping that by bringing this particular piece of the patent to a greater readership, others will determine which parts are currently being used and appropriate ways to measure their weight.

Excellent piece of analysis. Hope you get it out to that greater readership!

Thanks for the further explanation, Mike. It certainly looks to me like you’re right about review language being used to create relevant matches. That’s actually very cool to see! I wouldn’t typically think to search for local businesses with these kinds of adjectives, and the possibility that one might be able to search this way is almost a new horizon, really. “Trustworthy doctor,” “decent lawyer,” “friendly church,” “caring counselor” and “ethical business” could create a new, refined landscape of search data for people looking for something really specific. I’m used to this approach in Organic/Universal Search, but in Local, this feels new to me.

Thanks. I wonder if Google does this in all segments or if it is more likely in those with lots of review…ie hotels, restaurants…

A search for ‘good marriage counselor san francisco ca’ appears to be pulling adjectives from CitySearch reviews. So, there’s one.

Upon further inspection the search in Maps for clean Hotel turned up some very “impressive” category spam.

So then I checked checked further on the search “good hotel” and found a bunch of spam from my “favorite” affiliate spammers, Reservationcounter.com.

Thanks for sharing your understanding of location prominence – super!

[…] search, a citation is an important, if not the most important, contributor towards your quest for local prominence. Let’s […]

[…] Web references, they just didn’t know what.  He went back and pulled out their patent on location prominence and they layered the patent over their research.  It matched up pretty well.  Location […]

[…] one that is often very different than how they rank non-local queries. In Google Local Search, location prominence is basically akin to the old school PageRank. It’s what you have to prove in order to earn your […]

[…] that mentions of primary business information help with ranking in Google Maps, according to Google Maps’ patent, local search experts, and a quantitative study of Google Maps they […]

[…] / Analysis: What Is Location Prominence? (Mike Blumenthal) Yes, I could have nominated the Local Search Ranking Factors for this award but […]

[…] finding them on your own, I would suggest a similar procedure. Identify locally prominent sites (ie news, hyperlocal blogs) that have a strong presence in the market and occasionally or […]

[…] Mike’s article on Location Prominence, it is a must read if you consider to take Local Search seriously. Share and […]

Thanks for providing info on Scoring local search results based on location prominence.

I was searching for this ..