Geotagging of photos, a common georeferenced data type, is gradually making its way into the mainstream. There has been a clear and steady integration of the technology into consumer products and a growing consumer awareness of the feature. Android and iPhone now automatically geocode images and iPhoto has recently been upgraded to include the ability to geocode photos. This all is making it easier for end users to learn about and implement geotagging in their personal workflow.

In a late 2006 piece, When will GeoCoding impact Local Search? I noted that it might be 5 years before geotagging of images was widely adopted throughout the marketplace and it had significant impact on local search. We are definitely well along that path.

Flickr and Panoramio have long had the capacity to geotag and display these images in a mapping context. The use of georeferenced data sets is rapidly increasing across the Internet and particularly within Google products. Google Maps added the capability to show geotagged photos in a given area. Google has added geotagging to Blogger and Maps has long been indexing KML files & the related photos for georeferences. Clearly Google Maps & Earth like end user generated georeferenced data and photos.

Now however, business listings within Google Maps are boldly showing geotagged images within the User Content area of the listing. It appears that Google Map’s actually loves geotagged photos when they come from Panoramio and there is every reason to believe that it is helpful in Maps ranking. 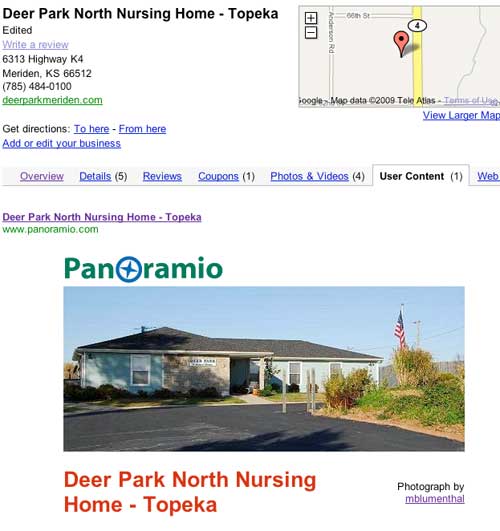 Having an image like the above included in your business listing at Google involves a few simple steps:

If the image is not already geotagged when it is uploaded then you must go through the steps to do so within Panoramio.

You should add the business name to the photo title and business name & street address to the comments. This will allow the image to be clustered correctly with with your Google Business listing.

A note will appear indicating that the photo needs to be approved before inclusion in Google Earth. From my experiments it takes roughly 4  weeks for these images to show up in a Google Maps business listing and one presumes that not all images are approved.

There has not been testing to determine if in fact the quantity and quality of  references showing in the “User Content” tab affects ranking. But given their highlighted position it is likely that Google is signally their importance. If “citations” are the new link than it appears that georeferences are the new citation.

Regardless of any impact on ranking, the size of the included image confers a certain visual authority and stature to the business record in and of its own. It is “buried” within the record and not that many folks will see it but the effort is minimal. There is the added benefit that the image will also be included in Google Earth and in the general Google Maps image search.

Welcome….I just went to CitySquares and it wasn’t clear exactly where you are doing this. Could you elaborate a touch?

You bet. Here’s a quick sample of a location page.
http://ma.citysquares.com/somerville/davis-square

The pictures are on the right side of the page just below the Zipcar ad, and are pulled in from Panoramio. They open up in a layer over the page, and credit Panoramio, of course. These pictures rotate. It functions the same way across the entire site.

Ben – do you get much traffic back from Panoramio or from the neighborhood photos on Maps?

Are you going to implement at a business level in addition to do it at the neighborhood level?

Always with the good questions Mike 🙂

We just implemented Panoramio about a week or so ago actually, so it’s hard to say just yet. When we had flickr in there before we didn’t really get any sort of traffic. We ultimately replaced it with Panoramio because the photos they provide are very relevant and also more appropriate then the pics we sometimes saw from flickr.

Panoramio images for standard (free) business profiles is definitely a consideration for us and something we’re looking at for the next upgrade to our profile templates coming later this quarter. This is obviously much more long tail than say city/town/neighborhood levels so we’re really interested to see what kind of inventory is available first.

Sitting in the sticks, with limited opportunities to “touch” products like yours, the only way I can learn is by asking. 🙂

Would love to hear back from you on the results!

Awesome, I’ll report back once we get some good data!

Neat tip! Hmm…I have to think of something I can try this with. I want a hands-on experience.

Great tip as usual Mike. I’m going to try this out for a few of my clients and will let you know what I find!

I’ve been doing this for some. But I think this only works in large volumes or in area’s where the LBC is not available (In those area’s UGC will show up in large quantities ! )

You need to set a proper goal on what to achieve with putting your images online, I can think of branding or bring people to your storefront.
I doubt it will influence ranking though. Just creating greater visibility in the search engines.

[…] has been integrating Panoramio images into Maps and Maps Business Listings for a while. Now they are integrating them with Streetview. Greg Sterling has an interesting […]

[…] images and video hosted within Google affiliated websites – this means YouTube for video, and Panoramio for image […]

I’ve seen people recommend not uploading images directly to Google Place pages but rather linking to geotagged photos that have been placed on Flickr or Panoramio. Anyone have an opinion about uploading versus linking. These folks are advising build the photo sharing citations first so that you can link to the photos when you enhance the Place Page.

Also, any problem with placing the exact same photos on Flickr & Panoramio?

In the spirit of sharing…here is a tool I came across today that seems to work beautifully for adding geocode information to Flickr images. (Not my website) <a href="http://labs.sumaato.net/tools/flickr_geocode_bookmarklet/"Flickr Geocode Bookmarklet

@Andrea
It makes sense to use photos as citations and it makes sense to upload photos to Flickr and Panoramio that are geocoded and associated with a listing. I can not see any benefit in linking to those from the listing. If they are properly crafted they will associate with the listing on their own. Google has a limit to the number of photos so I suggest using Google and another service. The only problem with using the same photos is that they very likely will end up on the Places Page twice.

Andrea, that link is broken. Here is the new one: http://labs.sumaato.net/tools/flickr_geocode_bookmarklet/

Mike, have you got some tips on how to get Google to associate a Panoramio image with a listing? Is it done simply by “mapping” it? Can you also include NAP?

Apologies for the late post on this one…..think im a bit of a late starter.

I have been using Picasa to optimize and upload to my places listing and have recently been looking at Panoramio.

I know that GeoTagging can be achieved with both so my question really is, does optimizing photos and images with Panoramio have any advantages over Picasa or are they very similar in terms of optimization?

@Gavin
I have not looked lately but last time I did, the Panoramio images were more likely to show up on the Places page.

@Mike
Thanks very much. My main aim is to upload the pics from Picasa to my places page so as long as panoramio and picasa have the same SEO benefits, i think picasa may be better for me as this will avoid duplication of pics too.

Thanks for the advice

I have one issue with Panoramio. When you set up the account, there is a frame with this message & link “Connect your Google+ account to Panoramio”.

What would you do if you have multiple pages (and locations) on the same dashboard?