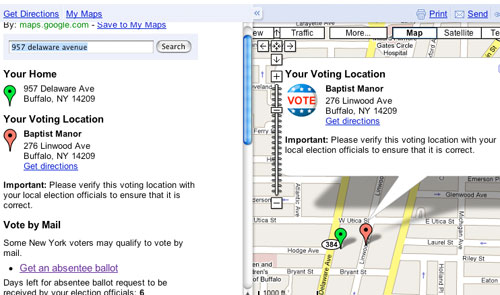 In late September, Google Maps rolled our Map.Google.com/Vote to provide a single source of voting information for every location within the United States. However, two critical pieces of the voter information program, polling location and directions, were promised for a mid-October rollout.

The polling information is now live in Maps, and the Voting Maplet. Google is also making this data available via a separate Polling Location API, that they are releasing to select partners for this election cycle. In the future Google would make this available to all users, but noted that they aren’t yet ready to open the API up to the world at large. You can read Google’s announcement here.

How the polling location query deals with address ambiguity is interesting. On this query where the city was left off it offered up the following: 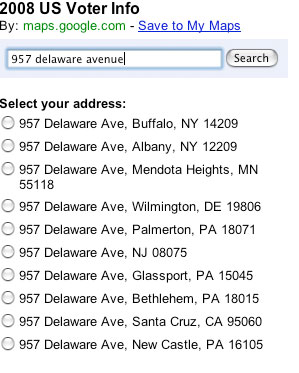 It is a great example of the power of deep local data to play a role in the national conversation and to facilitate the voting process. My hats are off to the Google team for a creative app! Well done.

This is a great application. I know many voters sometimes get discouraged when it comes to voting time to have all information on where they can go.

Yes, its very impressive. I wonder who the “select partners” for the API are?