Over this past year one of my most frequently read articles was Which On-line Directories provide details to Google Maps (Nov 2006)I decided to revisit the current data (Thanks to Miriam at SeoIgloo) to see which directories Google was using for the restaurant industry and to see how things had changed. I also realized that this might provide some baseline data to answer the question of whether Google’s relationship with CitySearch had changed.Google Maps attempts to gather authoritative details of a local business by crawling & parsing the semi-structured data of on-line directories (see also Bill Slawskiâ€™s patent summary). The restaurant industry is one of the industries that clearly benefits from local search. I have analyzed the local listings of the first 16 restaurants listed in the Buffalo, NY market and summarized which on-line directories Google is currently using and compared them to those used in November of 2006. There are some interesting differences.

Some observations and notes and additional findings:All of the listings were of locally owned restaurants and unlike last year there were no chain restaurants or hotels in the top 16 listings – a distinct improvement in listing qualityOnly one restaurant had edited their own business listing. While this is the same as last year, last year it was a hotel that had done so. In that very limited sense, restaurant’s have just barely started to control their own records.There was one new restaurant directory being referenced: Allmenus.com with 6 entriesThere were 7 directories that were no longer referenced in the restaurant listings. Six of those directories were hotel specific directories. With the improved quality and focus of the restaurant listings, it is understandable why they were not being used.CitySearch.com was no longer being used as a reference directory by Google. This compliments the reports of their reviews disappearing and appears to confirm that they are gone from Maps.SuperPages is listed with less frequency than last year.Note the difference in the OneBoxes from Nov ’06 and Now: 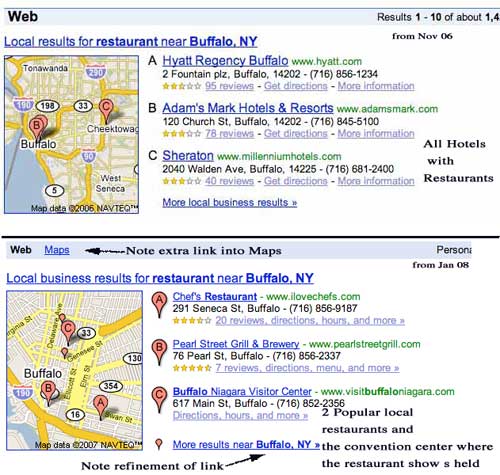 […] the organic results. My inclination is to say yes as my perception is that Googleâ€™s local results have improved over the past […]

[…] were gone. I verified that on a specific and general basis as recently as January 6th. A reader has pointed out that they […]

[…] the past I examined which review sites were being used by Google in Maps for Restaurants in Buffalo, NY. While the […]