TLDR; Google has reduced the visibility of posts in both mobile and desktop search while simultaneously increasing their reach by now showing them (at least some of the time) in Google Maps.

At the end of September, Google upended the visibility of Posts on both the desktop and mobile. On the desktop posts have been moved to the bottom of the Knowledge Panel. These days that often means below the fold.

On mobile, Posts were moved from the Overview panel to the organic results belown the Knowledge Panel. The Posts tab remains in the mobile KP.

In both cases Posts have become quite a bit less visible to searchers. Nate Somsen of Big Leap kindly shared some analytics that clearly shows the significant drop in click though rates after this change. Nate noted that this past August they had just started seeing sizable gains by going to a Coupon post and while not all of those gains were lost, many were.

Certainly for businesses that need to get the consumer to their website to consider a Post successful this change will likely lead to a   significant traffic loss.

For businesses that have been using Posts primarily for branding and SERP control the impact will be less.

The good news in this is thatPosts are now also appearing in Google Maps on both desktop and mobile searches. Previously they were only visible in a browser via direct brand search or via the Local Finder. It seems unlikely that the increased reach will make up for the decreased visibility.

Oddly Posts are only visible in Maps when you click into a listing from a keyword search and they are not visible via branded searches in Maps. 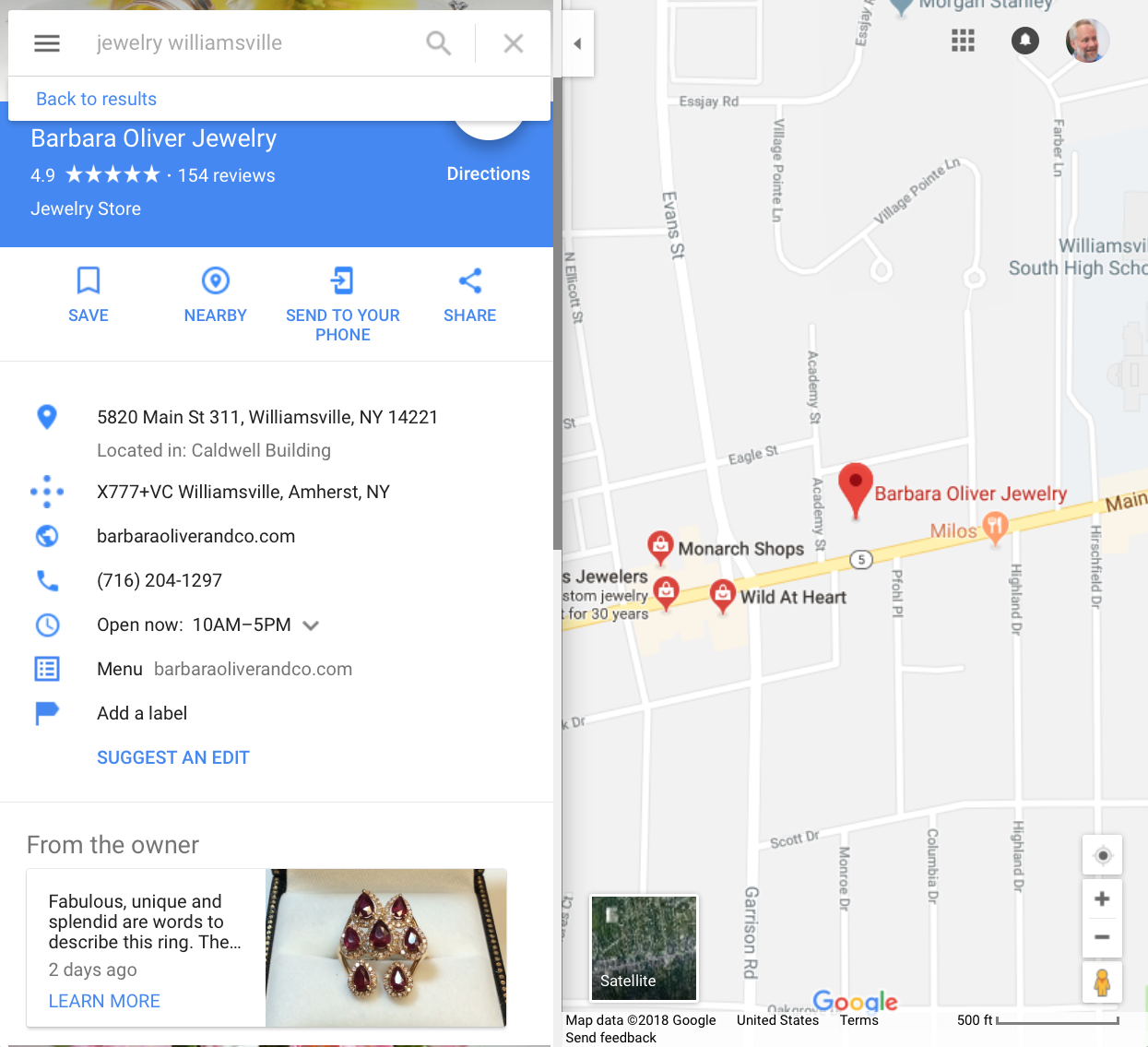 Several readers asked me why Google made this change. We will never really know as we can’t see what Google sees. I am sure if you ask them they would say that it’s what the searchers preferred. If you ask a Google skeptic they would suggest that Google wanted to control user behaviors and not send them off site so quickly.

I don’t really know. And it could be that both are true. One speculative thought is that Google is freeing up space in the prime territory of the Knowledge Panel for an increased use of CTA around their Reserve with Google product. We have been seeing this in more and more tests.

Regardless, at least for the next few months this appears to be the new normal and while it makes posts somewhat less valuable I still see significant value in using them.

Reference Screen shots of Post positioning before and after the change:

I wanted to share, mostly for my memory, screen shots that demonstrated the change.

It probably wasn’t helping google make $$ and they probably sensed it was helping SMB’s.

If it doesn’t help google suck cash out of smb’s they may as well t and it.

Only a matter of time until they monetize Google Posts.

This is really annoying! We were just getting the hang of posting regularly.

Interesting that Post only appears on Google Maps when you land on the KP from a non-brand search.

Post is great but for large businesses it is time consuming. I have some trouble to measure the incremental value of Google Post and really know if this is worth it. The Offer Post has a lot of potential but it was pretty much an offer/discount for branded/acquired traffic and you were only giving an incentive to existing guests but not capturing new guests and driving incrementality.

@Justin
Google has long had a range of free and paid products. Rarely does a free product become paid (or vice versa). I can’t think of a time although it may have happened.

And while Google certainly has been on a monetization roll in local none of that has been by making free products into paid products.

Usually these various products are developed by different teams with different goals. Often the free products look to:
Increase data diversity, accuracy and depth
Provide Google with a greater understanding of the activities of a business
Help Google deliver more detailed data to users.

I see it as unlikely that Google will ever charge for posts. They don’t have to. If they wanted a billable story they could easily add an ad unit. Amd in fact they have and are testing this.

The real question about Posts is, in their new display location, what value to do they provide to the business and how does the business best take advantage of them.

And the other question is whether this reduced view is a harbinger of doom for posts or just a realignment of their display impact.

Thank you Mike, much needed clarification on the latest with Google posts!

Post is great but for large businesses it is time consuming. I have some trouble to measure the incremental value of Google Post and really know if this is worth it.

PatientPop did a good test of this and found that, at least in their limited use case, they saw uplift without a negative impact on the utilization of other links on the KP.

The Offer Post has a lot of potential but it was pretty much an offer/discount for branded/acquired traffic and you were only giving an incentive to existing guests but not capturing new guests and driving incrementality.

Posts do have other value in terms of branding, education, images, providing relevance to long tail activities, occupying space on a page…. and while you are right that some of the KP traffic is traffic that they would have had anyways and a coupon might discount that value.

Finding value is a business by business proposition but given the difficulty when working with large brands, it might not be worth it.

As with most elements connected to a google “page”…Google controls it….never the smb. The endless lesson is that the knowledge panel is Google’s not controlled by the smb. Regardless of what they say, they will do with it what they wish. The KP is not your page–it is google

Currently posts sit below almost everything in the KP. The only thing it sits above are the links to competitors. We all know the further down a page, the less the item will be seen.

Will they move it “up” the page or not? Who knows. Google won’t tell us.

It gets increasingly frustrating to put effort into Google “latest and greatest” ie Google+ only to learn later that it wasn’t worth the effort and or google will kill it.

Even as google is and overwhelmingly remains the majority source of leads off of search…we do everything we can to diversify outside of Google for leads and business.

The more things change, the more they stay the same. Controlling as much of your own destiny and assets has always been paramount. Leveraging the tools that MySpace, Google or Facebook provide to the business need to be viewed as a transient benefit that will likely go away.

but it doesn’t mean you should not use them just don’t bet the farm on them, keep them in perspective to the content you do control and only use them if they provide a consistent and measurable return.

It doesn’t matter whether its Plus or Posts… or Facebook… the approach should be the same – cautious but judicious use if it makes sense to YOUR business.

As an aside, Mike, in the case of one of our smb’s we continue to interview existing customers (because in this case, it is relatively easy).

Well over 90% of the buyers visit the web site. Of the ones that don’t visit the site, they were direct referrals. (and now two of them coming to us via instagram).

My gut is that to the extent searchers in google get to our information, go through the KP and never contact us…we have lost the opportunity for a sale.

Can you do me a favor? Google LISTENS TO YOU. 😉 Ask them to get rid of the KP.

What are the odds of that occurring. 😀

I’m not sure, if that is a good or a bad move. At least, in germany, I don’t think anybody using GMB knows, that there is a possibility to post. Should be great for a large scale set research, what’s delivering better inbound results: google posts over GMB or “News” Blogposts on your page. And how they manage duplicate content issue there…