Google Local After Antitrust – Careful What You Wish For 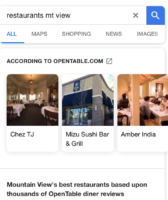 In the EU and the US, Yelp has been actively seeking to get regulators to look at Google’s behaviors in local and to change the search results to stop favoring Google’s own local results.

When a mother does a search for a pediatrician in Berlin, instead of being matched with rich review content from a service like German startup Jameda.de, Google siphons her to a degraded local experience with fewer reviews and less content. In addition to being anticompetitive, this type of conduct directly harms consumers who still assume Google is relying on its meritocratic algorithms to govern which information appears at the top of the page.

Yelp’s argument has long been that their results are better than Google’s and that those Yelp results should not be benched and effectively supplanted with Google’s own Knowledge Panel.

There are problems with that argument. Ben Thompson of Stratechery noted that if you follow that argument Yelp might actually, in getting their wish, end up reinforcing Google’s lead by effectively improving Google’s local product and thus cement their position as an aggregator.

This Google Local test surfaced on my phone yesterday and clearly demonstrates the point. This test, first noted on SearchEngineRoundtable where it surfaced in the context of a featured snippet for the search “top online marketers”, shows how there are a number of ways to skin the cat of local search results on Google.

When you click through to the results for one of the restaurants you see a similar carousel with organic results and review totals for the selected restaurant. Only after a second click the “More about Chez TJ” call to action does a searcher finally get to the local Knowledge Panel.

Yelp has always contended that their results were better than Google’s. And while that may be the case, it is arguable that they are no longer better than OpenTable or TripAdvisor. Where would that leave Yelp? Probably worse off than they are now, buried in the hinterlands of organic search, fewer reviews than OpenTable, with no reason for a consumer to click on their result. And nothing left to complain about.

Mike: I’d be pleased to see the status of Google’s monopoly hold on local search be altered. I’ve been practicing local optimization for a very long time, as you known, and also operate smb’s.

Google’s monopoly position gives them a make and break control over a business: Recent evidence here via an article by your fellow top contributor at the GMB forums, Tim Capper: https://onlineownership.com/small-business-in-leeds-going-out-of-business-because-of-google/#.Ww6okPCm2ns.linkedin

Per the article a business is going to close because Google would NOT police its google reviews. That only has effect if indeed google reviews have a monopoly on human eyeballs.

Its a terrific article for future spammers and sh!thead competitors: The lesson is: Do not concentrate on making your own business better–Just keep writing scathing attacks on your competitor(s)….and google, the monopoly on eyeballs won’t do anything!!!

Scary message. Its sort of a re invitation toward all spammers to reopen the wild west of spammy results, featured by spammy fake/ ripoff locksmiths.

Steal from the public. The monopoly on eyeballs will allow you to do this.

That is just one of the many problems with monopolies.

2. We operate businesses. Our smb’s have twice been impacted by spam on the web, or alternatively a “super secret” penalty inflicted on a business by google in one case, and a second case with attack reviews that wouldn’t be taken down, even as we provided a mountain of evidence that they were faked attack reviews.

So in one case we faced the same problem as the situation Tim Capper described. In the other case Google’s teams of staffers wrongly interpreted a response from a business and penalized the business. It took extraordinary efforts to find the problem and get it changed. Our efforts to correct were similar to what Tim described. A small local business simply cannot afford the time and effort to trying to right a wrong created by google. Small businesses don’t have the resources to do that.

The result is that the monopoly, Google, has the power to make or break businesses. Who gave them this right???

The law?
The government?
The local seo marketers????
Or the monopoly???

Actually its not a RIGHT. Its a power. They have it. They don’t use it with responsibility. You know that. You have commented on that multiple times over multiple years.

4. Bing Local has some richer/better features. Try bing local. Use their “algo’s” for local choices as opposed to Google.

Right now they are richer, more interesting than what google provides.- definitely for restaurants. I use it. It is much richer.

The local map gives more and better info in the local box. It currently includes all hours the restaurant is open…not just opening hours. It like google has the street address. Like google it doesn’t include the phone number.

Where it has become incredibly RICH and informative is that there are two options on the KP associated with MENU. One is the printed menu–like google. The additional GREAT PIECE are photos of the food items.

This gives you a feel for what you will be served. Its an incredibly helpful item.

Google does not offer that

Certain monopolies are more harmful than others. Ultimately they can have dramatic effects on one’s living conditions. That is at the extreme.

I’d welcome google’s losing its monopoly. I’m not the decision maker. I don’t dwell on how to effect that change.

As an operator we have faced similar ci

Yeah, Google has a LOT of power but still falls short of the definition of a “monopoly” (though they’re getting close).

Algo updates, sudden and unannounced changes to their own “guidelines”, changes in their own data sets, etc. etc. make them an impossible entity to control, or even influence. But the FACT that their market share continues to rise is testimony to what consumers have found most useful and reliable. Google simply provides more relevant results, better UX and continues to roll out more features and functionality.

What have you done for us lately, Yelp? Other than cry?

Is Google’s local search program perfect? Ha, NO! But they’re working on it.

Yelp cries :’-( that Google isn’t being nice to them. That Google skews search results away from them and toward their own content.

Yet, in the many local searches I perform daily, Yelp listings are almost always at or near the top of organic SERPs. Yes, below the “Map Pack”, but that’s Google’s product and they can position it where they want, on their own property.

Yelp. What one federal judge equated to the “online Mafia” for it’s sales practices. Where if a local business “pisses them off” regarding their sales, reporting, performance issues, etc. can suddenly find 5 Star Reviews “filtered” and 1 Star Reviews magically appearing at the top of their profile pages. Just stay right here on Mike’s blog to corroborate these facts and more.

Yelp is just pure evil. Until recently, “Do No Evil” was Google’s stated mantra, it may no longer be true in statement or actions.

But Yelp? Please! I sleep way better at night trusting more in Google. Yelp is a direct cause of nightmares and insomnia.

Yelp. That’s the sound a growling, snarling dog makes when it has been kicked in the chops after it has been a “Bad Dog!”.

That is hilarious Mike. Bravo Google.
Yelp thought the Knowledge Panel was a problem, now it’s three clicks away. Next?
I have been dealing with Yelp’s behavior regarding one client since 2014. I tried to call Yelp, I emailed, many times. Even this Ars Technica article (https://bit.ly/2LQz6qD) was not enough to spook them into fixing it. The questionable reviews finally came down. Years later.
Sorry Yelpers, I can’t wait for Yelp to just go away.

@Jennifer
While Yelp is arrogant, a bully and a pita, I would not wish to see them gone…. unless they were replaced with someone better. A Google only world or something approximating that is not something to look forward to either.

Touche’. Google already reminds me of the old AT&T.