Google Local: What Happened on August 1st to Increase Views in Insights?

Earlier this week, Jack Thumser of August Ash in Bloomington, emailed me about an significant uptick in Google Maps Insight’s views in a number of his Google  local listings. Michael Wallace of TallWave noted the same issue on Twitter today.

The office furniture stores and grocery stores have AdWords campaigns with location extensions, but the sheet metal fabricator does not.

Here is the pattern that Jack noted as universal across all of his listings: 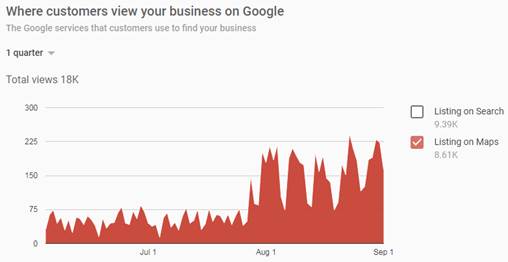 Given the multiple reports, I checked a 12 listing sample to see if there a similar result. Of the twelve I looked at 6 showed similar upticks but 6 also showed nothing. At least in my examples, both search and Maps showed the significant late July/ early August uptick.

I saw the uptick in retailers and restaurants. As I noted, though, only half of the listings I looked at showed the pattern. Many, like this listing, did not.

On Twitter, Joy Hawkins suggested that it might be due to using Location extensions but while that applies to some of the listings where I saw an uptick, by no means all.

And it isn’t universal as Jack noted but the Insights views increase appeared on a large enough sample that it seems more than coincidence. The uptick that I see is across both Maps and search.

I am curious if you saw this uptick, if so is there any pattern to the category for the businesses?

What percentage of your businesses saw the increase?

Are they located within their primary geography or outside of it (ie in the burbs)?

Some other trend that you have spotted?

We are seeing a similar uptick across most of our clients. One client in particular has seen over a 130% increase in views for August across 2k+ locations. Seems to only affect views, not clicks, which makes me suspect it’s a bug. Doesn’t look like it’s photo views either. And as you mentioned, it’s not happening to all locations. Can’t seem to find a pattern as to vertical. We’ve seen in restaurants, retail, hotel, storage, etc.

Maybe has to do with what Joy mentioned earlier in her blog?
http://www.sterlingsky.ca/august-22-2017-day-google-rolled-back-possum-proximity-filter/

There’s a thought. Though if the views increase were legit, you’d think clicks would be up too. For our clients, clicks have remained level. Only a spike in views. It’s odd.

Same here … Only views have increased 3 times… This is for a local Chamber of Commerce.

Same here – views are up but “actions” are not.

What’s consistent for our high volume listings is that the spike is dramatic, sustained, and appears to have no impact on actions. My conclusion: Bad Data. Perhaps they are adding people’s thoughts about a business to the numbers. That would explain it. Meanwhile some clients think they are really kicking arse.

Looking at my clients here in the UK, again it’s not across all of them but those where it is showing, it seemed to happen around 9 August…

We had this very thing happen to 14 of our clients. One client went from 9 million views on maps to 59 million. We talked to support Friday and even got their tech team involved. They are INSISTING its not a bug. We are VERY frustrated because we know these numbers cant be right. FOr example, on the day of Hurricane Harvey we had a TX location go up 150% in views on Maps. We explained this to Google as this is a business that is an entertainment vertical. Google refuses to say there is anything wrong. Also their actions remained the same. So if your views increased by 50 million, shouldnt you seem some sort of uptick in Actions????

Another case is I have a bank who is most in rural locations. Cities with populations of 2,000 people. Average views on maps are about 200. Well in August it went up to over 2,000. Again, these results are NOT right.

We were told unless we have Google Analytics they wont do anything.

We’ve seen this across our clients in retail and hospitality. We were told from Google is there is new way they are counting views, but no further details yet. Our thought is that they are now counting a map pin views separately.

I have a theory but it is just that! Many actually but one is local guides, so think about this we were all notified to help disabled people with wheelchair accessible locations right? So the local guide teams go and click contribute your client or business pulls up and well you just received more views!

Now this explains the increased views and no actions!

I should also add the fact that the clients that were already listed as wheelchair accessible well they would have stayed the same.

This is my conclusion after investigation the clients that had a surge and the ones that did not.

Let me know what you guys think?

Does anyone have any other info on this? We are reporting this info to clients and are not reporting Map views until we get an answer as to what the heck is going on.

@BT
We have asked Google. And Google has confirmed that they are counting additional impressions. It is not a bug.

Exactly what those impressions are of and whether the change is permanent, are waiting to be clarified.

@Mike Thank you! Always appreciate your knowledge and information.

Some info from support today. We followed up by asking them for more info. And they refused to give it to us. They sent us to Google Developers site which has no info. here is email from support:

I just heard back from our team in Mountain View about this. They recently started tracking a new type of Maps impression, which is why your view count spiked in August. Your data should remain at this higher level, so you’ll still be able to track fluctuations in the views of your business.

Seeing this for a client in the finance industry.
I wonder if just appearing in a map search now counts as a view. For example, someone is searching for a pizza restaurant on a certain road. Any other business that shows in the map result gets an ‘impression’.
If this is correct then an uptick in views means more people are searching in your area – only really helpful for local businesses, not offices.

Google is working on a post to explain the change in response to all the confusion.

Here’s the verbatim response I received from Google this morning, which I’m told is OK to share:

“We recently started tracking a new impression type in desktop Maps. In the future we’ll try to communicate these changes better ahead of time.”

We just got more info this afternoon. We arent happy about it as we arent sure why Google thinks this is smart but here you go:

Due to the volume of calls and chats we’ve gotten about local insights, our engineers have decided to share a little more detail with us. Yes, now local insights shows whenever a listing has been viewed – even if it’s on a list of businesses that the user sees, and the user does not directly click on the business listing.

Here’s the verbatim response I received from Google this morning, which I’m told is OK to share:
Due to the volume of calls and chats we’ve gotten about local insights, our engineers have decided to share a little more detail with us. Yes, now local insights shows whenever a listing has been viewed – even if it’s on a list of businesses that the user sees, and the user does not directly click on the business listing.