Ok. I admit I don’t know if Mark Henderson, Google Local Guide Level 5 really did die from caffeine1 but I do know that he reviewed thousands of Starbucks across the Midwest, the Eastern Seaboard and the South last week.

And I know that he is a Level 5 Local Guide and that if he didn’t die, he should, at least virtually. To recognize his extraordinary efforts, he will be posthumously awarded entrance into the Google Spam Hall of Shame.

Clearly Mark is a spewer2. He and several other high volume spewers (aka review spammer persona) were brought to my attention by a reader who recognized my affinity for these sorts of things3. 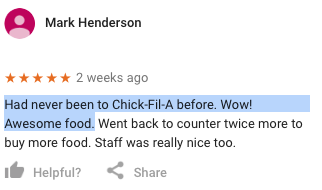 For me this is interesting on several fronts.

If it isn’t obvious TripAdvisor has as many issues as Google vis a vis fake reviews (duh5).

It certainly leaves one thinking that major chains could be involved in buying reviews along with the rest of American businesses. My spewer tracking software didn’t throw up huge flags but it is a possibility.

The other possibility is that these are test bots, posting in an effort to ascertain the limits of Google’s review filter.

What do you think?

1 – Who knew that you could in fact induce a fatal heart arythmia from too much caffeine? Apparently some poor teenager did just that in April after he consumed a Latte, Mountain Dew and an energy drink within 2 hours.

3 – He wanted to remain anonymous but I am more than willing to throw a link out to anyone that provides a lead on a story that I publish.

4- Most of you are familiar with This Land is Your Land. But as children growing up, we never heard that Woody Guthrie was a fierce anti-fascist socialist and we often only heard the first few verses of this song. This one that was frequently left out seems relevant today:

There was a big high wall there that tried to stop me
A sign was painted said: Private Property
But on the back side it didn’t say nothing
This land was made for you and me

5- When my children were little they said “duh” (with dripping sarcasm unbecoming of an 8 year old) so frequently and annoyingly that we “banned” the use of the word in our house by executive fiat. Amazingly my children were of such an age that they actually believed that a word could be banned. That didn’t last long but at least we didn’t have to listen to “duh” every 30 seconds.

It is interesting the use of reviews from TripAdvisor. It almost seems to be a sad marketing trick to use old existing reviews again. I see that the are posting the reviews for a different location than what was originally posted. I see that several TripAdvisor reviewers post all of their reviews on the same day too. Nothing fake going on here and Google 8 filters agree.

That is a helluva a lot of coffee!!

Looking at the Google map and all the Starbucks reviews he posted he must have a really cool BOT or APP to help generate the text and then post on all those locations.

I would like to see his IP address to determine his footprint.

Well, if he didn’t die from a caffeine overdose, it could have been clogged arteries. SPAM hall of fame well deserved!

My guess is that Starbucks and Chic-fil-a hired a digital agency to improve/increase a key metric. Agency agrees to achieve key metric while leaving the review spam details out of the statement of work.

Or a competitor Starbucks/Chic-fil-a did so to sabotage the brand via stories like this and/or a Google penalty.

Review penalty for tampering has not happened by Google as of today. I believe it is necessary and coming. I suggest that we call the Google Penalty for spamming reviews “lama”.

I agree. Wonder if it auto grabs the TA reviews as well?

@Scott
Thanks. You are welcome to use the phrase and or graphic any time!

I thought the same thing but I couldn’t fit it into my (fake) narrative. 🙂

And the all 5 stars reviews, without any critical examination, end up helping Starbucks and Chick-Fil-A.

Olive Garden, Starbucks, Chic-Filet are complicit.
This might be precedence to develop a disavow tool for reviews.

@David
ooh…. you think so? Wouldn’t it seem like to much risk if exposed by the FTC? “Starbucks fined for buying reviews” kind of thing?

Given this is multi-state issue; the FTC would make that look like small beans.

I have spent the day grumbling about locations stuffed into Names in map listings for a whole raft of industries. Where so very few of us seem to be playing by the rules… reading more examples of cheating certainly makes me want to spew 🙁 Great call by Mrs B!

@Jo
Yes, I think so…. but Google is moving ever closer to “Real World S*&t” in their assessment and these cheats will hopefully become less important. Here’s hoping anyways.

Yes it was a great call by my wife… but don’t let her hear you calling her Mrs. B, she’ll have my and possibly your head. Its Mrs. G. 🙂

…after downing my tasty six hundred and eighty-fourth cup of Starbucks coffee this week, I’d like to relate that I’m shaking so much I can barely hold onto my delicious Chic-Filet sandwich. On the way to meet my buds Jack and Joe, so we can partake in another all-we-can-eat salad and breadsticks brunch at my favourite Olive Garden: life is grand.

I took a look at the profile and the number is down to 45 Contributions so either the attention from everyone is working or Google is cleaning up its act? What do you think which is it?

@David
Why should ANY reviews remain? Why should the profile remain?