Confederate Memorial Day is celebrated as a public holiday in Alabama, Florida, Mississippi, South Carolina and Texas. Although in Texas it seems to be referred to as Confederate Heroes Day and is celebrated on January 19th. Apparently there though it is considered an optional state holiday  “meaning some state employees will come to work while others do not”.

Obviously it is a day with deep and to many, abhorrent symbols of our history. And many would contend unnecessary and hurtful as we  already have a Memorial Day to remember all fallen soldiers.

And Google seems to be in the middle of it. Read this post in their forum:

Hi, it seems that every business in Texas, including ours, has a “Confederate Memorial Day” holiday within their hours listed on Google. Our business absolutely does not want to be associated with this “holiday.” Can Google please address this? 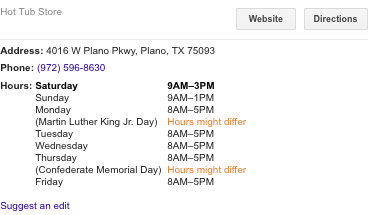 As reader Tom Waddington points out below, in those states that have a state holiday for Robert E Lee’s Birthday, that state event trumps the federal holiday of Martin Luther King Day. 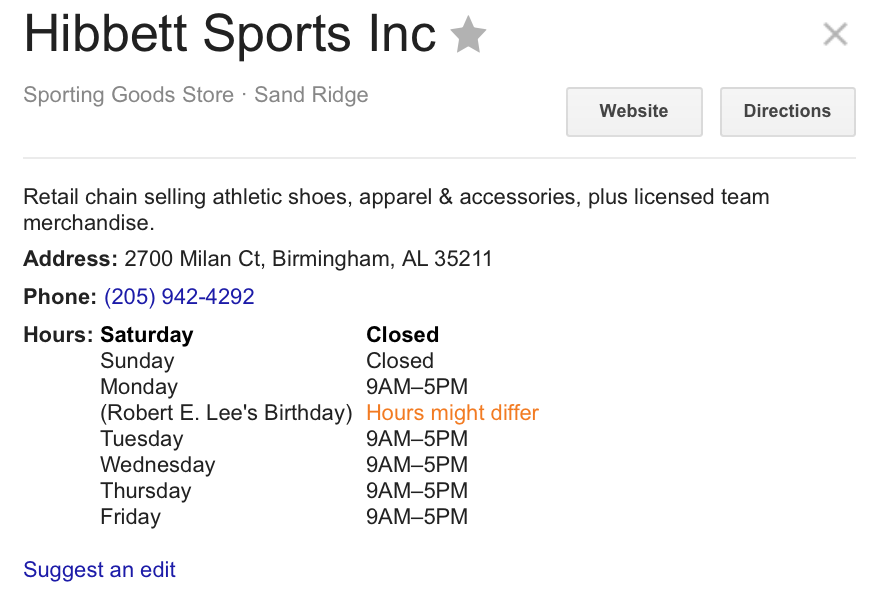 Although it appears that bulk uploads from national accounts have some control over the labeling of the holiday. 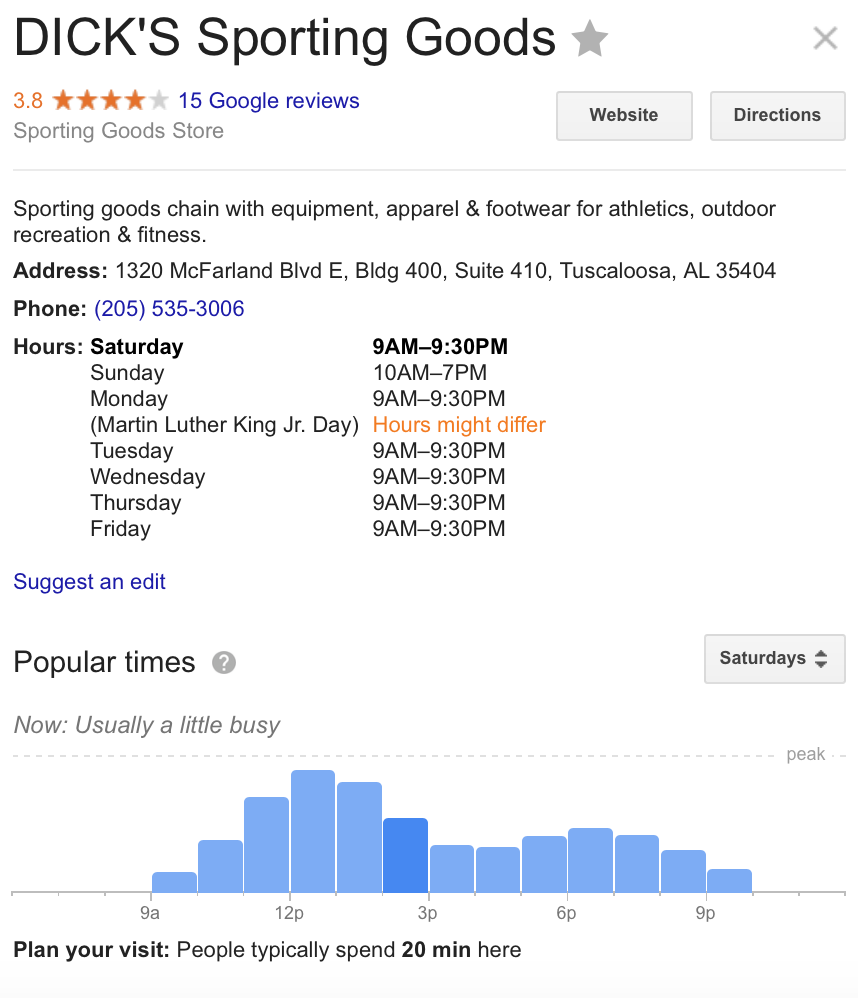 And this example being discussed in the Google Search Community (h/t to Thomas P below): 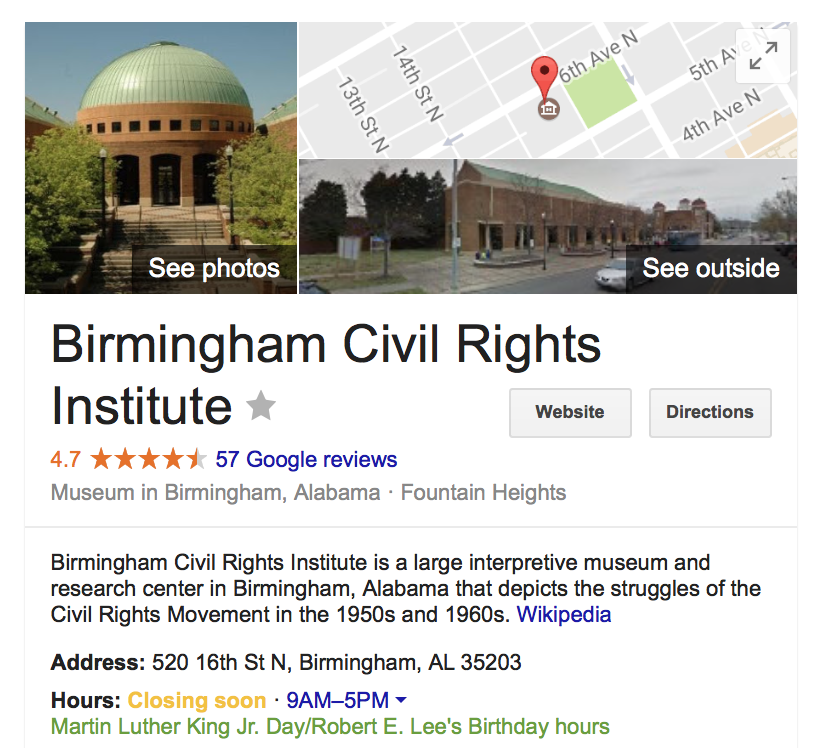 They have not updated Texas’s Thursday holiday: Confederates Hero’s Day. They retain the mislabeling indicating that it is called Confederate Memorial Day. Google knows the actual name as indicated in this answer box:

And clearly even agencies are open that day so it is not clear why there is any notation needed at all. 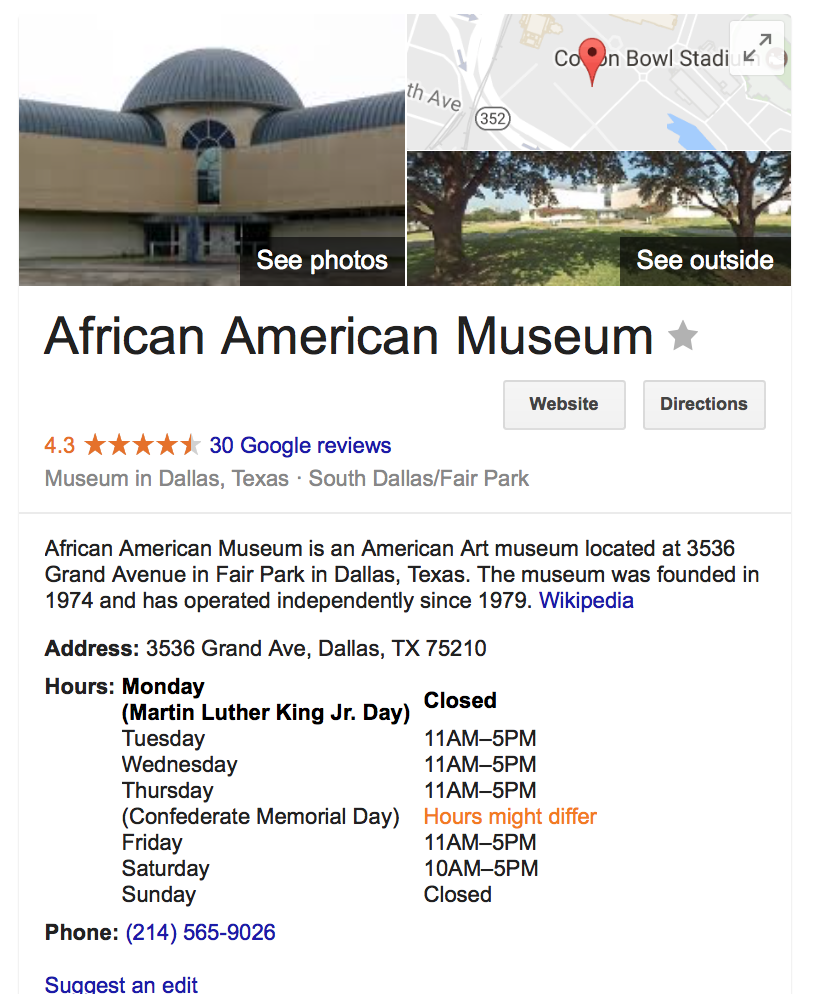 Last year the Dallas News ran an editorial: Confederate Heroes Day has no place on the state’s official calendar where they noted: I’m sure some members of the Confederate army behaved heroically in defense of their fellow fighters and their ideals. That should not make them heroes in the eyes of any government entity.

Also, for Monday, Google is showing the state holiday over the federal for listings in Alabama, Mississippi, and Arkansas. So “Robert E. Lee’s Birthday” appears instead of “Martin Luther King Jr. Day” for the ‘hours might differ’ notice.

I absolutely object to Robert E. Lee birthday supplanting MLK birthday on recent Google searches for restaurants opened tomorrow in our area. I initially interpreted as a preference of the restaurant, a prejudiced one I might add and it made me consider not patronizing them until I realized it wasn’t the restaurant’s choice at all. A school librarian, we never even mention Lee. I live in Alabama.

@Marie
It’s very sloppy on Google’s part. As I noted to Laura they could either show nothing or change it to something like “government holiday” if there are conflicting priorities.

This is infuriating to most of us that run businesses in these states and the national holiday (MLK Jr bday) should be listed over a state acknowledged holiday that most people don’t even know exist like Robert E Lee Day!!
How can Google fix this??? And how can we alert them en-mass it’s unacceptable?

@Tom
Thanks for the heads up

@Laura
From where I sit, on those Monday holidays where businesses are usually open regular hours (MLK Day, President’s Day, Columbus Day) Google should NOT even be putting this notice on the hours for every business.

It might make some sense to put them on Banks and Government offices but expecting every business that is open to go in and add this date as a normal business hour day is crazy.

It confuses the end user much more than it helps. It creates unfair associations and puts the burden on the business to have them go into the dashboard and do the work that Google was too careless to do correctly.

As to which holiday’s Google picks to show it is bizarre that they would pick Robert E Lee day over Martin Luther King Day…. if they are in doubt they could say: government holiday or some such.

I would suggest that you head over to the forum and let your thoughts be known.

As soon as everyone realizes that everything “Confederate” does not equate to racism, we will be a long way towards healing rifts between everyone.

@Bruce
Maybe. Not sure I agree but I can at least recognize the validity of the argument in a broad sense.

There is also a difference though between remembering these soldiers and making heroes out of them as Texas does. The holiday is named Confederate Heroes day.

The other problem I have it is all too often this sort of naming and highlighting is really a dog whistle.

Regardless its sloppy work on Google’s part that as far as i can see confuses viewers and businesses. See my other comments as to alternative tactics they could have taken.

‘Although it appears that bulk uploads from national accounts have some control over the labeling of the holiday.’

This is not the case. Bulk upload has no correlation with changing the holiday hour annotation in the knowledge panel. We test uploaded special hours values as well and that did not change the holiday annotation either. This definitely seems like state specific logic on Google’s end.

@Edgar
Thanks for the clarification. Wonder how Dicks example above got the treatment it did?

Your guess is as good as mine seeing as how ‘AL’ should display Robert E Lee per the Holidays on Google list: https://support.google.com/business/answer/6333474#us

Nonetheless, a potential hack that does provide a workaround is simply omitting regular hours for every single day of the week. This remove hours of operation completely from the knowledge panel and as a result not display the holiday annotation.

@edgar wouldn’t a better work around be to enter special hours for the day?

A really hilarious effect, can be observed when doing a Google WebSearch for [Rosa Parks Museum] (Museum is in Montgomery, Alabama) – Screenshot of SERP: http://i.imgur.com/5PYIMwx.png
(found via https://productforums.google.com/d/topic/websearch/qHjmuWft7QQ/discussion )

@Thomas
That’s a good one.

Fascinating, Mike. When you couple this with the edits of the GMB listings that continue to crop up surrounding issues of protest and suffering (Trump Tower, the Mexican government, the police station at Standing Rock), Google’s predicament is pretty serious.

They want to represent the world in a real way, and when real people have strong feelings about holidays, government offices and businesses, that is coming through in a way that is – if nothing else -real. Maps as social battleground is poignant.