The Houston lawyer who decided that he needed to show a reviewer that they “need to learn the consequences of their actions,”  for a bad review must not have gotten the message that suing customers over online reviews is a terrible idea. 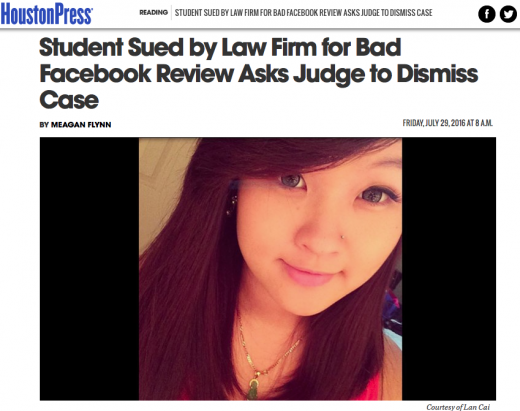 The act is usually dumb* and the consequences almost always counter to the interests of the business doing the suing. That certainly seems to be the case here where the law firm’s actions are being splattered over the local Houston news and he has been hit with a veritable torrent of bad reviews and comments.  It will get worse if he loses the case.

The claims the lawyer is making are weak and his behaviors left a lot to be desired. He may have thought he could win this in a court of law or won by intimidation but he certainly won’t win this in the court of public reviews or public opinion. And if (more like when) he loses the legal case, the public perception of his legal capabilities, to say nothing of his integrity, will be questioned. I can’t think of worse outcome to befall a business.

Yelp may be disingenuous in their defense of free speech in highlighting businesses that sue customers over bad reviews but their highlighting of the behavior certainly serves Yelp’s interest and has its merits . Although in this case Yelp will have to wait for their Active Clean Up alert to be removed before they can add the Questionable Legal Threat alert.  It is but one more reason why a business should be sure that there is no other avenue before pursuing a legal case and that the gains will far outweigh the losses.

The legal system is stacked against a review suit, the costs are high and the barriers are real.  But I would never say never sue over a review. I think there are times when a competitor or an ex- employee or ex-spouse is behind it and the damage so great that the perfidy needs to be exposed publicly. But those situations are rare, even in the wacky world of reviews, and targeting a customer always appears to be an act of desperation.

This lawyer is going to get his reputational clock cleaned both socially and legally. And he inadvertently makes a great case why it’s almost never rational to sue over a bad review. At this point the lawyer should probably withdraw his suit before he is further embarrassed. 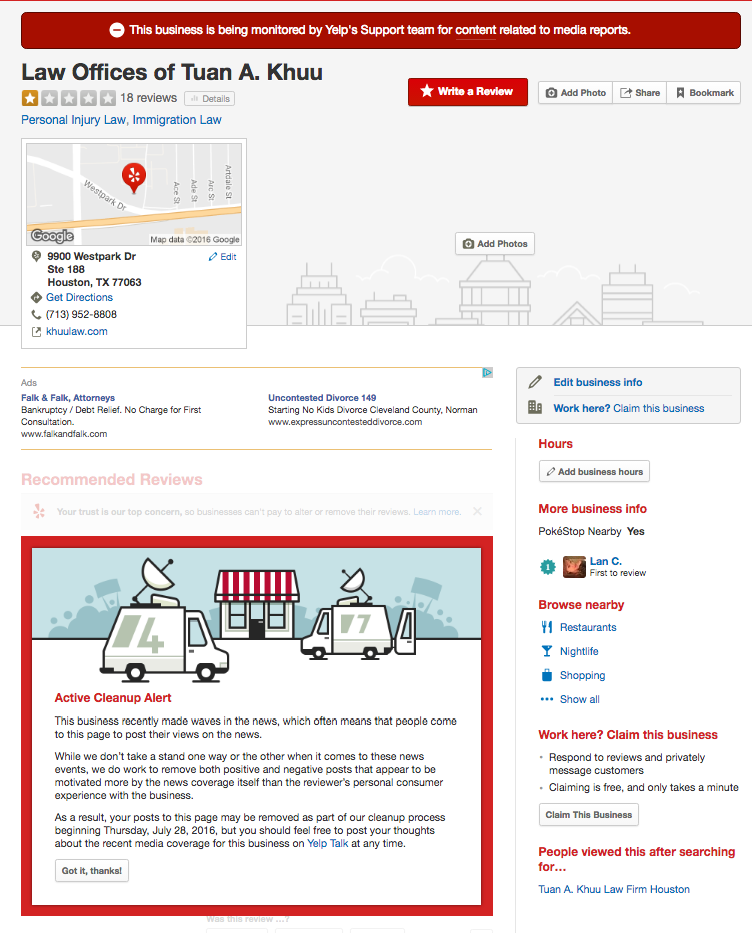 *Notice I didn’t say the attorney was dumb, I wouldn’t want to be sued. That is yet to be determined. 🙂

We have similarly written about the foolishness of suing your customers for bad reviews. I agree with everything in your article. I’d even go farther on the “never sue” argument – you mention ex-spouse or competitor as a possible reasonable reason to in fact sue, but they aren’t customers. In terms of legitimate customers, there is no reason to sue as a first resort, ever. Think about other alternatives before you sue. And I might even consider that advice for a competitor, but I too can see reasons why legal action may be required.

As I said the act [of suing a customer] is usually dumb and the consequences almost always counter to the interests of the business doing the suing.

It certainly would be the rare case, never a first line of action, always an action of last resort, but I could, in theory at least, conceive of a situation where it MIGHT make sense.

I think we are in agreement here.

I also agree that it’s usually a bad idea for a business owner to sue over a bad review, but there are some times when it might succeed.

The Houston Press article implies that the reviewed lawyer has to prove damages. However, if a statement is judged to be defamation per se, damages need not be proven. From Wikipedia:

Statements are defamatory per se where they falsely impute to the plaintiff one or more of the following things:[2]

So could the review statements injure the plaintiff lawyer in his profession? Probably yes. If so, there are statutory damages and there’s no need to prove actual damages.

If you read the actual review, the defendant makes statements of fact, not opinion. Generally defamatory statements are factual — not opinions. Facts can be proven true or false and opinions are personal. So a safer review for the reviewer would have talked about losing confidence in the lawyer after a short period of representation or not feeling safe in the lawyer’s presence.

Also, the lawyer might be getting lots of bad attention in social media and in the Houston Vietnamese community, but I haven’t seen any Houston television coverage of this. I live in the Houston suburbs. The Houston Press is known for publishing sensational stories and doesn’t have the gravitas of the Houston Chronicle.

1- I would be curious to know how much of his business is Vietnamese driven. I would assume a lot.

2- It’s useful knowing that the case has not yet reach full blown Houston newsworthy state but it still can depending on the legal outcome.

3- I am not qualified to argue the legal issues in the case but regardless this lawyer will have a price to pay that isn’t clearly worth whatever gain he thinks he might get.

Thanks for adding nuance to the conversation!

The truth is an affirmative defense to a defamation claim. You can’t be sued for defamation if everything you’ve said is true, regardless of alleged damage done to said individual.

correction… can’t be convicted. Anyone can be sued.

What you say is true, but it’s small comfort to the defendant here. With most torts, the defendant wins if the plaintiff can’t prove his or her case by a preponderance of the evidence.

Let me also add that the law of defamation varies by state and country. The information provided by me is not intended as legal advice, but is only intended to provide a general understanding of the law. Readers with legal problems, including those with questions addressed by my comments, should consult local attorneys for advice relevant to their particular circumstances and local laws.

You don’t need to tell me that. I’ve been to law school.

And that doesn’t make this frivolous law suit any better on the lawyer’s part — This is a case that should be thrown out in summary judgment against the plaintiff.

I’m sure you understand that Mike has readers from all over the United States and many other countries. The disclaimer was intended to remind them to check with attorneys familiar with their local laws, for advice relevant to their circumstances.

I’m a lawyer, and I’ve been an active member of the Virginia State Bar for more than 17 years.