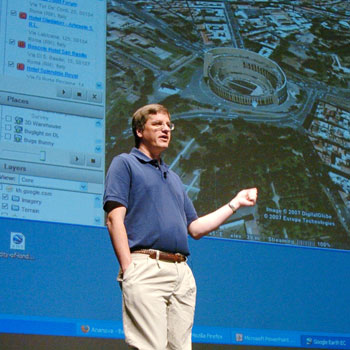 Re/code has just reported that Uber has hired Brian McClendon, the former co-head of Google Maps. McClendon has a storied history in the mapping world having created Keyhole and Google Earth and having marshalled many of the technical developments at Google Maps over the past 10 years. According to Wikipedia he holds 12 Map patents including 7 related to KML.

Uber isn’t wasting any time building out a significant mapping and self driving car infrastructure. They are obviously very serious about having gutted the Carnegie Mellon research labs by hiring away many of its engineers earlier this year, acquiring long time mapping, driving direction & routing company DeCarta and having made an offer to purchase Here (aka Navteq) from Nokia.

Horace Deidu has pointed out  that creating and operating a mapping company costs $1-$2 billion per year. Because there is obviously little value in licensing of the data there needs to be another model for making money off of the investment. Google does so by selling advertising against the map, Apple by selling devices on which users expect a navigation system. He posits that Uber’s interest reflects a third business model where the large expense of mapping can be supported by transportation services where accurate maps are the key to autonomous vehicles.

Clearly Uber has the resources and they have the chops to make a significant move in Maps. For Apple, Google and now Uber, it appears that a billion or two a year is worth it. But mapping is haaaard…. Particularly at the level of the self driving car and it will not happen overnight. Uber won’t have any easier time of it than it did at Google or Apple.

The implications of the further “privatization” of Maps are not totally clear. Other local search companies and consumers will rely on sole sourced mapping technology that for competitive reasons is kept close to the companies controlling it.

Will our world be a better place for having three companies each dumping $2 billion per year into a Map race, the benefit of which is largely kept for the sole use of the companies acquiring the data?

I’ve not really grasped the advantage of a self driving car (trucks maybe), I LIKE to drive 😉

You’ll buy in when they have self driving motorcycles.

But for Uber, it eliminates labor costs in a transportation & logistic network. In fact California Courts just declared that workers are employees at Uber NOT just contractors so they are very motivated.

@Mike – yes I saw that court ruling as well – who knows… I wouldn’t have a problem being picked up and taken to the airport in a self-driven Uber car. It’s a $60.00 taxi charge from downtown Edmonton to the Airport – perhaps the price may even be lower?

Or the profit higher.

No need to spend on precious human resource and hence higher profit margins is the name of the game here. But how successful and safe these self driven cars are going to be, is yet to be seen.

@Cathy I think I would take my chances with a self driving car. Regardless of my own perception of some ones ability to drive I think a compelling case can be made for general road safety. The work being done with maps to me this is more the beginning to a systemic change in transportation but there is definitely profit motive on Uber’s decision .

As i read this i keep thinking ‘who is going to allow a self driving car on public roads?’ i really hope it happens.
Its kind of scary to read google’s acquisitions…like how they bought boston dynamics and a bunch of other big robotics companies and almost all the big innovators in AI.
I dream of the day we have self driving cars though, and teleporters.

I heard a fellow driver complain that the route uber gave her was crazy wrong one time. She blindly followed it, spent an hour on a 10 minute ride and then got in trouble for doing so. Maybe they hired him to keep that from happening.