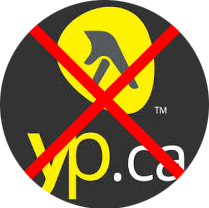 It has been confirmed that YellowPages.ca  (YP.ca) is no longer Google’s primary data supplier for business listings in Canada. But the story appears to be bigger than that and likely includes new terms in many countries whereby Google is now owning rather than licensing their business listing data.

Google has, over the past year an half, apparently renegotiated a number of their worldwide business listing licenses with their primary data suppliers. This has lead to new deals and, in a number of cases, changes as to who provides Google with data.

Late last week, I noticed that YP.ca, long a Google data listing partner in Canada, was no longer listed within Google Maps as providing business listings to Google. A link to the YP site had been visibly listed at the bottom of every page of Canadian results within Google Maps. I also noticed that they were not listed in Google’s Legal Notices Page for Business Listings Data. My inquiries confirmed that they were no longer providing listing data to Google.

Those knowledgeable about the situation said that beginning in fall of 2013 Google started to renegotiate licensing deals in many countries, worldwide. Google was modifying the arrangements so that they purchased the listings outright as opposed to the annual licensing deals that had been previously set up. They wanted to pay a fee for each listing and then pay only for the delta in listings that occurred with updates. Google would then own the listings and the data would be unencumbered & show without any need for attribution.

In examining the list of licensees my source noted that some country partners are gone from the list that were known to previously have licensed their data to Google. In some cases the same companies are still providing Google with data but under the new terms and without attribution. In other cases Google is sourcing the data from new companies. According to my source, apparently some that are still shown as licensing have switched to the new purchase agreement but the plan has not yet been implemented.

When comparing Google’s legal notices for business listing data both currently and historically (via the Internet Archive) the change seems to have started showing in November 2013 when Google moved the notices to a new page. At that time, Google added a significant number of new licensees but there was one obvious deletion: InfoUSA and Acxiom. I have prepared a Comparison of Business Listing Data Partners from Google’s website in Excel so that you can see the changes over time.

While I do think that InfoUSA is still providing data to Google it is likely under the new terms. I have no clue one way or the other for Acxiom.

This reported timeline is consistent with the last year’s email alerts alerting businesses in Australia and Canada with GMB claimed listings that if they didn’t “review and confirm the information in your Google Places account, we will no longer be able to keep and show it to Google users”. At the time I speculated that this had to do with with local licensing issues. That now appears to be the case. Either Google was trying to update as many listings as possible to minimize their costs under the new arrangement or proving to existing partners that they had a right to retain the listing in their database.

I would further speculate, based on what is known, that Google actually implemented the new data arrangement in the US, Canada and Australia first but has delayed implementation in other countries where the new agreement is in affect.

In the case of Canada, we do not yet know who replaced Yellowpags.ca. If you have any insight into that please let me know.

These changes reflect both Google’s power in the local marketplace as well their desire to not be encumbered by licensing agreements. That is likely as much about their freedom to use the data as they see fit as it is about costs. With the move towards wearables, in car and in home presence Google, with ownership rights, would not be constrained where, when and how they displayed local data.

Here is the Tl;dr in bullet form:

Here is what is known:

1- Yellowpages.ca is no longer a primary data supplier for Google
2- Starting in fall of 2013 Google renegotiated their terms to one of purchasing the data instead of licensing the data. Some of their partners did not agree to those terms and left the program.
3- For some of those partners in non-English speaking area, they agreed to the new terms but the program has not yet been implemented and they still show as licensees.
4- In November 2013 timeframe Google released an updated licensee list.
5- Many new companies in many new countries showed up at that time.
6- One obvious one missing – the US. InfoUSA and Acxiom no longer showed up as licensees.
7- Shortly after the Feb email that Google sent I noticed (Mar 2014) that some searches did NOT show the Yellowpage.ca link (car dealers in Toronto) but many did (plumbers in Edmonton).

1- That the links to YP disappeared over the last year and that YP did not agree to the new terms.
2- That either InfoUSA and/or Acxiom did agree to them.
3- That those emails in Australia and Canada were to get the listings in order for this transition.
4- That the transition, while contractually in place, has not taken place outside of those 3 English speaking countries yet.

What we don’t know and would be good to know:

1- Who replaced Yellowpages.ca
2- Which companies in Australia and the US are now providing primary data

Thanks for the post. We noticed this weeks ago when many of our clients lost all info on their Google Plus pages, including all of their hard earned Google reviews. We believe the loss of data was as a result of the changes going on with the YP.ca/Google updates.

Very insightful, in depth behind the scenes reporting, Mike. Thanks.

Potentially large impacts in many different ways across many continents and different nations. Potential impacts here of many types.

At the end of 2012 and more specifically in 2013 when CitySearch fired 2/3 of its staff including many of its tech people I started to speculate about the “importance” and “value” of some data sources. I thought it particularly important in that at an earlier time period, as you had noted it appeared that City Grid’s (a subsidiary of City Search) data was moving into the Google local data stream faster than many other data sources.

Once they fired the bulk of their tech staff their ability to process new data became morbid if not defunct. I speculated about the value of data sources that couldn’t operate sufficiently to provide accurate data.

This change, as you note and speculate is of a different nature; possibly contractural. Google wants to own the data, not access it through a licencing agreement. Google is capable of highlighting and verifying data on its own now at a far better level than before through mapmaker and GMB.

VEry very interesting and potentially suggesting new changes in the world of local.

much to be learned. Thanks for the update and tracking this situation.

If you are a YP co and you sell your listings data to Google, hopefully you get the pole position to resell Google services at a decent rate. But if data is your only point of leverage, sooner or later, Google will decide it can get by with “good enough” data that will get enhanced over time by G.

Aint that the truth Andrew!!!!

I checked with InfoGroup and Acxiom and they’re still distributing to Google. They’re listed here: http://www.google.com/help/legalnotices_maps.html in section 5.2.

In local search, pages from YP were often very high in search results. These pages were often of very low value and I always thought that YP was getting a preferred treatment because of its status as a data provider. If that is no longer the case, I hope the YP pages will disappear from search results.

@Marc
has there been any drop in their rankings?

This was bound to happen, a natural progression of sorts. Since how long they would continue to get and display data under license and every time attributing a link to yellow pages? I think they should go for subcontractor kind of relationship with new service providers, pay them and own the data.