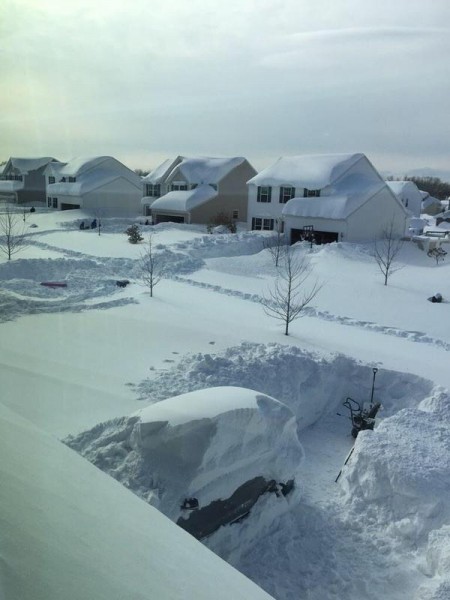 As many of you know I live in upstate NY about 70 miles due south of Buffalo. You may not know that I am flying home today from Denver after speaking at the Hospitality Marketing Conference.

You also know that there has been a boatload of snow in Buffalo and that people have died. And that the storms are continuing. You may not know that most snow fall throughout all of Western New York is caused by the lake affect of the cold westerlies passing over Lake Erie, picking up moisture and then dropping snow in very narrow west-east bands. These bands are often only a mile or two wide north to south so if you get through it is often clear on the other side.

You probably know that a number of roads have closed in the Buffalo area and that includes the major north south routes that parallel the lake that I take to get home, routes 400 and 219. You probably don’t know that the airport is open and only got a few inches of snow and that where I live in Allegany, NY 70 miles south of Buffalo is about 10 miles outside of the snow belt and also has very little snow.

As I was getting ready to start my day, I was wondering if there was a route home from the airport that somehow avoided the many road closures and perhaps navigated to the east of most of the snowfall. I checked both Apple Maps and Google Maps and got two very different but interesting answers.

You also probably know that I would rather spend the night in my own bed rather than in Buffalo tonight. Or maybe not. It will be interesting to see “ground truth” when I land this evening.

Accurate driving directions obviously can be a matter of life or death. Heading off into a serious winter storm can be dangerous but sometimes it makes sense. Google says no go, but Apple could very well be correct in this situation.

I am not sure if I will test the directions to find out. Although if you live or work near the Buffalo Airport I would love to hear from you.

Update: After battling Waze with its overly invasive privacy settings, it surprisingly confirmed Apple’s routing. Curious that Waze, which is owned by Google and often supplies data to Google Maps, is not used in this situation.

Interesting post – although do note your Google Maps appears to be set to ‘public transport’ at the time of the screenshot, hence the no routes found.

Did you try selecting the car icon too?

@Andrew
Good catch! Thanks. I corrected and it shows the same.

Definitely install the Waze app, as it will have live, crowdsourced data from people who are on those roads right now.

Tom
I tried to reinstall Waze but it wanted to know SO much personal data and contact info that I became discouraged.

Hi Mike, I’m currently stuck in a hotel close to the Buffalo airport after my planes yesterday and today we’re both cancelled. I won’t be leaving until the weather clears hopefully tomorrow. The road closures are serious around here with troopers blocking access to the major highways. I’d be surprised if any app could be on top of the minute by minute decisions made law enforcement.

I wish you safe travels and further that you’re able to make it home!

@Chris
Thanks for the local update. Things certainly are unpredictable.

I’d go to the local news sites and other local sources for highway information. Good luck.

@Dave
I have done that but the sites don’t mention which roads aren’t closed so it is difficult to know from those…. obviously I need to wind my way around to get by these belts so its tricky navigating on roads that I am not familiar with.

Were you able to make it home okay?

I stayed the night in Buffalo and am heading south just now to see if I can wind my way home. You?

Mike, I hope you made it home safely today. I was wondering the other day if people traveling west the other day checked any of the maps to find another rout before they got stranded on the NYS Thruway. I’m up here on Lake Ontario halfway between Rochester and Oswego. Just a dusting but bitter cold. The creek froze and our guest fishermen could not fish.

From your post on G+, looks like you made it home, so glad! It was great having you at HMS and getting to hang out a little bit!

Yes, I did make it home just fine….. and most of Western NY has now recovered, they are just waiting to see what happens on the flooding front.

Mike,
Glad you made it home safe! I’m grew up in Silver Creek, NY which also got hit really hard by this storm. Some of my family members posted before and after pics of the storm on Facebook. It’s incredible, as fast as it came, it’s already gone. Not a drop of snow in downtown Buffalo!

In regards to the map, Google and Apple maps should definitely have a reliable data source for road closings, storm warnings, and driving bans (if they don’t already). In a situation like this, people are literally putting their lives in the hands of technology.