Finding duplicates for the same listing with the Google local index is critical. Unfortunately the new Maps is terrible at it and G+ creates too many false positives. You can revert to the old Maps and its increasingly quirky behavior or MapMaker to find the duplicates in the Google Local index but both of those are slow and somewhat clunky. Michael Cottam has recently released a lightweight duplicate Google Page finder tool to do just that.

He developed it for a large medical clinic that that had a huge mess on its hands between the clinic’s, Google’s and the practitioner’s handiwork. It uses the Google Places API and the “Geocode API to get a lat/long from a postal code, to narrow down the results from the Places API text search to a 10km radius around the zip”.

It works on both business name and phone number even though the interface indicates just business name. Is fast, simple and does one thing well. Give it a try. 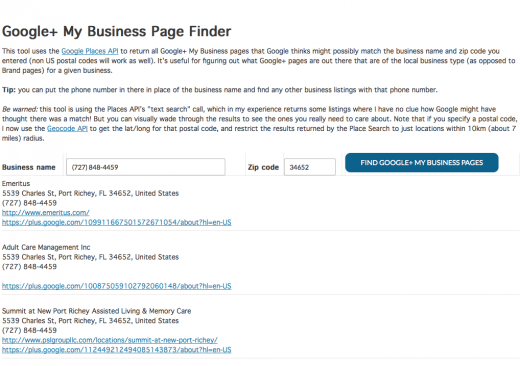 Thanks Mike I tried it yesterday with business name and it pulled too many totally unrelated results. Then I did the same name/zip search on Map Maker and got the same results, so I guess it’s pulling the same info you’d find on MM.

Didn’t know you could do search by phone instead. That’s good to know.

It’s an interesting tool, while it does pull ‘related results’, it’s still helpful – it works in Canada too 🙂 thanks for sharing it Michael and Mike.

@Linda
The phone number is useful. You are correct about it finding too many on the name search. The big value is its speed.

Thanks for sharing this, Mike!

I’m currently using the text search API call to get results, and it takes the text I pass in (the name field and the postal code) and treats that a lot like a Maps search, i.e. it’s expecting to see “thai restaurants” as much as it is business names. So they’re matching against the description etc. as well.

I could use the Nearby search API entry instead, since it allows you to pass a separate name field. I think what I might do is give the page two options so you could try one or the other. The reason I used the other option is that I was running into situations where the business had different names, e.g. Dr. Smith, Dr. Jones, and the XYZ Clinic might all be out there, and by passing in the business name to the text search, I’m generally finding all of those (as the clinic name will generally be in the description for the Dr.’s listings too).

Thank a ton Michael Cottam, infact it helped me found my business listing in numbers of which I was not aware, I need to delete many to keep one.

Awesome tool thanks for sharing such valuable information.

Good point raised, thank you. Going to use this tool to check my listing(s)

Great stuff. Is there any source code Michael could share so I could make on for Canada?
Thanks

Have already used this a few times this week with success. Thanks, Mike! Thanks…other Mike!

Great tool, thanks for sharing! Working in Poland 🙂

But what about Google+ Pages? It will be great to handle at the same time Google+ Local Business and Google+ Pages duplicates.

I haven’t been able to use this tool since the end of October – what happened to it? Anybody knows how to reach out to Michael?

Hi Martin, when it first launched, it went over the allowed # of API calls per day pretty quickly. But I’ve got that limit extended so it shouldn’t be happening any more. I’ve been using it several times per week since then. Contact me via email if you’re still having issues. me@michaelcottam.com.