Local Heat Maps – Lots of Attention, Not So Much Clicking

Mediative has published results of their recent eye-tracking and click through research performed last spring that included local pack and carousel results:  The Evolution of Google Search Results Pages and Their Effects on User Behaviour”. They discuss the local implications in a blog post today.

While the study has some methodological issues the results are interesting and worth exploring.

Local Listing Below the Pack: 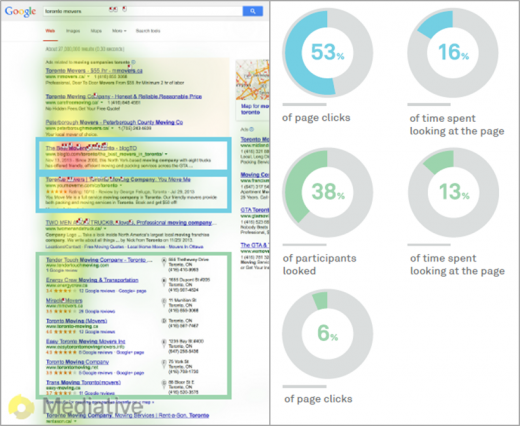 Listings Above the Pack: 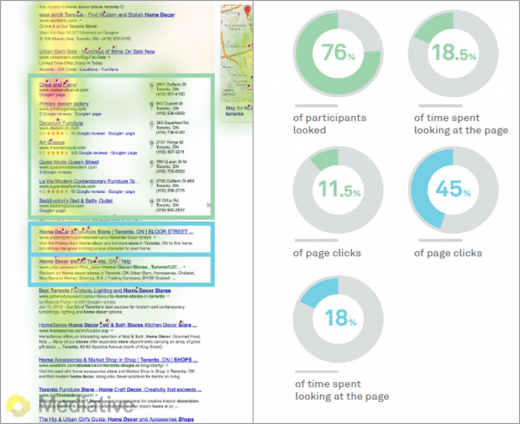 Power of Organic: While most users clicked on the organic results, it is not clear whether that was the brand affect of having major brands there or the placement. Most likely both. In previous limited research that I have done people often scan the page and frequently will stop on a well known site that they know does a good job curating, like Yelp or Tripadvisor.  Regardless, if you are blocked out of the pack due to Pigeon, there are still clearly organic opportunities.

Visual Distractors: Even though Google has removed many visual distractors from the results those that remain are highly attractive to users. Thus rich snippet reviews for example, even if lower on the page, can attract views.

Chunking. One of the things that Ian Everdell of Mediative pointed out was the existence of visual chunking. People look at the top results in any subset of results. They effectively create visual groupings of results of which they do a quick scan and look for relevancy in the given sub group. In any of these groupings (ie Local or organic or ads), the top two results get the most attention. Thus being 1or 2 in the Pack is significantly more valuable than lower.

Limits of the research. While the eye-tracking sample size is more than adequate to give an idea of where searchers were looking that is not the case with the click through study. On many of these results the click through study was based on a sample size of between 50 and 150 clicks. In addition the cohort was not randomized in any way. All were from the Toronto area with no knowledge of income or other behaviors.

The study, in an effort to provide a consistent result to users, was forced to present searchers with a static image and to focus solely on clicks. Thus there is no data on whether or how frequently users cursored over local results to explore the Knowledge Panel.  Nor whether users would have stopped and called some of the local results.

Here are some additional heat and click maps from Mediative: 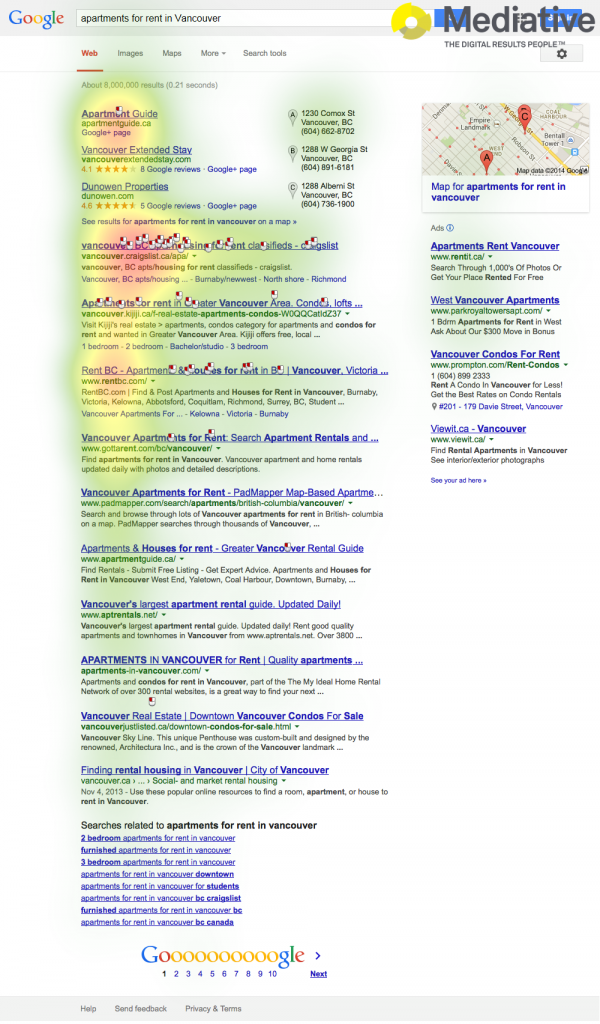 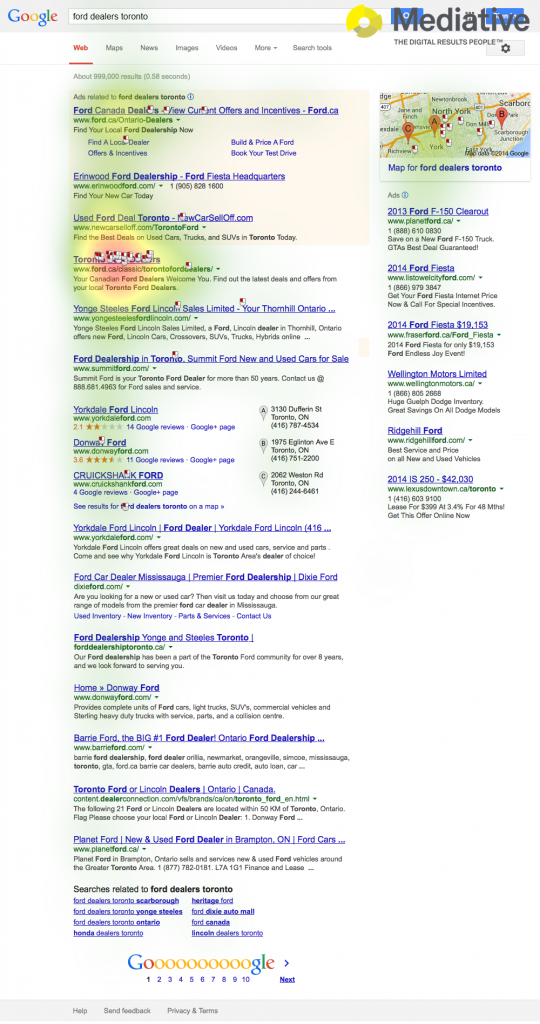 Thanks Mike, this actually (sadly) supports some comments I’ve heard at the Google Business forum.

One user I remember was really irate when he became “A” in the 7 pack instead of #1 in organic. (Back in the days when you could have either not both.)

He said when he was #1 organic he got lots of clicks but when his organic turned into a pack listing his clicks dropped way off. If I remember right the numbers were something like 212 organic clicks the previous month. 12 clicks from the A spot.

He wanted to kill his G+ Local listing so he could get his organic result back.

I think it depends on the type of business and the searcher’s intent. For some the bigger, more contextual organic listing, would deliver better results and get the clicks – especially if it was above the pack. But in some industries I think those map markers and reviews are really the drawing card.

Anyway, thanks for bringing this study to my attention. Off to share with my peeps.

Plus you made the point about phone calls in your post. Phone calls in local are a biggie and I think more consumers pick up the phone and call local businesses instead of clicking. And I’m sure pack listings get more calls. (Of course calls over clicks is somewhat dependent on the industry and where they are in the buy cycle too. )

The study looks interesting, however can we really trust that 53 participants is a statistically significant sample size? Not to mention there is no description about the actual methodology for the study. What were the participants told to do? What was their intent, did they know they were being studied? The answers to these questions can mean all the difference in results.

Gene
As I noted in the article I felt that the eye tracking information is very sound but that the CTR, being based on such a small non randomized sample, was not trust worthy.

In speaking with Mediative, they felt that regardless it mirrored previous research and as such was worth sharing.

So no, it isn’t something you can take to the bank but it offers an interesting glimpse.

I work with a lot of service businesses that really just use their websites as an online business card. All they want is calls. They tend to get more of those when they are in the local results with reviews. I can’t wait until Google fully releases that call tracking we got a glimpse of!!

@Joy
Yes I think that is true in a number of businesses.

Great research, truly. I wonder, though – did they use a portable eye-tracker, or simply heatmap software?

Either way, this is pretty good news for us who care about local search!

@Dorothy
I believe the former but I will double check.

@Dorothy
I checked with Mediative and they use a Tobii T60 desktop eye tracker.

Perplexing information. It ‘seems’ odd to me – it’s almost like they are not interested in clicking on Local results for some reason, unless Organic are way down the page.

and I found this troubling too: —> Listings Above the Pack:
listing A ( 0 review stars) gets 4 clicks
and
listing D (100+ positive reviews) gets 1 click… ack!
(*phone calls I hope)

Cheers, thanks a bunch!

@Dorothy – as Mike mentioned, we used a real live eye tracker. Predictive eye tracking computer models that automatically generate heatmaps have their place, and this was definitely not it.

@Gene – 53 participants is quite large for an eye tracking study, particularly one where the behaviour is relatively consistent from participant to participant (as it is on SERPs). As Mike noted, definitely not a statistically valid sample for click through data, but we felt the data was worth reporting (and is relatively consistent with CTR data reported in other studies, all of which, including our other ones, should really be used mostly directionally because there are so many methodological issues with measuring CTR – see a great new post from Moz here: http://moz.com/blog/google-organic-click-through-rates-in-2014).

In terms of methodology, the participants were aware that we were studying interactions with search results pages. We crafted a number of “stories” (e.g., “Imagine you’re moving from Toronto to Vancouver”) and within each story they had a number of search tasks to complete (e.g., “Find a moving company in Toronto”). They were presented with a Google search box and allowed to type in whatever they wanted, but then were shown a SERP that we had prepared ahead of time (the SERPs were all real SERPs, we just had to use static images to control the exposure for the eye tracking analysis). Once they had clicked, they moved on to the next task – we were only looking at that first exposure to the SERP. The order of the stories was randomized to help control for ordering effects.

@Andy – my guess for that local click result is that Crate and Barrel is a very recognizable brand, whereas The Art Shoppe is not. Also, when we “chunk” the results page into sections, we tend to look at the first 2-4 results of each chunk and use that to evaluate the relevancy of the results to our intent. In this case, Crate and Barrel would have been highly relevant (the task was to find home furnishing stores in Toronto), so the subsequent results would not have received as much attention (and thus not as many clicks, even if those results are deserving of them) – you can see in the heatmap, that the 4th result gets much less visual attention.