Yelp Coming Under Fire For Review Take Downs From Its Reviewers

Yelp is caught in the middle of the shit storm surrounding the hotel that recently was outed for fining wedding parties if they left bad reviews. Thousands of reviews have been posted there and thousands removed. 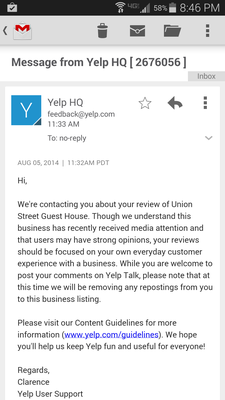 I spent a considerable amount of time researching their claim that it was a joke and posted my findings only to have yelp remove it along with 900+ other reviews. In my post, I provided a timeline from archive.org that clearly laid out when they posted the policy (december 2012) on their site, each (multiple times in 2013) revision to the page that contained the policy as well as the final revision (two edits  yesterday) where they removed the verbiage.It clearly was not a joke and was absolutely intentional. Damn shame I didn’t copy the post as it would have been a helluva lot easier to post again. For shits and giggles, I’ll attach the email I received from yelp.Censorship at its best… Douche’s

Dear Yelp,For removing my review and sending a message I could not reply to I’ve decided to break up with you. I was $500 in hand ready to put our deposit down for our wedding at USH! Why?!?!?I am so over your over-controlling, abusive ways. You never listen to me even when I try to add a post or sometimes help you update restaurant. You are so insensitive to the feelings of others.Also I want you to know I met someone on this website. Urban spoon and I are going to try it out for a while to see how things go. Who knows if  lucky I’ll get a little on google places too?Bye, it was fun while it lasted!

Your policies are outrageous. You should definitely think long and hard if this is how you want to treat your customers as very soon you will have none.

For Yelp to remove the negative reviews shows that the whole idea of reviews is controlled. Good or Bad reviews are subject to removal?

Then why write a review at all?

The removal of so many negative “reviews” – opinions from teh internetz more correctly – calls into question Yelp.com’s ability to actually field reviews good or bad in any fashion at all.  Surely the system would reject “reviews” unless the stay date was indicated – oh, I guess not.  Gee, I guess anyone could pad the profile of any business any way they like….hmmm…..No wonder Yelp.com puts so much effort into arguing for their credibility.

Yelp removed my review yesterday, as far as i know, i can post my review free of limitations and express my opinion.I disagree this place for charging $500 dollars if you post a bad review. And I will disagree if Yelp remove my post again.

Reviewers were disagreeing with a hotel policy (that intended to fine (paying guests) for leaving bad reviews when they had no choice in choosing the accommodation.

Not the greatest business decision in the world and clearly this has spectacularly backfired through the media attention.

10000+ reviews on how people who have never been there disagree with a hotel policy is not bringing anything of value to the web.

Way I see it YELP had a point. It could have left the first ten but other than that all these reviews are spam of a different sort.

Even on tripadvisor the guest is expected to have had some interaction with the hotel even so much as ringing for a price before making their review. These reviews would not have passed under TAdv current policy.

Reminds me of a Big Apple Pizza story at some point they had 2900 positive Yelp reviews – http://www.webpronews.com/the-man-who-hugged-obama-has-his-yelp-page-turned-into-a-political-turf-war-2012-09

@J
And Big Earls… not the first time and not the last that the public will use reviews to vent their ideas and ideals. The question for all involved is how do they extract themselves from the maelstrom with the most of their reputation intact.

This situation (and one specific comment above) highlights the incredible vulnerability of Yelp’s entire business model.

1) They are now in a position where they have to please two “customers” and now NO ONE is happy with their review filter.

2) The reviewer who notes above dials this in even further — reviewers think they are Yelp’s customers. Because Yelp has coddled them and wined and dined their elite and encouraged all of this long-form, time-consuming, look-how-clever-my-reviews-are attitude. But Yelp makes exactly $0.00 per review. Their actual customers are business owners. Who have had a negative perception of them for a long time.

They cannot continue to serve two masters and be successful, IMO. In a pure marketplace where they are the middleman, sure, this works. Yelp is not a pure marketplace. And its margins on transactions–should they decide to go that direction–will never equate to their current $600 CPM to SMB advertisers.

@David
They are, as you point, a living, breathing contradiction with endemic conflicts of interest. Their path out is not at all clear.

They should have opened up a feedback form long ago. It’s the timing that’s biting them.

Who doesn’t love to hate Yelp. Being the content middleman can be lucrative: $5b strong market cap.

@David
Are you saying that folks hate Yelp because of their success? I would suggest that the reasons are both more palpable and more real than that.

Time to change things up a bit. Maybe instead of filtering out all of these reviews, they get classed as opinions in a separate, but viewable section of a profile page. Kind of like how the tips section works.

Just a thought at a common ground.

@Blake
Interesting idea. That would also be a way to handle the many not recommended reviews that they bury for merchants

Don’t mean to be off-topic, but has anyone considered TripAdvisor’s policy regarding this hotel? Not a single bad review since this backlash started. So if we are talking about Yelp’s lack of credibility, then LinkedIn is down in the abyss as far as ratings trustworthiness. Or did I miss something and TripAdvisor has always sucked that badly?

@Max Tripadvisor have a policy that a guest must have had something to do with an establishment before they can review it.
Even if that is only ringing them for a price and commenting on the politeness of the receptionist or otherwise.

I suspect they were watching this like a hawk given the publicity and removed any which did meet it’s policy.

Probably got a a few genuine reviews caught up in it as well.

That though is not to suggest that TripAdv sucks anyway as their review filter is easy to circumvent. Members with email addresses is the important figure for them and a key metric for their advertisers. How many actual persons vs email addresses is not something they are that hot on.

“THE OLD BATE AND SWITCH.. We looked a CPO vehicle at this dealership that interested us but we did not have time to make an offer.. the sales man took our information and called us later that day so we made an offer which was rejected. after several days and phone calls from them insisting on us going to the dealership to discuss the price we told them that we were set on our offer and it was senseless to go if we didn’t agree on a price. Finally a woman called telling us that we were only $1k from our offer so we agreed to go to the dealer to discuss and negotiate the $1k difference. We took a half day off from work and drove to the dealer, when we got there, we met the woman who called us and she introduced us to a another salesman, the salesman who we dealt with the first day was not available. WELL, all of a sudden the $1k difference turned into a $3k difference and they wouldn’t take less for this one of a kind jewel ( there are dozen listed in the internet) .. According to the salesman who we met with, the woman who called us did not understand pricing or knew what she was doing to make such an offer, but he would work with us….YEAH RIGHT !… “What kind of payment are you looking for?? we can get you into another similar car.” etc.. We are now looking elsewhere, with the new models a few days away I’m sure we’ll have plenty of jewels to choose from..

PS.
I don’t believe the names of the 3 persons involved matters because when you have so many involved in deception it just tells me that its common practice at this dealership. Shameless, Immoral………
What a way to make a living!!! “

@Blake Denman
Like your thinking. Yelp filter is useless and people that post without having done business at the local (nor even visited the business) are big issues that remain on the page as I’ve seen over and over again.

Not sure what the answer is to citizen journalism (which is not journalism BTW), fake reviews or factless spins but it certainly keeps everyone busy.