A Plug-in for Adding Google Reviews to Your WordPress Blog

Update: I just heard from David Deering about the plug-in’s use of Schema. Firstly the schema is not done correctly. More importantly however (which I suspected but didn’t investigate as I thought the schema was reserved for the paid version… mea culpa) marking up reviews and ratings that were created on another site actually goes against Google’s guidelines for rich snippets (ed note: I am looking for that guideline).  It would be a much better plugin if it didn’t create schema markups, although the data sent through the API could still be considered duplicate/scraped content, since it does end up in the page’s HTML code.  But I don’t think/hope that Google is too strict about that, although they’ve never really come out with something definite on that subject.

Here is the relevant guideline from Google: Be of original content that you and your users have generated and is fully contained on your page.

Many have asked for a way to post their Google reviews on their site. This plug-in seems to solve many of the problems associated with doing that and seems to provide a useful solution.

Google Places Reviews, installed at the right, allows a WordPress site to relatively easily embed up to the 3 most recent Google reviews in a sidebar as a widget or if you purchase the pro version, up to 5 reviews on any page using short codes. With the pro version you can filter by star rating as well. 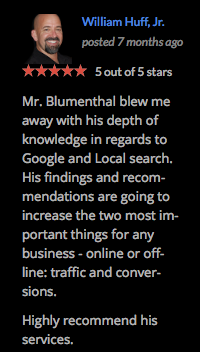 From their WordPress page:

Setup requires that you obtain a Google API Free for up to 1000 uses per day) and configure the widget.  Set up was relatively straight forward and took about 10 minutes once I understood exactly what needed to be done.

My assessment? Since it uses the Google api I assume (but am not positive) that it avoids duplicate content issues. It is free for showing three reviews and only $20 if you want the pro version to allow more reviews and filtering options.

Set up was relatively painless and the free version seems to work well. I find the idea that the pro version would support schema for this use somewhat strange and I doubt that Google would see the content as part of the page but it might. Someone needs to test and let me know.

Update: David pointed out to me that the basic version in fact does use schema both improperly and in violation of Google guidelines. Until that is fixed this is not a plug in that I would recommend.

Here is the screen shot for the widget configuration:

PS OK so who is Jack Swinzer  that seems so fond of me in the reviews to the left?

Ol’ Jack is a sock puppet of a fellow that I managed to royally piss of with my article Need Help Getting Reviews? It’s only $299/mo and a ‘little’ cheating. He called (and called and called) and yelled (and yelled and yelled and yelled) at me about how the article was hurting his reputation. When we couldn’t come to terms after an email (and more emails and more emails) he swore he was going to ruin my reputation. Google removed one but not both of his reviews. Yelp removed both with the help of Andrew Shotland and Phil Rozek. There are some things about Yelp that really do work. And that is one of them that they do better than Google.

darn, I must have missed your blog post about how to implement unethical technics

Awesome find! Just tried it out on a clients website of which the client has been bugging me forever to get them added, simple as can be.

I prefer that it didn’t use schema at all as I really don’t think Google will give them credence anyways. I wonder what’s hiding under advance options and if this feature (that doesn’t work right anyways) can be disabled. Good review and update. Appreciated!

@Scott
I just received an email from the developer and he said that he would implement an on/off switch for schema in the next rev. The pro version does not yet have it.

PS the advanced settings are exposed in the above screen shot.

@Andy
If you look hard for them you can find them. You need to search on Google for “MIKE BLUMENTHAL BLOG SCAM”

IMHO, it is better to use normal text or screenshots of your reviews from G+ & Facebook. Using a plugin, which may slow down the client’s side, which is not using the schema may not be such a great idea. As of today, I do not think businesses are getting reviews at the speed of a twitter feed & thus there is no need of a live updating widget with G+ reviews.

@Jtendra
The plug in allows (actually encourages) you to use their cache (see advanced options above) that can be set for up to three days. That eliminates the need for any real time feed and makes the plug in work very fast.

I think NOT using schema though should be the default setting but unfortunately it is not.

as a side note, we ‘ve used a plugin like this for gathering your own testimonials – http://wordpress.org/plugins/testimonials-widget/ and he did add review schema last summer

side# 2
but Google still leaves that one Jack Swinzer review there ? That’s pretty lame since it’s verifiably bogus ).

How the hell do you set up the API Key for this app. I thought I had it down packed but it is not working smoothly at all. I think this part of the app is the problem for me. I am using it on a wamp server for now and plan on putting this on a page so people can see and possibly create their own comments when this page goes on in a few weeks.