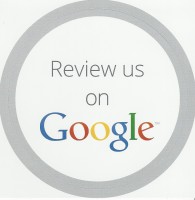 I just received the this Review Us on Google  window sticker enclosed with a very sophisticated and personalized pitch based on the fact that I had a verified Local listing on Google Plus. The sticker was the hook to open the envelope.

Once opened I was presented with a very slick, individualized piece of literature. The flyer showed a localized, personalized Map declaring that blumenthals.com was now on the Map and they embedded our business name front and center.

As you flipped through to page 2, Google pitched the benefits of showing up for a brand search on “Blumenthals.com” and having our hours and phone show as a mobile knowledge panel. (Unfortunately for Google it doesn’t unless I add a geo-modifier… alas).

From there Google pitches the idea that I can get category level exposure and keyword search results with… (a clue: its not SEO)…. Adwords.

Despite the ironies of our company not showing on a branded search, it is an incredibly effective piece. Even if the stickers are somewhat lame Google has managed to leverage their Adwords budget to highlight their free local offering and tie two historically independent areas of Google together into a package that sells both things.

Too see scans of the complete piece:

Interesting. I wonder what the criteria are for receiving one of those postcards.

I also wonder whether they’ll always pitch you on showing up for your Google Places name. It looks like they asked you if you want to be “on the map” for Blumenthals.com – in this case, the name of your Google Places page. Some businesses have such generic and/or spammy names that I foresee trouble in Google’s spray-n’-pray approach to direct-mail

@phil I assume that the marketing department doesn’t know any better.

Wondering if they are sending this to SABs which do not have where to hang it.

@George
We don’t know how broad this campaign is at this point.

I think this is foreshadowing the increase in paid ads within local search. Currently there is only 1-2 ads that show within maps results and they don’t stand out as much as regular SERP results. I anticipate Google giving more visibility to ads within the local search space in the coming years. Perhaps this is a way for them to boost that side of the business.

@Pete
I agree that Google sees this market as a way to grow their ad sales and local ad inventory. The SMB at the location based business is one of their targets for sure.

Mike,
I got the same card yesterday. What I find interesting is that my G+ local listing has categories for “Website Design” and the mailer was customized with verbiage specifically for website development. On your card where it says “Add more details or a call to action” mine reads: “Professional web design. Call now.” As someone who used to work in the publishing industry, it’s impressive to see the amount of data that they had to aggregate to execute such a personalized mailer across probably hundreds, if not thousands (?) of industries.

@doug
Interesting that you in Design and me in hosting got the solicitation. Neither are industries that Google shows the 7-pack for. I wonder where they picked up the additional verbiage on yours from? It is impressive though isn’t it?

@Andy
the core of the issue.

Mike: Interesting article, interesting development. In many ways Google is making an expanded push to try and get more of the local smb spend on the web. They are doing it in many ways.

Their feet on the street sales force of resellers of adwords grew by adding some of the significant directories/ older YP groups that have salesforces.

Wow….that was interesting. At one point these directories were essentially google competitors. Now they are reselling ads. It shows who is boss in the world of the web.

Its further interesting to me that google has significantly increased this feet on the street salesforce through 3rd parties. They won’t or haven’t taken that on directly.

I dont’ see that as being good for smb’s, based on prior experience. Too much money goes to 3rd party middle men and there are built in conflicts of interest between the smbs and the 3rd party sales teams.

One thing I’ve found over time and increasingly more so now…is that both google and bing are increasingly better at highlighting your smb for a branded search. It seems to be pretty automatic.

It should be. Cripes…if a current main stream SE can’t give you…or won’t give you a highlighted visibility for a branded search….than its a failure.

Now I have seen the opposite…where a website representing an smb…was ABSOLUTELY miserable in every way possible in giving signals to the Search Engines for a branded search.

Pitiful. But not the SE’s issue…it was terrible effort by the designer of the site. Interestingly in that one, Bing did a slightly better job of getting better branded results than google.

(different SE’s –different algo’s). Also interestingly the miserable effort by the website designer was counter effected by giving google better data inside MapMaker. That helped give them better (albeit marginally better) results for a branded search. ( a branded search could be your smb name, your smb name with city, town, neighborhood info….etc.)–lot of variations on a “branded search”.

But all of this is pointing to simply sucking out the web ad dollars from smbs. In that regard, Google is also acting by creating ever more barriers, subtle and not so subtle for an smb site to show up for various search phrases.

Google is big..it can be of assistance, it controls search as a giant…but it can also cost big time and harm smb’s big time.

Meanwhile Andy above captured a lot of my perspectives, though far more elegantly and in far fewer words. Nice one
Andy. 😀

@Dave
It is certainly ironic that former competitors are left with selling Google ads. That is amazing isn’t it?

I received mine in the mail as well. I thought this to be very interesting and I have my clients focusing on getting reviews to Google directly. This is a good reminder for their customers to leave them a review.

@Dan
I assume that you are a marketer correct? I am wondering if any clients received these or just web professionals?

We are a small business (<40employees) inWyoming. I recently put our places for business page up. We received this mailing.

@Jason Thanks for the update
@ Bill Thanks!

It appears, from comments here and on G+, that the mailing was sent to a broad cross section of businesses.

Will let you know if any of my clients get this. I suspect 1 or 2 might, but that they’ll throw it away without even mentioning.

The stickers were a waste of money.. They don’t stick….I have opened 2 of them and both of them after peeling them off the paper backing… they have very little stickiness. They fell off the glass entrance door the second time the door was opened.

Received one in the mail yesterday for my wife’s SAB consulting business highlighting our home address. Hmm…

I received one yesterday and was blown away.
I use to work in the printing industry selling variable data printing (VDP). This is how VDP is suppose to be done. Google spent some big bucks on this piece.

If you have any clients or friends that are printers, you will want to show them this.

@Jason
It is impressive, isn’t it?

This is quite the impressive mailer… no wonder they control the entire social media marketing.

I don’t know if we got the mailings or not. I do know I just got off the phone with one of those “adwords consultants”. Now they are very nice, well trained, and responsive.

They tell you their job is to help and to improve results. From our long term experience that isn’t exactly the case. Our needs and google’s needs often work at cross purposes.

They want our advertising money. We want leads that come out of search…which we view as a mega directory.

Frankly we’d prefer them from organic search rather than paid ads. That is where we are at cross purposes. We would like the clicks for minimal cost. Google really wants to deliver them to us at cost…and more cost.

Anyway the consultant and I didn’t have a lot of time to speak today. Here is one thing he conveyed to us.

I’m not convinced that the price goes down, with a higher quality score. But I’m not going to harp on it.

We looked at one campaign. It currently has site links all over. Except they don’t show all the time. The consultant explained that they don’t always show for a number of reasons:
A) the keywords might not match the site links in such a way to show them.
B) the number of ads might be so significant as to limit the availability of putting up site links.

Anyway I looked at our spend on one keyword phrase wherein google had penalized the website. Organically the visibility was DEAD. Its a phrase that doesn’t generate a maps view. Its valuable.

And therein is one of the issues. Our interests and google’s interests don’t always coincide.

But they are big. We are small. they have ALL the control.

I know Google needs organic results or else their search results won’t mean much, yet sometimes it seems the paid ads are getting more and more space on the front page. The big push for local listings must mean they think they’ll make more money from ads with them. Will there be even more ads and fewer organic results then?

We received ours last week. Sales 101 going back to the mailers.

Just a quick note/tip on the topic of these Google stickers:

We have a bulk account with about 900 locations and by asking our bulk rep we were able to get a shipment of these stickers sent to our client. The bulk rep had to coordinate with her supervisor and the Marketing team at Google but after about a month we got confirmation that they’re in the mail.

Hope that helps somebody out there!

@Nathan
Thanks for the tip!

Do you have a sticker I could get that says
(Google it), because that’s my husband’s favorite saying and he needs it to stick on his work truck.