A client, having re-located to a new sub division, contracted with me early last spring to get their new street “on the map” and to clean their NAP. Google, with the help of Dan Austin (a partner on the project) picked up the new streets in about 2 weeks and went live to Maps immediately after. The change of address was equally speedy. OpenStreetMap was about the same.

TeleAtlas, which Apple uses, and Navteq-Here both took almost 6 months to give acknowledgement of the fact that the street reality had changed, another 3 months to get their base maps updated and then with each of their down stream users it was a crap shoot. MapQuest picked up the new streets in January, 2014. Yahoo Maps in February and Apple finally picked up the change this past week. We are talking over a year and nearly a year for Yahoo and Mapquest. Bing, well… we are still waiting for Bing Maps. That’s the Apple (and industry) bad news. Bad but not as bad as Bing and about the same as everyone else. And solely due to their partner TeleAtlas.  Although it does not appear that Nav-Teq-Here is any better.

But here is the Apple good news. Once the base street map was correct, we reported the changed address and had a response and a fix in two days. And not just a response but a direct feedback sent to my iPhone. Nice. It actually felt like the Apple service to which we have grown accustomed and that would distinguish them in the market (Google are you listening?). This is not the first report of Apple upping their listing game.

Now if they can get TeleAtlas to fix stuff as quickly we would be going someplace. Or rather we could get there using Apple Maps. 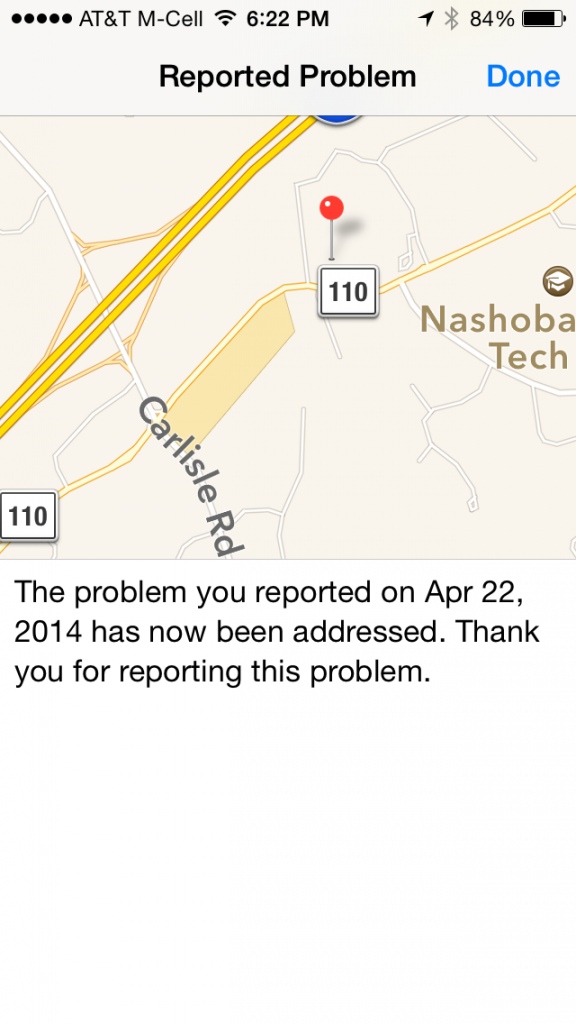 Great example of one of the many things Google gained by making the decision to build their own maps. Things like this, plus expensive and complex licensing terms are reasons why I am a big fan of open source data (like OSM). It’s hard to compete with Google if you can’t get better than this from the map data suppliers. Also like the retro name use with TeleAtlas and Navteq. you know those have changed right? Assume you’re just doing that to piss them off!

I think that the advantage of Google Maps, or rather (Google Map Maker) and OSM, is you can fix the data yourself, rather than waiting for someone else to do it, and the changes go live immediately. It’s something that Google really excels at, which is making their data processes (the ones that happen in the background) fast and productive. Likewise, although I’ve had limited experience working with OSM, the OSM volunteers have made great strides in improving their DIY product, polishing certain rough aspects, but also striving to cover the entire world in comprehensive and good data that is more-or-less pushed immediately to their base map, much like Wikipedia.

I think Google’s constant failure is their lack of attentiveness for bug fixing, their inability to follow through on projects that require long term commitment and allocation of resources, and their abysmal track record when it comes to customer service. Unless you’re paying for it on the enterprise level, you can almost guarantee that Google doesn’t give a crap about you (because you are the data that they’re selling to their “real” customer). Places feeble attempt to break off bits of Google Maps for their business project, and the lack of follow through on using Maps Report a problem, are significant problems that Google could stand to improve on, but likely never will, because, again, they just don’t like dealing with people, and would prefer that the rest of us were androids just like them.

Apple’s expertise at customer service, no matter how indifferent they are to the plight of people who want something slightly “different” than whatever Apple wants them to have, is where they really outshine Google, probably because their customers pay a premium for their products. Getting the Goog to strive to “improve” their customer service so it’s not atrocious is like asking the Borg to tear off their implants in an effort to reclaim their humanity, which is just not something they’re likely to do (not unless you disconnect them from the collective and teach them what it’s like to be human, again).

I refer to the Nokia Mapping product as NavTeq-Here for both historical and current reasons. The current reason is that there is still a map reporting tool known as NAVTEQ Map Reporter even though the product has been renamed Here.

There is another benefit to Google’s Mapping architecture: vertical integration. Once an edit is approved it can be pushed immediately into the forward facing product.

We both know that even when we do get acknowledgment of a fix from TeleAtlas or Navteq it could still be months and months for the edit to show up at Yahoo/Bing/Mapquest.

Whether that is due to the time it takes for TeleAtlas to push out a new build (quarterly) or the time and cost it takes for their clients to take it up or both, it doesn’t really matter. The Maps stay outdated for a much longer period than Google’s.

On top of that, as you have noted to me on numerous occasions, TeleAtlas’s & NavTeq’s tools to fix these problems SUCK.

@Mike: I think Google had a good thing going when all the POIs (points of interest) were present on Map Maker (MM), but when they made the stupid decision to hide SABs (service area businesses with hidden addresses) from MM, they fragmented some of that vertical integration. Dealing with SABs, or even claimed POIs that aren’t SABs, is an exercise in frustration and futility. Yes, it’s still pushed, but you have to constantly jump around from MM to the Dashboard to Support to the forums to Report a problem, and back again, trying to figure out the best approach to get that dang edit published. It’s really clumsy, and with Google having completely given up on Report a problem, it makes it hard to ensure some level of consistency in outcomes.

They way I see it, the Google Geo product teams rarely seem to work together, which is perhaps characteristic of weak leadership, or just the effects of siloing teams that communicate without communicating (Typical imaginary Googler’s day: “I have 1000 emails in my inbox this morning. I’m just going to ignore the first 900 and hope I can catch up on the latest, and declare email bankruptcy on the rest”) but it has the nasty side effect of making it difficult to alter data that should be freely accessible on MM. Woe be to the one who seriously suggests that MM fixes some of those longstanding bugs that make it even harder to add good data via MM, or worse yet, ask the Googlers on the other teams to get their **** together and see how the products mesh together (for hilarity, see the policy fights over categories between MM and Places on the MM forums).

One problem that has diluted the effectiveness of MM (which could be a stellar product, but is in perpetual beta purgatory), is Google’s unwillingness to “let go” and give more trust to long-term mappers. They want to have good data, but they also don’t actually trust anyone to add data to Maps, unlike OSM, which is a free-for-all. (Ostensibly, this is to protect Maps against spam and vandalism, but since Google has as much spam and vandalism regardless of the moderation, this is not a good justification to maintain their present moderation policies.) The moderation processes on MM are completely schizophrenic, with bots approving edits for spammers one week, and human beings denying good edits the next. They can’t seem to decide on what course of action to take, and engineers assigned to MM, who probably never spent more than four minutes of their entire career seriously using MM, don’t seem to understand that it undermines confidence in their tools that acquire FREE DATA from VOLUNTEERS if the tools don’t work the way they’re intended (and you can’t get your edits published).

The sad part is that it’s been like this for years, and isn’t likely to improve soon. The only reason that Google stands out is they aren’t half as lazy as the other mapping services when it comes to pushing tools like MM out to the masses.

However, the one thing that everyone sucks at (including Google) is spam. The laziness in how they approach spam is appalling, because it just siphons billions of dollars out of the “real” economy. One wonders, for example, why Google even bothers with the local spam team if all they do is spend year after year fighting the last battle, and their spam numbers keep going up no matter whatever it is they do. I’m embarrassed at their level of incompetence (they seem to have no shame, so I’m feeling it for them), which in any other sphere of influence, would be grounds for corporate liquidation and reassigning team members to the unemployment lines.

Nonetheless, when the competition is crap, and Google’s tools are “not bad”, then yes, Google is the way to go.