In an effort to assist a client in quantifying the value of reviews and to help them better understand exactly what it would mean to a local business if they had negative or positive reviews, we conducted several large scale consumer surveys of 2500 US adult internet users 25 and older asking them whether they would be likely to choose or not choose a business with negative or positive review corpus. 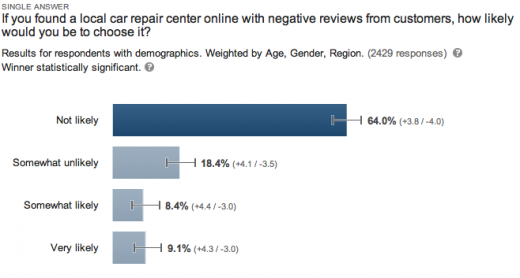 47% and 56% of respondents indicated that would remain somewhat unlikely or not likely to choose a business based on positive reviews. That is a large degree of skepticism. 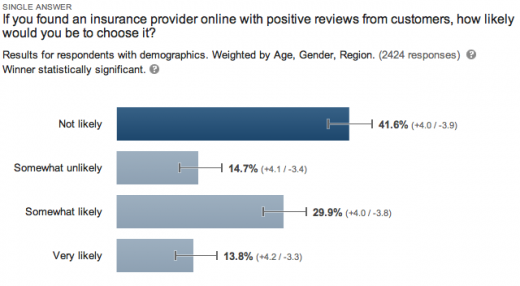 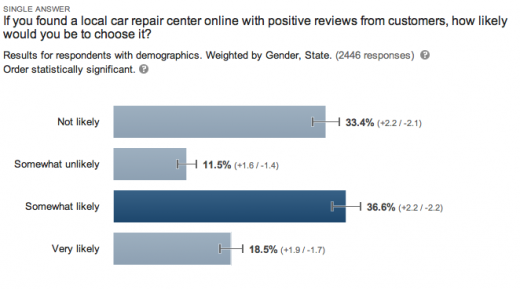 Interestingly there was little regional difference on the attitude towards negative reviews. Whether you were from Minnesota or California bad reviews were the kiss of the death.

However on the positive side, folks from the midwest were much less likely to be impressed by positive reviews and indicated significantly less likelihood to pick a business based on positive reviews. You have to love that healthy skepticism from the hinterlands. 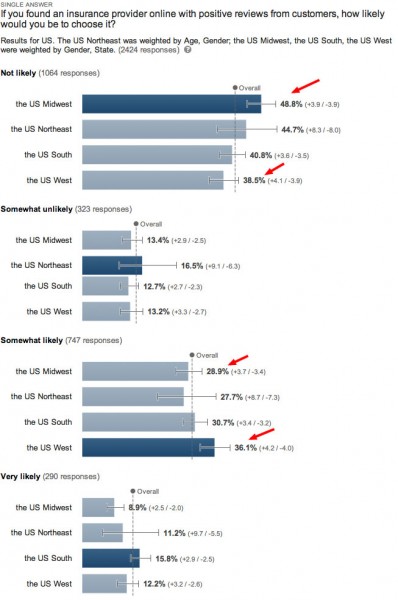 Similarly when you parse the survey data by age, there was unanimity across age groups that there was little desire to look favorably on business with bad reviews. But there was significant age differences in the approach to positive reviews. The older the respondents were, the less likely they were to be impressed by positive reviews and the younger someone was increased the likelihood that they would view positive reviews in a positive light.

Depending on you business and your target demographic you need to be more or less concerned about reviews with older consumers less likely to be influenced by positive reviews. From a tactical viewpoint, these results seem to indicate that any business that is taking reviews seriously needs to implement a consistent and thorough way to minimize the likelihood of bad reviews. This speaks strongly to having a culture that is open to accepting complaints, one that is intent upon improving their processes and  one that is truly concerned about the consistent delivery of quality. Here are some ideas on avoiding bad reviews.

If you are a member of the Local U forum, the complete surveys are available to you in the LocalU Forums here.

Disclaimer: I have developed, with Don Campbell, a feedback and review management product, GetFiveStars.com that reflects a lot of my thinking about reviews including the idea of actively seeking feedback to help minimize bad reviews. Given my commercial interest in reviews, you need to take any advice I might offer vis a vis reviews with a grain of salt. 🙂

As you suggest people’s understanding of what are negative and positive reviews needs more clarification. Because I have read many times that without the presence of some negative comments or sentiment people are likely to suspect that the reviews they are reading are ‘filtered’ in that case the reviews are less trusted. So bad reviews are good for business!

However your point that negative reviews do more harm than the good done by positive reviews is a good one and not one I’ve seen anyone write about before.

A review process should keep the customer at the centre of what it does, and marketing results will follow.

I have done some follow up research to determine what star levels would motivate searchers to either consider or not consider a specific business which will hopefully shed some light on that.

another question that came to my mind was what about reviews that are overly negative or positive? I for one scan reviews for objectivity and overall fairness. If a review is somewhat fanboy-ish or bashing without significant reason and all the others are reasonably written, I tend to not take it for serious.

Very helpful and interesting research. From an smb perspective it confirms a long held belief to do all that is necessary to keep bad reviews from littering the landscape. They hurt. A lot.

On the survey side one can get results of this nature.

On the business side its more difficult to quantify. A business is incapable of measuring the number of people that read bad reviews and then never take a further step, versus people that don’t read reviews at all or those that read good reviews and take a positive step forward; or any other metric to quantify results. How does one take a metric that measures readership of bad reviews followed by a purchase action at a competitor…or a decision not to purchase?

Our anecdotal evidence is that we get customers and of those about 20% in a rounded basis affirmatively reference that they read positive reviews and the reviews helped them to make a decision to buy with our firms. In the smb’s we measured they additionally have very large percentages of customers who bought from us b/c of word of mouth. We assume that all or most of those who depended on reviews had not learned of us through positive word of mouth.

So really that 20% is a significantly higher number… in our cases.

Reviews: What a conundrum.

I take reviews very seriously – I search and read reviews about almost every service or product I buy. It’s interesting to see that the younger demographic are as interested in reviews as I am… a good sign IMO 🙂

I thought I was just a weirdo, although apparently not, but when I look at the review profile of a anything (business, product, etc.) the only thing I really care about is negative reviews. In fact, if I am looking at a review aggregating service in the first place it is already very likely that I have heard good things about whatever I am looking at. I am just looking at the review profile to see what the bad things are with and if those things are important to my purchasing decision when weighed against the good things.

One thing about reviews on sites such as google+ and other sites, such as yelp…is that the review is the carriers’ Its really not yours, nor is it under the control of the business about which you write.

Now the above isn’t necessarily relevant to the relative power of either positive or negative reviews…..but it gives you a sense of who controls what when one writes a review.

I was looking at the notes relative to a google + review I wrote and saw this set of comments:

” Your Google+ Local reviews and photos are publicly visible on the web under the name david xxxxxx and may appear in places like:
Your Google+ profile
Google search results
Google Maps
Local pages on Google+”

In the case of google + reviews google controls them. Neither the writer or businesss have any control. The situation is similar with facebook.

From an smb perspective I strongly like getting reviews that are presented in a way that appears similar to that of a third party source and give off that feel. But as an smb at least we control them, versus the review sites.

@Dan
I think your behavior is typical of folks that are familiar with reviews and use them regularly. I think in older populations they are more likely to take a “if its high” it must be good view of things.

@Dave
According to Google YOU are the copyright holder and you get determine for example if a business owner can use your review on the business website… didn’t realize you had such power eh?

Really? Didn’t know that. Where is that in their tos?

For smb’s that are managing reviews and requesting them, that is a nice bonus opportunity.

btw: I was recently calling people who recently left FB reviews to see if we could republish.

The entire FB thing is sort of rough on smb’s and all businesses w/ business pages…these days.

FB has acknowledged that they changed their algos. Business pages are not getting the views from fans that they once saw. FB wants these businesses to advertise.

Of people that see posts the vast vast majority see them on their timelines and never visit the page. FB has acknowledged big drops in page visits.

So getting reviews on fb pages gets tiny tiny visibility.

Alternatively that is where g+ pages shine. and frankly a high ranking yelp page or any page on a review site that shows highly in serps will get a lot more mileage…though a lot of those pages by other (IYP type) sites aren’t known as review carriers.

Thanks for the update, Mike.

Here is the discussion on the copyright issues surrounding reviews.

Excellent conversation. I had seen the first few comments and dropped out way too early as many subtle important points were added.

Still the carriers didn’t jump in. I’ve got to search out Andrew’s quote of Google TOS on reviews and the writers’s control of them. If our smb’s are asking for them I want to ask for the right to republish.

Subtle and important points. Over the long haul there are always opportunities for the carriers to lose, filter, or remove reviews. I’d like to keep them with the permission of the writers.

@Dave
I did ask Google to clarify unfortunately this involves lawyers and they have yet to get back to me on the point.

Andrew’s comment in the above referenced discussion is pulled from google’s tos here: http://www.google.com/intl/en/policies/terms/

It seems to me Google has allowed itself enough wiggle room to react if they deemed that too many reviews on G+ were copied and shown elsewhere.

For instance the general TOS refers to additional TOS per service that could be tightened or changed.

A good bit of grayness on this issue and a lot of non specifics that could result in google changing rules down the road.

😉 Heck. They have been known to change rules on the fly at times. 😉