It seems that the new layout first reported on October 23rd is now rolling out world wide. As noted at the time

The big difference is that the page now can be displayed in either a single, two or three column layouts depending on browser window width as opposed to the current fixed two column display. Reviews will now follow the same columnar structure as the rest of the page and will not be limited to a current one column display. While this view is not yet visible in mobile, one assumes that if the view were to become universal it would likely push to mobile as well.

The page adds three iconic based calls to action near the top; review, directions & photos. The review summary has been moved up the page and photos have been moved down the page. Geo information including street address, category, hours, description and map are now consolidated into a single card near the top titled “Contact Information. “Similar Places” from around the web no longer show and “reviews from around the web” have been moved up the page to be nearer the top.

However it also appears that Google, in making the change, has lost, at least temporarily, a number of reviews. The forums as well as some of my clients noted a severe decline in review counts or wildly inaccurate review counts. Barbara Oliver & Co Jewelry in Buffalo dropped from 65 to 38 reviews. Her local competitor lost roughly 30 as well. I assume that most of these lost reviews will return once the upgrade settles in. 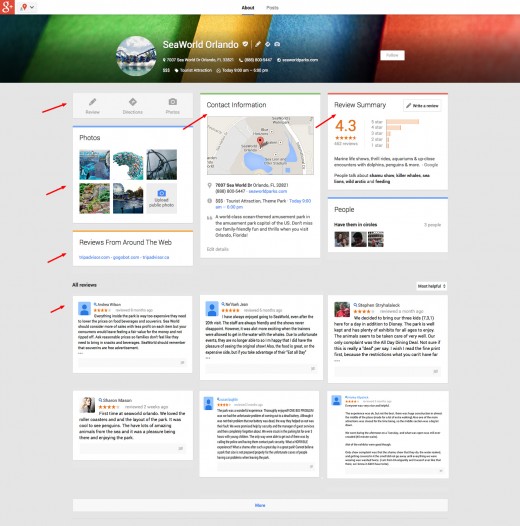 I don’t totally think the reviews are lost, they just get removed from the count so that presents the question as to what is considered a valued review.

Our business dropped about 10 reviews, but if you physically count them they are still all there and the rating didn’t change.

@Brittany
Yes I think you are right. Could just be the count and not the actual reviews. Interesting point.

Im not seeing the 3 column layout, but the listing now has a 2 column layout with photos and review score on the right with the contact info and business description on the left. Individual reviews are below in 2 columns.

@Stephano
The third column is only visible on very wide screens.

Can you check to see if it is review losses or as Brittany pointed out, just really bad counting?

Yes Brittany is correct. All of the reviews are present but are not being counted towards the total currently.

Also, the listing shows the first 23 reviews on it are from just a “Google User”.

I guess there’s some subjectivity here, but I’m loving the new review layout.

Hi Mike,
Not sure if it’s just the listings I checked but the “reviews from around the web” seem pretty messy. Some go nowhere and some go to the correct citation site listing but there are no reviews.

Just want to add… how thankful I am (we are) that when Google shakes things up like this we all have somewhere and someone to turn to to help make sense of it all. Thanks for all you do.

Has the ‘report a problem’ link disappeared as well? I can’t see it in the new layout. Can anyone help? Maybe there’s a different way to do it now?

I am seeing the count off as well. Also on my computer I see reviews duplicated if you keep pressing the “more” button.

I just look at several GPL pages, and I don’t see any correlation between the review count number, and A Google User reviews, or reviews from people that didn’t have a photo.

I think Google is just displaying the number incorrectly, for the time being, instead of devaluing reviews from A Google Users / no photo reviewers.

@Derek
I think you are right. Although it now seems that counts have returned to normal.

@David
Is that still the case? I did see that after you mentioned but it seems to have corrected itself.

@Joy
Is there still an issue?

My review count is down from 42 to 22 but all customer reviews are still there if you look, It will take a couple of days to sort out and hopefully we will all get the correct count on reviews

my Google + Plus Map Page (or what ever it is called!) : https://plus.google.com/+Fix-computersNet/about?hl=en

Mike, yeah there is. See this thread – http://productforums.google.com/forum/#!topic/business/56dmP3963JU

On some listings, below the description, there’s an ‘Edit details’ listing (open to everyone). That takes you to the old, familiar ‘Report a problem’ page.

But… On another listing I checked out, the link isn’t there! Ironically it’s for a duplicate listing (that Google created themselves) and I can’t notify them about it. Very frustrating!

@Steve
If the listing is in Maps you should be able to report it from there. Or perhaps even the front page of Google.

@Mike
Unfortunately it’s not – I’ve checked both instances and no joy (it’s not in Maps and it’s not appearing in Google). Looks like I’m screwed… :-/

@Steve
If it ins’t in Maps then it won’r ever really show. If it doesn’t disappear on its own in a few days just get a call back from support.

Always nice to have a place to come to find out what’s going on! Thanks, Mike! If it hadn’t been for you yesterday, I’d have been a state of panic. 🙂 FYI, our Google review count was corrected about an hour ago.

Ha! I spoke too soon! Gone again. But at least they seem to be working on it. Hopefully.

As others have reported, I’m still seeing the review count wrong; the count is lower than the actual number of reviews showing on the g+ page (Canada). I think they are heading in the right direction with all of these changes, and the severity of issues seems to be going down… not the number of issues, but the intensity of the damage 😉

we went down from 50 reviews to 25 overnite. the reviews are still there just not on the count in google. seems like only reviews 1 year old are legit at the moment. this search was from ontario canada at 12 noon. as it is everyday 😉

This seems like this could beneficial for pages with outdated reviews that feel futile (at least to me) to address now. For example, a customer complaining about an experience a couple of years ago.

Won’t get my hopes up. Sounds like they’ll rebound.

Does anyone happen to know if there are avenues for expunging really old reviews of little relevance? Or are they on there forever?

Unfortunately, I can’t currently post to Google+ (get errors), but it seems that Google is changing the layout again (besides from having the review count wrong). Please take a look at:

Brand new additional update just discovered and posted at my forum.
REALLY like this one. Here is screenshot.

Sorry hit enter before I was finished.

Obviously the big difference in that screen shot I just posted is the data card on left of the cover image and follow is over on left too. Really nice and clean. I really like that new look!

But I was also wondering… I keep turning off the “New Maps” and using the originals because I don’t see the link to the Google+ Local page from the new layout. Also, I don’t see the old embed and email link information. Am I just looking in the wrong place?

Great info, thx for the post. We are still waiting for Google to combine our old school local page with our Google plus page. This seems to be taking forever. Did this happen for everyone automagically or did you guys have to send in a request to google?

@george
It happens automatically. Google left the hardest ones to last.

Speaking of new updates, your on google plus, did you get the new google plus name?

We lost reviews but some have come back. My major concern is the overall Rating. We went from a 5.0 to a 4.5. All our reviews were 5 Stars and still are so that doesn’t make sense. My G+ page https://plus.google.com/+WhiteSandsRealty/about?hl=en