Google has never fully supported multi-lingual listings in Places very well. At one point Google was suggesting that you create a separate listing in a different dashboard in the alternative language. Unfortunately Google was unable to keep those listings from merging and the practice was ultimately prohitibited. The current dashboard offers no real alternative. MapMaker however does offer limited support for multiple languages in a single listing. While the user experience with this is still not ideal (for example you can’t direct a user to a specific landing page) it is better than leaving the translations to chance. I asked Dan Austin to write up a guide to using MapMaker. Here is a link to a PDF Cheat Sheet (without images) of the process.

As a side note, MapMaker is not for the faint of heart and is very quirky and often bug ridden. Caveat emptor!

If your listing has international customers or your country is bilingual, a good way to attract their favorable attention is to add accurately translated names to your listing. These will show up in the search results better, since the searcher may be viewing your listing through their native language web portal.

I’ve selected a famous brand listing, The Hilton Club New York, in a world-renowned city that brings a lot of tourists from around the world to illustrate what you can do to enhance your listing with additional languages for display on Google Korea.  I’m going to use Google Map Maker to do this, since it offers an opportunity to not only explore MM but also enhance your listing in a way that your Dashboard or Support may not be able to accomplish.

2.  Find the listing by typing it in the search field (the more details, the better)—it works just like Maps. 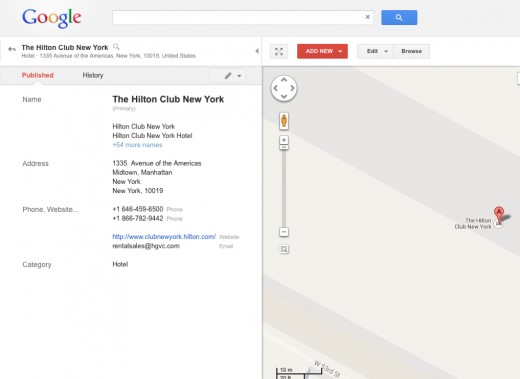 2a. (Alternately, find the listing in Google Maps then open it in MM by clicking on the Edit in Map Maker link on the bottom.)  If you can’t find it using search, use the address, then right click, Find near this point.  It will usually turn up. 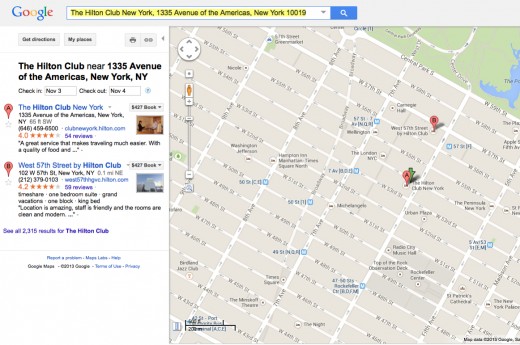 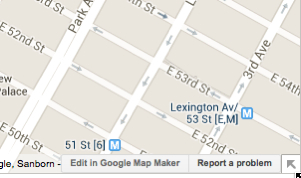 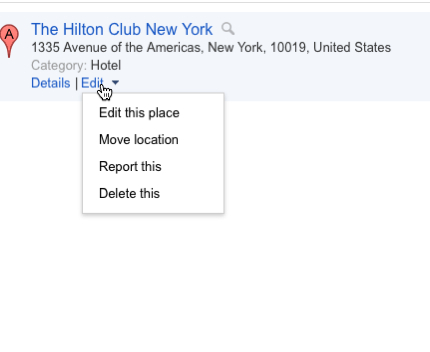 4.  Click on Name, then Add more names below that.

6.  Start adding names, or correct existing names/tags.  Each name should be language specific (English:  The Hilton Club of New York), and should be tagged with the following tags:

Using the above system and the example, I would create something like the following for the English and Korean languages: 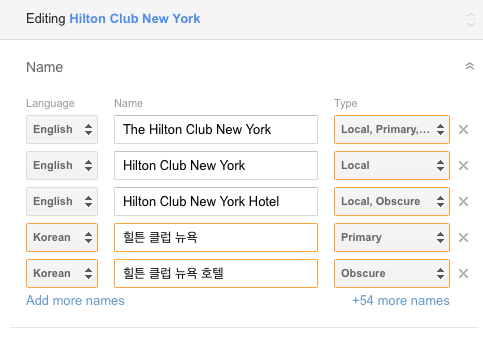 Google translation (not necessarily accurate, but used as an example) of the above names, in order:

You can have as many translated names as you want, for either the specific language or languages in total (provided that Google supports that specific language), but you can only have one name as Primary for any given language.

(Note:  If you hit a hard limit on the total number of names you added (Add more names disappears; sometimes you can only add 5 new names), you can save the edit, as below, and then re-open it, and add more names.)

If, as in the case of this listing, you find a bunch of names that are wrongly tagged in a different language than the provided “translation”, either correct them by accurately translating the names or delete them.  For example, (Spanish) Hilton Club New York (Primary) probably isn’t the Spanish translation of that name.  MM doesn’t provide an easy way to organize names, and it’s not always clear if there are redundant translated names (for example, two Norwegian tagged names).  Not infrequently, to get a sense of the redundant names, I’ll either start over by deleting them all, and adding new ones, or copy/pasting them into a separate document (like a spreadsheet) to see all the names.  Maps often adds these non-translation translations to popular features using a separate data feed, even though they’re not ‘translations’. 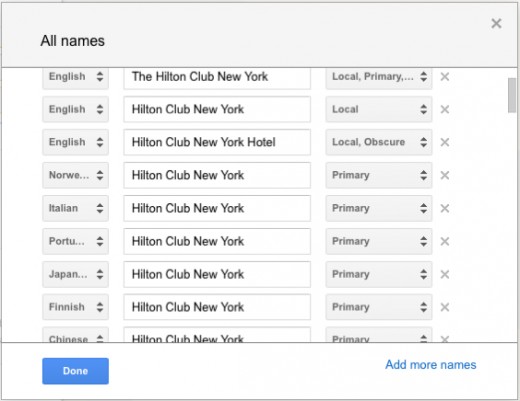 8.  Add an explanatory note in Comments, if necessary, and select Correcting Poor Data as the reason.  Since GLEs (Google Listing Editors, from the Maps team), rather than GRs (Google Reviewers, from the MM team) often review claimed POIs (point of interest), it’s helpful to add an explanatory cut-and-paste generic note (i.e. I’m adding additional foreign translated names, and correcting the tags for the English names so they appear correctly on Maps.) and, if necessary, alert Support in advance that you’re going to be fixing some of your POIs from MM.

10.  Wait.  Usually a few days to a few weeks.  Pending edits stays under the My Activities, In Review (or Everything, for everything)  As noted before, the edit can be Denied, Accepted, or Approved.  If it gets Denied or Accepted (without approving the changes—check in the Details, History and/or Published to ensure that all your changes were accepted), then save the link from your MM sidebar (My Activities, Everything) or the email you’ll get, and contact Places Support to have them override the GLE (or GR) and approve the rejected changes.  Approved is the most desirable state of affairs, although as often the case, the review process can be occasionally chaotic and erratic.  (Note: Accepted is just another way to reject your edit without affecting your approval rating, visible as a percentage if you hover over your profile name or picture.  Lower percentages can send your edits into moderation, and is a measure of your trust in the system.)

Avoid using any misspellings, w*ird [sic] characters, ALL CAPS, and anything else that marketing suggests to increase the name presence of the POI on Maps.  Names should be accurately and reasonably spelled.  Google is really good at providing suggestions for misspelled words.

This is a great article, thanks for the tips and sharing!

I have a quick question for you. I’ve noticed that some of my clients are experiencing same issue, but in terms of business description. Lets say we’ve put the content in the dashboard in English and it’s live in the listing, example with Racine’s Google plus page is provided bellow:
https://plus.google.com/100639265725631905568/about?gl=uk&hl=en
and when the users search in let’s say Google.de the page will be seen as:
https://plus.google.com/100639265725631905568/about?gl=uk&hl=de
Where the description is not available, as Google is not translating it to German. As a result people who are located in Germany and planing to visit a restaurant in London during their stay won’t be able to see the business description.

I checked in MM, but there is no option to add Multilanguage? descriptions, can you advise the best practice in this case.

Yes, as I said before the article, Google does not have a very good approach to the many issues that confront multilingual listings. The description field is one area where they do not offer any real solution. There are others.

The only positive in your description scenario is that the description, on the About page of your Plus profile, is very, very rarely ever seen as it is so hard to get to.

What are the options when it comes to optimization in different languages? We’re starting to deal with some international clients and we obviously want to rank of multilingual listings for targeted keywords/markets.

Bless you for publishing this right as I am starting to list a French Canadian client’s business! Your timing couldn’t be better. Thank you!

This has been the exact solution I needed for my problem (multiple languages for one listing). Too bad that Map Maker is being put down in March 2017.
I would also need to specify a different url per language for the same listing (as we have a specific website for each language…). Can you please give your idea on whether that is possible?
Thanks!

Google only supports one URL per local listing. The only way to deliver different pages in different languages would be to auto detect the users location/language and load the page that way.