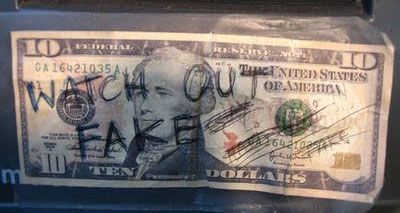 The NY Times is reporting that the NY State Attorney General will be announcing a crackdown today against 19 NY based companies, both SMBs and “reputation management” firms, for posting fake reviews online.  The companies will pay fines totaling $350,000 and agree to cease to the practice. “Among those signing the agreements are a charter bus operator, a teeth-whitening service, a laser hair-removal chain and an adult entertainment club. Also signing are several reputation-enhancement firms that place fraudulent reviews on sites like Google, Yelp, Citysearch and Yahoo”.

The findings presented no big surprises; reviews are available for purchase for as little as $1 each, “reviewers” often resided in Pakistan and India and many “reputation management” programs frequently offered “bribes” of as much as $50 as incentives for reviewers.  What was surprising was the forceful assertion of the NY State attorney general Eric Schneiderman, that fake reviews are “even worse than old-fashioned false advertising. When you look at a billboard, you can tell it’s a paid advertisement — but on Yelp or Citysearch, you assume you’re reading authentic consumer opinions, making this practice even more deceiving.”

The fines levied were not insignificant although not as high as those levied in NY in 2009. A Buffalo based web marketing firm that was doing reputation management for 30 clients incurred a fine of $43,000 and a Staten Island tour bus operator received a fine of $75,000. Apparently the other firms will be highlighted in a press conference later in the today. Ironically the offending firm in Buffalo received two (yes two) do-follow links from the NY Times. Expensive links, those.

According to the NY Times the owner of the tour bus company, in response to blistering service related issues noted in on line reviews (“like buses never showing up”) personally oversaw a company effort to get fake reviews. “Mr. Telmany hired freelance writers, mandated that his employees write favorable reviews and even pitched in himself. He posted a five-star review on Yelp that began, ‘US Coachways does a great job!'”

While I am glad that NY State has stepped into the breach once again, as anyone following my blog knows this is not a new problem.  I have been reporting on it extensively since at least 2009 when NY State took its last enforcement action against a plastic surgeon. As I noted at the time:  This settlement should come as welcome news in the wild west of local marketing as it not only strikes at bogus reviews but at deceptive and misleading websites. Obviously the cases are many and State resources are few but it won’t take many cases like this to grab the attention of locksmiths, lawyers and others to force a change to their online marketing strategies.

Here are four years later and the enforcement has been worse than lax, abuses continue and while Yelp, Google, TripAdvisor and Edmunds have made some public efforts to stem the tide of fake reviews with lawsuits and review filters, it is not clear to me that they are obvious or frequent enough. Nor that the chance of getting caught carries with it enough risk to disincentivize those using the tactic.

NY State is but one of 50 states and the only one to have entered this particular batter. Obviously state resources are stretched and many have bigger problems. The NY Times reported that this enforcement action will have impact beyond NY State borders but unless there is additional enforcement both in NY and other states, the problem is likely to persist.

Update: Here is the attorney general’s press release with some additional details and names of each of the companies that have settled. Apparently the highest fine was close to $100,ooo. The above two companies had a total of $118,000. That leaves $132,000 in fines split amongst the remaining 16 companies for an average of less than $10,000 per business. It is interesting that the company that paid “just under $100,000” was not apparently named.

I say this with mixed emotions….Good. As a local marketer I think this is great and a good step in the right directions. As a concerned citizen, I feel that the government regulating reviews might be crossing the line, no matter how bonafide the reason may be

@Alex
The idea that a business could pretend to be an individual and in doing so make false statements that mislead other customers should be a cause for concern for any citizen. Diluting the idea of free speech to apply to these situations degrades the value of free speech.

he could headline his next Yelp review: “US Coachways does a great job!… we’re even featured in the NY Times!”

I think this is another good step for governments and consumers; holding web marketing firms accountable for the damage they cause real business owners is something that should have been done a long time ago. These poor saps are going to have to pay twice as much for another SEO to recover their image and reviews, if it can even be done.

When will someone step in on “RipoffReport.com”?

It’s encouraging to see more of these pay-to-the-top tactics being not only identified but dealt with. Developing a positive reputation and receiving positive feedback should be the result of hard work, and something to be proud of. When a dollar amount can circumvent the hard work, it’s not only frustrating as a competitor, but totally deflating to organizations without the funds to pay for these kinds of reviews.