Microsoft Buys Nokia – What will become of Navteq/Here?

Microsoft bought Nokia today for $7.2 billion dollars. Nokia, you will recall, bought Navteq in 2007 for $8.1 billion in what was hailed at the time as pivotal move by Nokia into location based services.

But as Horace Dediu pointed out,  by late 2012 Navteq had been losing about $1 billion a year for Nokia and the purchase effectively had cost Nokia’s stock holders $11 billion in total since it had been acquired.  He notes that Google is rumored to be spending a similar $1 billion a year to maintain their Maps data. Tomtom, now worth about $1.5 billion in total, appears to have done little better with their $4 billion TeleAtlas purchase.

Neither company has kept up with Google in the pace of map development and certainly not in the pace of mapping updates. If you have ever had to suggest a map change to either TeleAtlas or Navteq and anticipate the map update, you know that you can get very, very old waiting. Both Google and OpenstreetMap have the ability to get updates through their systems in weeks not months or years. Neither Navteq nor TeleAtlas seem to.

Owning a mapping company has not provided much if any value to the purchasers. And it would appear that the expense of running them has constrained their ability to compete with Google.

Will that continue to be the case going forward? Can Microsoft/Nokia and TomTom extract enough value to continue their expensive and not very successful efforts to maintain the maps? It would seem that the world is not a big enough place to support 3 mapping companies even when the maps are used to support the other sales efforts of their owners. As reader Marc points out, this leaves Here as part of Nokia’s network infrastructure business and a likely drag at that. Hardly a long term match and likely to be spun off and perhaps more appealing to Apple or Samsung. What value could it possibly bring?

And where does that leave Apple? Buying a  a mapping company is one thing, maintaining it is quite another. 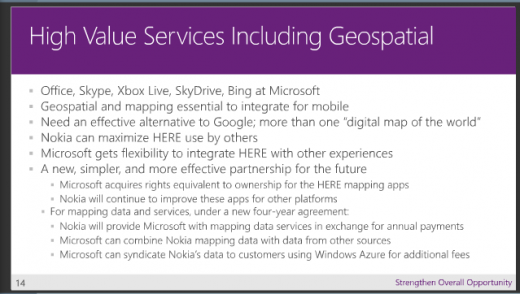 NAVTEQ (aka HERE) isn’t part of the deal. Microsoft will continue to license the maps: “Microsoft will become a strategic licensee of the HERE platform, and will separately pay Nokia for a four year license.”

@rich and Marc
I obviously missed the nuance of the 4 year deal for Here/Navteq. While Here doesn’t get a sugar daddy in the deal it still leaves them with a huge nut and the costly task of mapping the world. This might make them an attractive partner to Apple but doesn’t make it clear to me how they will make a $ go of it unless they are left with oodles of cash… which seems unlikely. Certainly spinning them off makes sense. But how would they fund that? The stock market? A separate sale?

The other way to look at that is that Microsoft did NOT see Here/Navteq as strategic nor of significant value.

It seems like the Microsoft relationship with Nokia/HERE/NAVTEQ stays about the same except that they lock up in a 4 year contract. My bet is that HERE is spun out of the new Nokia: combining a mapping business, a network equipment business and a patent portfolio makes no sense. HERE is fortunate to be rid of the Nokia handset boat anchor. Not sure they will compete with Google anytime soon but they will look less competitive to Apple or Samsung than they did when owned by a major handset rival.

Navteq has a big presence outside of the media/internet unit (Here). I believe they bank on data services including GIS for governments, logistics and internal corportate purposes

I agree that HERE/NAVTEQ may get spun off or sold. Apple is the most likely buyer, but there are a couple of big obstacles. First, they don’t have a history of buying large companies. Second, as you imply, they would need to change the culture so that updates roll out much faster. Still, Apple needs to be able to compete with Google Maps if they are to fully take advantage of and monetize their mobile/location strengths. And NAVTEQ knows how to integrate the data that Apple has so poorly piecemealed together. Great point about the $1 billion/year cost of maintaining map data BTW.

@Rich
I am not so sure that Here is a likely candidate for Apple.
1-Apple seems to have dramatically improved their data integration capability and their map has improved accordingly
2-They could buy TeleAtlas but have chosen not to (and at a price probably less than Here)
3-Here/Nokia is receiving annual payments from Bing who has a stated interest in keeping an alternative to Google going.
4-that would include keeping Here out of the hands of Apple
5-Here has just released a white label car os that they seem to be very interested in growing

I think as long as Here/Navteq and TeleAtlas provide an alternative to Google both Apple and MS are happy. Neither really needs to bite the bullet and pick up that nut. That might change if either makes a move but for now I think it is status quo.

Valid points. I wonder if there is a contract killer in there on the HERE licensing deal, in case it sells to a competitor. I’ll also add that lots of companies are tackling the car OS/nav/infotainment space and we’re a long way from seeing who the winners will be.

Thanks for all you do here Mike. You share great info and it’s on my must read list.

I think the potential importance of mapping software is only beginning to be understood. With the kinds of technologies already out on the market and in development, the applications for maps are only growing.

I think you are right for now, there doesn’t seem to be much value for these maps in the present with other services like Google in the market, but this could be a play for the future. Web and phone users are starting to heavily rely on map applications, and a dependency is developing. Having a maps software will probably become essential in the near future, and Microsoft/Nokia are likely banking on their tech becoming useful in the coming years. Might be better to sit on a product that loses money in the present than miss out on major opportunities in the future.

@Paul
I agree that the full value of a mapping solution is yet to be known and it may be worth much much more in the future than today. The problem has been and will continue to be that Google in investing that billion a year is creating an ever widening gap that will continue to put other map players at a disadvantage and leave them with a faustian choice: lose money or fall behind. Hopefully MS understands that and the annual payments will cover Here’s nut.

I have a Garmin GPS with navteq maps, the worst maps I have ever worked with. They have woods roads marked as paved that I cannot get through with my ATV. Wrong name on some roads. Roads that are not there and never were there. Street names missing then others all off by one street. As a forest technician I have worked with maps most of my life and these should not be allowed on the market. Somebody is going to get killed getting on roads that they should not be on. I know that common sense should be used but in today’s schools they do not believe in common sense, it is no longer part of the equation.

@Eric
Yes, with the decline of both TeleAtlas and Nokia, we are living in a unipolar mapping world.

There is profit in map data, but not of the order of magnitude that makes the large players other than Google want to include it as a part of the core business. Data acquisition is to prevent others from gaining a competitive advantage in that space, also deception and the infliction of damage and strategic error.
It makes sense for Google cause they own search and the data is relevant to the most profitable sector-they are not being particularly effective in execution in the geographic space, advertising. For all other players licensing the data makes more sense financially but for strategic reasons it is not the best option. Perhaps Google is still licensing some of it’s data, there is no real way you would know. MS may be wedded to Navteq data but most users are at least dual source. Apple probably doesn’t want to focus on navigation devices as it’s core business especially with the financial downside of owning the data unit, which will continue to be a loss leader.

Hi all.
I have a Navman GPS device which also uses Navteq maps. So two of the three “classic” GPS device makers, Navman & Garmin use Navteq and TomTom uses TeleAtlas. I have had very bad experiences with TomTom and am currently doing battle with Navman.
The GPS device manufacturers need to get their act together very quickly when it comes to ease of use and timely support or they will soon become irrelevant as they get over run by smart phone apps, particularly on Android/Google phones.
I don’t own a smart phone, YET, but it’s getting closer.
Great site, thanks.