Google has announced in the forum that they have fixed one of the previously noted issues with the new Google Places for Business Dashboard; the speed of photo uploads. In the old Dashboard it might have taken a month or more for photos to show. When the upgraded Dashboard was released last month, it took several weeks. Now apparently, photos uploaded via the new dashboard should appear in several hours. Here is the update from the forum post:

If you’re using the new dashboard, your photo uploading experience is now improved. Photos uploaded via the new Place for Business dashboard will now go live in hours in most cases. You can send us feedback about this and other features by clicking on the gear on the right -> Send Feedback. Thanks! 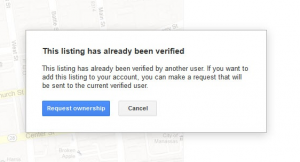 In other news, Josh Volk of LocalSeoUpdate.com notes that Google has implemented the one and only one claimant rule on listings via the new dashboard. If a listing has been previously claimed, it is not possible to reclaim the listing into a new account without Google intervention. If you are unable to contact the previous claimant to remove the listing from their account and if the listing has not been edited over the past year, Google support will immediately approve the new claiming request. If however the listing has been edited within the last year then Google support “will call the business owner to truly verify everything … and can then remove the claim from the other account”.

And last but not least, Google has also updated their Data Highlighter and Structured Data tool. This tool allows you to add “rich snippets” without adding any code to your site.

2. Structured Data Markup Helper Tool: this is a very easy way to get code samples for structured data markup using your own content. Using a process similar to Data Highlighter, you highlight your content and it then generates example HTML you can download and use as a starting point to mark up your content.

Thanks for the update Mike. The one claimant rule is causing issues for a client of mine right now. I discovered a duplicate listing, but didn’t control the primary page which ranked for local searches either since the account is new. The primary local page was previously claimed by another agency. While we were attempting to get control of that listing, I claimed the duplicate thinking I’d remove it from Maps and then delete it from the client’s account. The duplicate can’t be deleted and the good listing can’t be claimed.

This is the message we received from Google:

Thank you for contacting the Google+ Local Team and letting us know about a data issue on your ‘[REDACTED] local Google+ page. It appears that you are one of 2 verified accounts associated with your listing. This can create data presentation issues. Please get in touch with the other verified owners on your listing in order to streamline your updates. I can only provide the domain name of the other owner’s email: ******@yahoo.com.

If you’re unable to contact the verified owner of the page directly, we can pass on a message for you. We will need your authorization to share your message and contact information. If you would prefer we do this, feel free to respond with your message to the owner. If you have any additional questions please contact me via email.”

Have you seen this situation before?

@John
This has just been implemented so I have not run into it exactly as you have. I guess I would play it out with Google contacting the other claimant and see if they will release the listing.

nice to SEE! Thanks for sharing Mike….

Still wondering when Google Places will finally dissapear and be swallowed up by Google+ Local Pages – have already seen old Google Maps links going towards the + pages….

@christopher
Its not going to disappear it is being upgraded.

@John
My colleagues and I have run into that situation several times, and as Mike noted, it plays out exactly as Google implies. The verified owner will be contacted through the email address used to claim the listing. If the claimant of the listing ends up not responding, I would ask Google if the listing has been dormant in the other account long enough to have it removed.

The one sole claimant stipulation now feels very similar to instances of Bing Local/Places pages that are already claimed because these situations require the help of a support team. Good thing Google implemented phone support when they did.

Support and responsiveness on claims for control of the dashboard should be an enormous improvement and aid to many many smbs.

Our problem is we control the duplicate, not the listing that ranks and has reviews. I don’t want to see the good listing come down, I want to delete the duplicate I claimed.

Have you encountered this situation?

@John
If the duplicate is identical the displayed listing will likely merge the two listings over the next 6 – 8 weeks. And if the information is different then what Google said: “This can create data presentation issues.”

In the meantime you need to do what they said: “If you’re unable to contact the verified owner of the page directly, we can pass on a message for you. ” and request that the previous owner remove from their dashboard

Thanks for the latest update Mike. One new inconsistency i’m seeing is how G+ is handling hyperlinks within the G+ Local page “Story” section. In some profiles everything is formatted correctly and the contextual links are clickable, but in others, they appear un-formatted, not linked and surrounded by astericks. For example;

Any ideas? have you seen this?