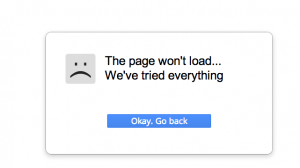 What Else is New Dept: There is a new bug with the Google Report A Problem for SABs: If a user selects the report a problem link via Maps or G+ Local they get a “This page won’t load…We’ve tried everything” message. At least its cute. Although that sad face icon is eerily reminiscent of my first Mac when it had a hard drive failure.

Can You Imagine That? Dept: This came to via me Google Forum  Top Contributor (an unsung hero who you should be sure to follow in the forums) Treebles. “Google received an ultimatum Thursday from German consumer organizations that want it to start answering questions from its users via email. Germany’s Telemedia Act requires businesses to provide an email address to allow customers to contact them quickly. But, said Elbrecht, “It is not enough to just provide an email address that leads into emptiness, you also need to be able to communicate over it.” Responding to users attempting to get their questions answered with automatic replies, as Google does in Germany, is not sufficient, she said“.

Maybe There will Be A Local Competitor to Google Yet Dept: Apple Insider reported that Apple’s iOS Passbook app was used to drive a successful coupon campaign for a UK restaurant chain. “The campaign allowed customers to get £5 off their bill when spending £30 or more. Harvester issued almost 16,000 vouchers in two weeks of campaign operation. Of those, almost 700 were redeemed during the course of the campaign. Overall, the campaign had a cost per action of £3.41. The solution gave a frictionless consumer experience, as with two-clicks a unique voucher code was delivered straight to their device, within Passbook. The voucher was then redeemed whilst  paying the bill, directly from the EPOS terminal, giving the restaurant additional insight into campaign effectiveness.”

Thank God for Small Favors Dept: Google, in the fine print of the T&C’s for Glass Developers, are apparently banning ads in products for the new Glass product. Its hard to imagine relevant ads with an always on wearable eye glass computer. Its not so hard to imagine irrelevant ones.

I’m one of those SAB that “finally” got a reply from G+ Local C/S Rep and while they offer the link to the forum on how to “hide your address” this was done months ago. What’s puzzling is my G+ Local Listing shows up in the local search results for a couple nice KW+Geo phrases, I still get “pending” icon even though Social SEO Los Angeles is in the A-Spot?

@Phil
Imagine the audacity of this Germans!

From what I’ve seen, this “Report a problem” bug is not a bug at all, but something that Google seems to have intended for all SABs. I am now having a very difficult time finding any of my SAB clients in mapmaker and it looks like Google wants it to be that way.
The only option I have for editing my listing outside of the dashboard now is to submit a “My listing has incorrect information” form to Google.

The MM page is gone. Previously, it meant that the MM page had been deleted in MM, and the Place page hadn’t caught up, a two year (at least) problem with SAB POIs. I can only surmise that this is a deliberate de-evolution, to segregate the SAB pages from MM under the mistaken impression that this is a better solution than the current status quo of allowing mappers to freely edit SAB POIs in any UI. Now no one can do anything at all!

The original is still visible on the old MM community edits page, by plugging in the CID from the error page in the following URL:

Any edits you make aren’t visible in MM, either in the profile or on pending edits.

If you want more spam, this is definitely the way to go, as the Google Local Reviewers who review community edits are poorly trained and unfamiliar with spam, much less Google Places Quality Guidelines (unlike the Google Reviewers on GMM), even when provided with adequate resources to investigate the spam.

Google+Local is more concerned with the quantity than the quality of the data, which is reflected in the abundance of Local spam.

@Dan
It seems some sort of conscious policy to prevent address from showing and push the SABs through an internal review process of some sort.

@Mike
Simple solution to this problem:
Create a visible checkbox in MM, similar to Closed and Removed. If the checkbox is checked, the business is hiding the address. You can also–wait for it–check the checkbox, to hide the address on the Place page. The checkbox syncs with the Dashboard. Add a help button (‘Don’t delete this SAB, as it’s hiding its address’). Announce a policy change on MM forums. Problem solved.

Mappers on MM are usually pretty smart, and they follow guidelines (published or unwritten) to a T. Can’t really credit Places with the same. Places just lurches from one disaster to the next with each product iteration–there’s no middle ground, no eye of the storm.

@Matt Cheah
I am having this problem as well, but ONLY with my SAB businesses. I am trying to get my category changed, but no luck so far. I even called Google and spoke with a Places rep. who told me that this was a + team issue. He said he created a ticket for that team, but the listing has not changed. This was over a month ago.

@Mike
Regarding changes to G+ Business listing. Is it better to make changes in the Places dashboard or on the G+ page itself through “edit details”? Why have two different places where changes can be made? Are changes made in one reflected in the other?

If you look now, you’ll probably see that the message says “Editing of this feature is now allowed.” I would hazard a guess that this probably won’t be going away for a while. It’s quite a pain.

@Matt
Yeah, just saw that for the first time last week. Didn’t think it was a good omen.