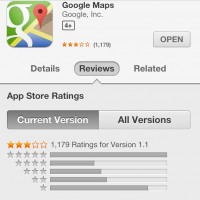 Early last month, Google released a 1.1 upgrade to their iPhone mapping product that was faster, integrated Google contacts and included more countries. Apparently though the upgrade has not gone over well with users as the bad reviews seem to be flowing into the App store at a significant clip.

Since its release 5 weeks ago there have been 1,179 reviews of which a great many were negative. The initial release was greeted with instant savior status and 10’s of thousands of positive reviews. Complaints about the new version included high levels of data usage, increased difficulty of use, screen dimming issues, directions failures and usability problems.

There is more than a little irony in this. I suppose that there is some possibility of a review smear campaign, although that seems unlikely, it does point out how hard mapping is. Even when you are Google.

Who knows if reviews are fake or real anymore, eh? Mentioning a “review smear campaign” is interesting, as many of these negative reviews seem to be quite expertly written (from what I read in your screenshot.) Though I’ll have to rely on Occam’s razor to assume many users are just unhappy with the latest version.

@Marc
They seemed real to me and your explanation that it is the simplest explanation is a point well taken. Its what I assumed about them.

@Phil
Yes, it is hard to understand how it could go from so immensely popular to turkey in just one update cycle…

Hey what can we say. People are being too picky whats wrong with auto dim its. to help you right. If you really want something better go with android anyway.