Two weeks ago in Canada,  Google rolled out an Easier MapMaker Interface that took community edits made via the Report a Problem link on a G+ listing and integrated the input directly with MapMaker. That interface has now rolled out to the US. It does not appear that this interface has rolled out in England or Germany but it has rolled out in France and Mexico. I would be curious to hear what other countries do not have it yet and which do.

The change means that all of the information changed by the public will now go directly into MapMaker and become part of the MM approval hierarchy; some edits will be bot approved or denied, some will be done by MM volunteer and some by Google staffers. As RER Andrew Sawyer pointed out two weeks ago, this change should improve addressing issues that revolved around discrepancies in between how Report a Problem  and MM handled things like suite numbers (although whether it will really solve the problem is unclear). It also means that comments made on Report a Problem form will be seen in MapMaker. It should also make it easier to achieve consistency across the Places Dashboard and the MM data. This is moving Google towards a simpler array of databases where changes reside prior to their approval and inclusion in the main Google Local index.

Update: Here is a list from Google of countries that now have the new interface. For once Denmark was not left to last. 🙂 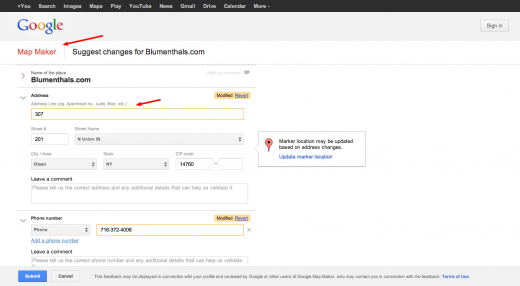 Indeed an interesting choice of countries to have the new interface introduced to first. I am not sure why the UK or Germany, for instance, were omitted.

No for once we were not the last – I have noticed this too 🙂
Thanks Mike.

@Nyagoslav
Yes, I agree. As I’m UK based, I was also reading the reports of the update and looking out for the UK inclusion in the update, but alas dissapointed and puzzled not to see it.

Actually Helmut (one of the Google Places Top Contributors) said that it is possible that countries like the UK and Germany might not be included because Map Maker hasn’t officially been rolled out there. And while I agree that this is a very probable reason, it doesn’t explain why the update hasn’t been rolled out everywhere where MapMaker IS available.

On that note, it’s also surprising that MapMaker still hasn’t rolled out here – it’s been a waiting game that’s for sure. I skip by the discussions about MM as we don’t have it yet.

Thanks for the top-notch info, Mike.

I’m not clear on one thing:

“This is moving Google towards a simpler array of databases where changes reside prior to their approval and inclusion in the main Google Local index.”

How is the relationship between the two heads of the data-monster (Places data and MapMaker data) going to become “simpler”? I mean, I know the changes will be piped over to MapMaker more quickly, and it sounds like the bots will do more of the heavy lifting from now on. But is that the full extent of the simplification?

There has been multiple directions for data movement through multiple pipelines into holding areas that would then be moved into the main local index.

My best understanding of this opaque situation is that changes from Places went one direction, changes from MM went another and changes from community edits went to a third. The pipelines used to be slow as well so there was a huge delay before this data was approved either by bot, volunteer or Google human moderator. These all had different moderation rules.

My sense is that data in the near future will be into two or possibly one holding areas (MM and the internal equivalent) and many edits will move in near real time from many inputs (business edit, MM approval) into the final index. We are seeing glimpses of that with the G+ Page interface and the MM approved edits but not with the dashboard. This alls seems to have occurred with a change of the underlying architecture from a web result to a knowledge graph structure.

Its complicated and I am not sure that I fully understand the data flow…..but it does appear to be consolidating and moving faster.

There could be licensing issues with those countries as well. IE Google may not have a large enough database of their own listings and must rely on licensed data to complete the lists. Which might preclude Google’s ability to edit/change update the data.

Very interesting. Thanks for the detail. This just begs for an infographic (particularly a “before-and-after”)…

Hey guys, when I announced this yesterday in an older post here at Mike’s, Dan Austin a Map Maker expert weighed in with some potentially serious problems we should all be aware of.

And a pro just weighed in on my forum saying “manage this page” is now not working right on most of his listings. So I’m investigating that and just came here to see if anyone else was reporting problems.

If you run into issues with editing POIs that have ‘missing’ data (usually, categories, telephone numbers, and websites) using the new UI, you can still edit it using the old POI:

Just plug in the CID number (which is still present on the new MM UI).

We see this in MM, a lot. Some suites that are visible in Details view ‘disappear’ in MM when you edit them, presumably because MM doesn’t recognize one of the fields in the Dashboard where you normally place the Suite (if there’s a normal). MM is not a complete repository of information–much of the data is either hidden or missing, such as the Description in the Dashboard, some payment options, etc. Maps likes to build categories around other categories–Park becomes Park, Parks, and some categories don’t translate well to MM, becoming the dreaded gcid:category in MM, as each database has their own unique category dataset. Showing 24/7 still hasn’t been fixed–you can create it in the Dashboard, but not Maps or MM, but they’ll still show it as open 24/7, provided that is was done from the Dashboard. So, problems.

I think the only way to ‘fix’ this is to do an initial sync from MM to Maps, overwriting the Maps data, but unfortunately this will end up destroying a lot of good data (categories, telephone, etc.), which is probably why they’ve avoided doing it.

I find a lot of my submissions (from Canada) get denied by the bot… and all get approved via MM volunteers and Google staffers (I’m honest & straight forward about corrections).

I just wish I knew how to avoid the bot. I’ve put in a number of corrections regarding a bad credit financing company that has a listing in a city (address hidden & 1-888 phone number) in which it doesn’t have a location; every one of my correction submissions has been denied by the bot. The business is actually located 200 miles south, in a different city. No address is on the site, and no local phone number. Calls to the business result in being told to ‘apply online’ or visit the location in the other city… this is a vagrant abuse of Local Places guidelines, and I can’t get it fixed. Thanks bot!

@Andy
According to Joel, a lot of bot denials are a holding state really just pending human approvals

that would be sweet 🙂 I’ll keep you posted Mike