Last night Google announced that they had formally upgraded their Local listing phone support rolled-out in January to include data issues in addition to the previous phone support that had been added for verification issues. Commenters have previously noted that Google support personal had responded to requests for data fixes on the call line but the process is now formalized via the Help System Fix a Problem Troubleshooter.

While it is possible to get support without filing a “report a problem” first (by telling a little lie), Google has suggested that the problem is likely to be resolved more quickly if you file the report and only call if the issue has not been resolved in a week or so. I think that the reason for that is that the phone support person uses the same back end support infrastructure as the “Report a Problem” process.

To initiate a support call back select the troubleshooter: My listing has incorrect information, highlight the radio button for “Listing data, including title, address, phone, URL, “at a glance” terms, categories, hours, description, or coupons”, indicate yes to question as to whether you have reported a problem and click on the link to call us.

I am glad to see that, despite my initial skepticism, the call support system is being expanded to cover more problems.

Here is a screen shot of the My Listing Has Incorrect Information: 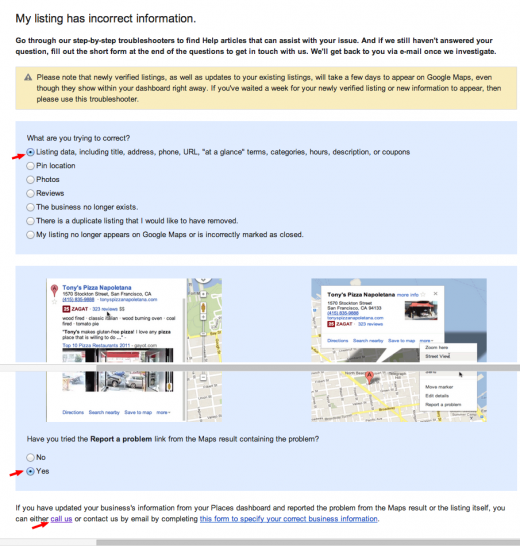 Mike- thanks for posting this. I am sure we all see this is another large step forward for Google Local. I will be interested in how the actually usability turns out.

And with that, Google is one step closer to making their local search offerings genuinely usable. Hopefully soon they’ll take even more of the guesswork out of managing listings.

Hi Mike. Good post. Next time I have a problem with Google I’ll keep your comments in mind. Hopefully it will help! Thanks

Mike,
Do you know if this new phone support will also work on verification issues with unmerged Google+ pages?

@Ted
Ah the complexity of semantics and Google’s atrocious naming schemes. It will work on any verified local listing whether it has been upgraded to a Social page or is still just Places dashboard based.

@mike
Thanks. That made my head hurt.

Should we all formally thank Apple for finally igniting a fire under Google’s proverbial rear-end. Funny what real competition can do for a business. OR could it have been your infamous train-wreck post that kicked them into action?

I think Google has been working on these issues for well over a year. The problem has been that they are rebuilding local from the ground up as well as from the top down.

We saw glimmerings of these changes as far back as late fall 2011….but when you are the Queen Mary it takes a long while to turn yourself around particularly when there are so many moving parts. Some of those parts could not really be implemented until fundamental changes were made in the whole system. We are just now seeing the beginnings of those changes.

I have not converted my old places page over to Google+ for a few reasons.

1. I have been and remain top 3 on all keywords.

2. I have lost half of my 30 reviews not doing anything (why take the chance of losing the others)

3. I am a SAB a abide by the guidelines not showing my address (tip from mike a few weeks back “delete your Google+ profile if you are a SAB”

I think waiting until all the bugs are worked out is the way to go!

Thanks for the tip Mike. I followed up on a local business listing that was difficult to index using the steps illustrated and actually got results on the first try (an escalation actually, but things are headed in the right direction nonetheless). Simple and easy process. Thanks again.

Where do they tell business owners that? I don’t think they do. Yes, I know to do that. But I really hope G spells out prominently and in a little more detail what the “protocol” is, or else the support folks will get maxed out and phone support will suck for everyone.

Not sure why they don’t offer this for duplicate-listing issues. That’s so intimately related to “data” problems. Maybe it’s on the way, though…

Where do they tell business owners that? I don’t think they do.

Phil, this is what you need me for. :). The real problem is the help and help files has never been properly contextualized for the SMB. It occurs all over hells creation and for an SMB to even find it is still more difficult than it should be.

I think you should try the phone call for a duplicate. The issue is that again it probably will go back to the same staffer in India or wherever these things are done that it would go to if you reported the problem AND take just as long to resolve.

I and other local-search obsessives need you for a lot more than that, Mike! 🙂

Personally, I just don’t see how hard it could be for Google to spell out the do’s and don’ts a little more in the troubleshooter. Not even talking about doing a better job of “educating” SMBs; just giving a little guidance to the ones who’ve chanced upon the troubleshooter and who are about to get on the phone.

At the moment I don’t have any clients with dupe problems at the moment. Oh drat! I guess the fun phone call will have to wait…

Its about time! Considering how critical these listings are to local businesses you would have thought Google would address the problems and provide real support.

I have personally helped many companies sort through the mayhem of Google maps listings and the many problems that arise. For those without expert help they lose revenue and even shut down. SMB’s have enough problems to deal with.

Hey Google Maps Team, get on the ball before ligation forces you to!

Thanks for updating us Mike. This is great news for us. I found that once I had a real person from Google helping through the Troubleshooter, they would help getting the complete listing correct. I don’t want to mention the name of the Google Help Team person that helped me out recently, but he was great.

After claiming and optimizing a Google+ Local page for clients, we train them how to use the Dashboard, make edits, get review, read the guidelines, etc. Included are instructions on how to use the troubleshooter. We will add the information you provided into our training. It’s so important that the business know where to go and what to do.

If the product was designed and programmed better with a much improved and helpful user interface there would be far fewer users needing to contact support.

@andrew
While I strongly agree with you that the design, UI and help systems are not up to the task we must assume that Google knows this.

What we don’t know is how many business seek support or need help as a percentage of the total number of businesses using the product.

One thing we can however infer is that Google must think that there is a strong reason to provide support now. Either they know that the product is getting better and will require less support or there is some economic reason why it makes sense.

I would posit that both are likely reasons. Google is a data driven company. They use that data to increase profits. (See Google and the double Dutch). I have to conclude that the same is going on here.

Thanks Mike, looks like Google hasn’t got to the rest of the world. USA only.

FYI the Mapmaker interface totally blows. What a confusing, ineffective, waste of my time. Maybe there is written instructions in a booklet somewhere on how to actually use this thing. 🙂

There is a new, simplified MapMaker interface being rolled out in Canada that makes editing directly into MapMaker much easier.

You can see this interface by finding the G+Local page for any Canadian business and selecting the “Report a Problem” link. It will take you to a simplified MapMaker front end.

and substitue the CID for your local business and you will gain access.

[…] a recent comment Jeffrey Manger noted that “FYI the Mapmaker interface totally blows. What a confusing, […]