Late yesterday, as you probably already  know by now, Google Maps for iOS appeared in the app store. The product includes, turn by turn directions, transit directions, traffic information, street view and the ability to sync your searches and directions with your desktop.

The early (and frequent) reviews are predominantly and overwhelmingly positive. The legitimate criticisms offered include: 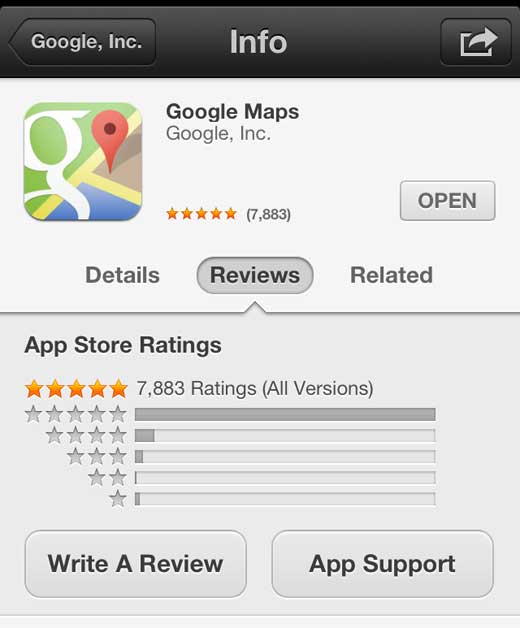 In my initial test, compared to iOS Maps, Google Maps is significantly faster at generating maps. Its ability to disambiguate and find locations is superior. And I assume that its database of places is better but I have yet to test that.

It does not however integrate with SIRI which from a car based “workflow” point of view is a huge drawback. Not necessarily Google’s fault but a typical use case for me is to ask SIRI about a location and from there get directions. It is mostly hands off and very easy. Speed of map generation is not as important as the convenience of getting directions in a mostly hands free way that is critical. All in all Google Maps appears to be a great mapping product.

Amazing what Apple had to do to get Google to provide turn by turn on the iPhone. One wonders though, even with the hoopla how many iPhone owners will take the time to download and use this product instead of Apple Maps or whether Apple Maps is “good enough”.

Since the latest version of Apple Maps has been something of a debacle, this app may be perfectly positioned to win the hearts of iOS users. Lack of integration with SIRI is a big problem. I wonder if that’ll be part of later updates.

@Chad
A debacle for sure but much of it a pile on PR disaster more than anything else. There were times in the not too distant past where Google was sending folks off mountain cliffs, down closed roads and losing towns. Apple has opened up SIRI but it is not clear whether the level of integration that Apple gets from SIRI & Maps will be there… Lets hope that Google keeps updating this and tries to add whatever it can to make it more hands free.

I’m going to D/L it today… for the turn by turn, and assess whether it’s better than my ($) TomTom app.

Just in time for the holiday season as many will be receiving a new phone / smartphone in 11-12 days, many for the first time. Staying top of mind (news) and on top of the download charts should solidify their position.
In fact, if you click on directions in their places listing on a Mobile, it takes you to a landing page which when tapped, takes you to the the app store…

Also, why do both the places and new app of a listing not include the introduction / about us that we see on desktops?

My quick read of the news is that the Google Maps app has received a very large number of downloads. Don’t have an Iphone so I don’t know.

Perspective is something. Remember how bad Google Maps was and for how long it was bad. In this blog, one of my last recollections of a fairly big “mistake” was a reference to an article how G Maps was giving bad directions on a major highway still under construction in Maryland. It was sort of major considering that a pretty large population of drivers could have been misdirected.

Google fixed it reasonably quickly at that time and faster than they used to fix things. And I know that was over a year ago…possibly 18 months ago.

Perspective suggests it takes a Looooooooooong time to get Maps to work reasonably well.

Seems like a smart move by Apple to get something up that works while they slog through a darned big project to get their own version up to snuff…..and who knows how long that might take.