Why I had to Take Chrome Off of My iPhone 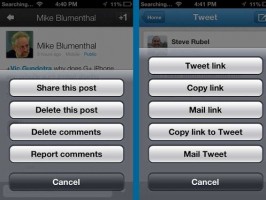 CNET writes that Chrome has gained a foothold in mobile but is a no show on the iPhone. Its not hard to understand why most users don’t give it a try but I went so far as to install it on my iPhone was forced to remove it. Not only did it not do what I hired my mobile browser to do – or rather what Apple taught me a mobile browser should do- which is to allow me to easily share web content, it inserted itself into Google products at inappropriate times and places. I was continually and inadvertently opening it from within Plus even when I didn’t want to.

I actually use and like the Google+ app on my iPhone with but one caveat – it doesn’t allow sharing to any other communication service; not Twitter, not Facebook, not Texting and not even email. What is social content for but for sharing? I read a lot and Google+ , Twitter and my feeds (I am probably the lone user of Google’s Currents iPhone app) have become a primary source for discovering interesting content. I share this reading with my wife via email, via text to my kids, to my peers via Twitter, etc. etc.

You get the picture. I share it. As should be done with social content. But the Google+ app only allows me to share a story to my Google+ circles. That is unless I open the content in Safari and then share it from there. Thus the sharing workflow on my iPhone was to find an article in Google+, open it in Safari where I might read it now or later and then share it from Safari to anyone and everyone that I thought would find it interesting.

The was until I installed the iPhone Chrome app. It inserted itself  in the Google+ app front and center just above Safari link. I would have left Chrome on my phone for research purposes and the occasional use but I kept inadvertently opening it when I wanted to open Safari. Even that would not have been a problem except… Chrome, like Google+, supports no social sharing.

I find Google+ to be a useful and valuable addition to my phone. It sits on the limited real estate of my front screen. Yet it, like Chrome, manages to disrespect a fundamental core feature set of the iPhone.  I often wonder how it is that Google, with such brilliant engineers, programmers and (now yes) designers manages to get it wrong.

Was it a business decision to limit sharing to Google only products? Or was it just an oversight?

I also think it was a business decision. Either way Google is more likely to add those features as the complaints and requests add up. When the cost of keeping people in the Googlesphere outweighs the cost of letting them go, we’ll see those features added.

I wonder if its genuinely a business decision, as it seems a perverse one to limit sharing specifically on the platform which has the least adoption of Chrome.

Is it related to the way in which you can change default apps for specific actions in Android but not iOS? There’s something in the back end of the Android OS that allows different ways of interacting with multiple third-party apps.

@ian
The ability to share data is apparently baked in on the iPhone as well.

Other Google apps do in fact allow real sharing although the magazine reader app Google Currents happens to add an advertisement for itself with each share.

Given that fact it would appear to not be a technical limit. That leaves either a business decision or some development priority.

Either way its friggin annoying.

I also think it’s a business decision and yet another example of Google wanting to control the whole social ecosystem. We already know that they need more activity on Google+ so this adds up.
And yes, they wil only change it if they receive a decent number of complaints, and even then, they will probably ignore it for a while.
I also really like the Google+ app despite these things, and the IPad Google+ is also very nice.