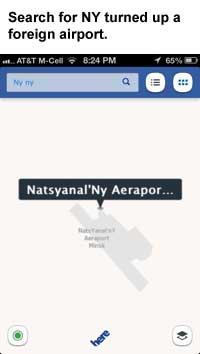 Nokia, with the help of Navteq, is a seasoned mapping company. Arguably they are in the top tier of digital mapping. Their new product, Nokia HERE Maps for the iPhone, should show Apple what good mapping is all about. It doesn’t. In fact basic interface issues prevent the product from being a serious contender in the iPhone navigation market. Apple can now proudly say that there is a mapping product for the iPhone that sucks more than theirs.

Visuals: When I read reviews online about it being blurry, slow, ugly and lacking turn by turn, I couldn’t believe that Nokia would put out an inferior product. Now is the time to strike while Apple is still recovering from their Maps fiasco and come out with a great product. I thought Apple fan boys were just ranting. I particularly could not understand a map that was blurry. But sure enough the maps are totally fuzzy, hard to read and annoying. The ONLY thing clear on the map was the “here” brand name. And as Andrew Shotland pointed out even that can be confusing in the context of a map.

Basic Interface Screw Ups: My first search was for 1 Riverside NY, NY. A search that both Apple Maps and Google Maps understands. Apparently Nokia HERE does not understand common abbreviations like NY for New York. When searching for NY it turned up a foreign airport who knows where. When I searched on SF, CA it turned up Santa Fe, New Mexico. Forcing users to type out every word on an iPhone is a big hurdle from the get go and not understanding common naming short cuts is a deal breaker.

Kludgey Interface: Generally the interface for anything other than basic directions is confusing. Certain tasks like looking up nearby business are totally opaque and often non functional. I searched for nearby Grocery stores and was shown a department store.

Business Listing Quality: As far as I can tell other than certain categories like food, entertainment and shopping these are missing altogether.

Routing: I do not live in a big city so my tests typically reflect testing a product’s familiarity with back roads and short cuts. I figure if the product can get these back country roads correct far away from urban centers then the chance of getting the more important stuff right is far higher. Apple and Google both gave me a choice of routes although Apple gave the better choices and in its current iteration, a better way to select the route. HERE offered no such options and offered no alternative routing. It was their route or the highway so to speak.

Things Nokia HERE Has: It does offer public transportation routes which Apple does not. For me that is not enough to get by the egregious interface issues. They also offer the option to save a map for offline use, although the many warnings and caveats were discouraging. A map can take up to 13 mbytes of storage.

Bottom Line: Don’t waste your time or bandwidth to download the product unless it is for a case study in the decline of Nokia as a force in the mobile world.

[…] being kind. However, I might not go quite as far as Mike Blumenthal who wrote this morning “Nokia HERE Maps Sucks (Significantly) More Than Apple Maps.” Blumenthal even critiques the underlying map data, which is supposed to be one of the […]

Walking routes are available on the Apple Maps.

@Rich
I should have known better but I held out hope that the product would set a standard for quality. I was wrong. Hard to understand how a “mapping company” can get it so wrong. Apple Maps looks great in comparison.

I have a couple of Canadian clients and using Nokia Prime Places is the only way to get correct information listed for them on Bing. Takes 6 weeks for a postcard too. I agree it’s absolutlely terrible. Can’t wait until it goes away, hopefully.

What do you expect. These guys paid $8bn+ for Navteq in 2007 and it is now worth maybe 1bn if they can find a buyer. 5 years later it is the same incompetence that drove the deal that is leading this group.

The search is useless, the places database is woeful, the UX makes Symbian seem reasonable and yet for year after year they have said it is about to improve and all they push is the offline capability and other largely irrelevant features. Elop will regret having kept the incompetence he inherited.

I guess I can’t use Nokia to find nearby bialy shops, can I?

If it can’t find NY it is going to have a darn hard time finding a bialy shop. 🙂

You may want to reevaluate your first search for “1 Riverside Drive NY, NY” this address is attributed to a rental property that lies at the intersection of W. 72nd Street and Riverside Drive according to an entry found on the real estate website Zillow.com. However, according to Google Maps, the address “1 Riverside Dr. New York, NY,” is located within the city’s largest bicycle and pedestrian pathway known as the Hudson River Greenway; approximately 4 blocks from the location provided by Zillow. In contrast, the address is accurately located at the aforementioned intersection within the “Nokia Here Maps,” application. (if this randomly selected address on a prominent street within one of the world’s largest and most important cities was inaccurate one can only imagine the number of inaccuracies present within many of the less-populated regions throughout not only the United States but the world)

These types of geographic inaccuracies plague the Google maps platform due to the company’s stubborn reliance on geographic data that is not locally verified by a field team, in particular a majority of this data originates from two main sources, the user-submitted edits through Google Mapmaker and data mining techniques in which Google uses advanced algorithms to garner geographic data from any digital source it can gain access too. This is in direct contrast to the data acquisition process favored by the Nokia mapping subsidy, Navteq, which has strategically built a geographic database over the last 20 years by employing a vast global team of cartographers that verify each edit and addition to the geographic database. It will be decades before Google can rival the amount of field verified geographic data held by Navteq and puts Nokia far ahead of Google in the digital mapping arena.

It’s strange, but I just installed this app on my Wife’s iPhone 4s to see what all the problems are. I don’t see them! “NY” brought up New York, as expected. When I clicked on Route, it happened in a couple seconds! Labels are Clear, not blurry, Directions are accurate. Again, I don’t see the issues mentioned in this article. I wonder if a bias is in play on this report? Just a thought… Maybe it’s YOUR iPhone?

The ONLY issue you brought up that I was able to verify is no turn by turn Voice Navigation. But for a FREE app on a competitor’s device, I don’t see that as a flaw.

@SS
I just checked and you are correct that they fixed the NY search. However they still have not fixed the SF CA search. I would suggest that it reflects a bigger problem in the way that they manage synonyms in their search.

Also there is no getting around the blurry maps and the confusing interface.

While I do admit to not being unbiased (the title sort of gives me away) I am not the only person to find significant fault with the product.

Ok, now that I’ve played with my wife’s iPhone 4s for a little while, I can, with 100% confidence, tell you what sucks the most.

Typing on the iPhone 4s keyboard! That thing is Awful!!!! It’s so hard to hit what you are aiming for! Seriously!!! I mean REALLY bad!!! Wow, iPhone users have no idea what they are missing…

And of course the update is that BMW, Daimler, and Audi bought this lousy product and team last fall for $3.1B. http://www.cnbc.com/2015/08/04/the-reason-german-carmakers-bought-nokias-map-unit-google.html

We were trying to submit location data to the HERE team for months. After some initial interest, they never even provided a data template. Just a lot of incompetence.

Executive summary: if you’re renting a self-driving car in 2025, you might want to avoid German makes…

As a former employee in HERE. Here map is very lousy! like the crap management team, those pigs will eventually turning the company down. Go google Go Tom Tom! no more here.