Ed Parsons: 1 in 3 Searches at Google are Local

Ed Parsons, the Geospatial Technologist of Google,  has indicated in a recent talk at Google PinPoint London 2012 that “about 1 in 3 of queries that people just type into a standard Google search bar are about places, they are about finding out information about locations. …this isn’t Google Maps just people normally looking at Google”.

The number of searches with local intent at Google has long been a topic of interest to marketers, directories and SEOs. In December of 2010, Google indicated that searches with local intent were 1 in 5 of all searches. Recent research by Chitka indicated that the number was closer to 1 in 4. Ed Parson, who should know, says that the number is 1 in 3. Based on Comscore’s September Core Searches that puts the total number of Google searches with some local intent is in the ballpark of 3.6 billion searches a month. Clearly not all of those show pinned results. It is not clear from Parson’t talk but it would appear that the 1 in 3 number applies to the desktop. If one were to then include mobile the % would obviously be higher. 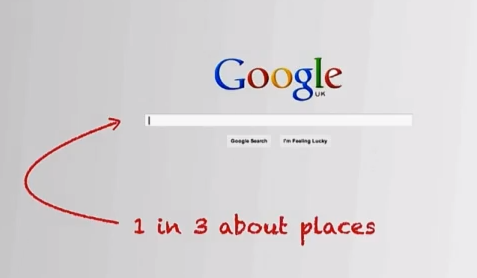 Yesterday afteroon, I put this question to Ed Parsons on Google Plus to get a better understanding:

I was wondering if you add some detail to your quote at about 2:16 where you said: “about 1 in 3 of queries that people just type into a standard Google search bar are about places, they are about finding out information about locations. …this isn’t Google Maps just people normally looking at Google”

Is that both desktop and mobile? What percentage are Map/Driving direction related? What are the other categories of query types?

It’s a composite figure both Mobile and Web, we don’t have an exact number but it’s between 30-40% – These also [are] not always [as] explicit [as] ‘Find me a pizza restaurant in Chelsea’, a more generic search request say for Football Teams would be framed geographically to highlight teams local to the individual searching..

This answer validates David Mihm’s logic in his post 20% Local Intent Number Is 50% Too Low where he put 30% as the lower boundary for searches with local intent at Google.

Here is the complete video. The comment about local search volume occurred at 2:15 of the video:

1 in 3 sounds quite “optimistic” to me. It just sounds like too many to me. But I’m no more informed than the average searcher.

Do you think this only includes search terms that include geomodifiers are just any term like “tires”….that could have local intent but could also not have any local intent.

I think it includes every search that google has reason to believe has local intent and is in search of a place. It could be “statue of liberty”, directions from A to Z, car dealer with or without a geo modifier.

Sound reasonable to me. More and more generic keywords shows local listings and most mobile search terms are local in nature.

Not only should google pay you for doing their work, they should pay you 50-60% more than what was the going rate.

I’d like to hear from high googler’s on this issue!!!

Parson is one of the highest….

That number is probably scaring the bigwigs at Google immensely. They are leaving so much money and quality on the table with Local that I am surprised more heads have not rolled. No wonder Marissa Myer jumped ship.

I’m really interested in this notion of place – specifically local geography – and Google (and the internet as a whole). This piece serves as a great reminder that a much of what people use Google for has to do with concrete information and region-specific locations and events, all despite the assumed unity and anonymity of the Web. It makes me think about the effects of physical geography on the internet as a non-physical place. Will there be region-specific filters for Google users in different places? Thanks for the great information.

I’m not sure if this is what you mean, but Google already modifies its search results based on your geographical location. Anything that it deems to be a “local search” is skewed to your physical location. And, indeed, if you are logged into your google account, your prior history will affect your search results. Region-specific filters are already in place.