The PlusBox is now once again being seen more widely in the search results. When Google strated manipulating local search results by reducing their footprint and removing the description several weeks ago, the PlusBox feature appeared with increasing frequency. I have received a number of emails alerting me to the “new feature” so I assume that many of you are not familiar with it.

The PlusBox is a local interface convention first introduced into the main search results in December of 2006. It really was the first “blended result” and it essentially added geo information and an optional map to an organic search result. Even though Matt Cutts indicated at the time that its data could come from the Places Dashboard (then known as the Local Business Center), it was typically algo generated and frequently showed erroneous information that was difficult to fix.

Bill Slawski first covered the PlusBox patent application in 2007 (and again in 2011) and it was a fairly common feature at the time. As Google pushed more 7-packs and then the Blended Places results into the main search results, the PlusBox was rarely seen over the past 2 years.

In many ways, the “new” PlusBox display is preferable to the new “no description” local display and begs the question whether a business owner can “do something” to cause its appearance instead of the currently sparse local result. The answer: I don’t know.

The PlusBox has always gotten its geo clues from a range of sources but it often appeared to be most influenced by website associated with a geo location rather than the Places Dashboard. It makes sense, if you want it to show, to be sure that your site gives the Google bots as many geo signals (kml files, rich snippet address formatting, location specific pages, geo rich contact us and about us pages, claimed listing) as possible. If I were a betting man, I would put my money on a KML file and geositemap as a very trusted signal but there are likely multiple signals that Google can use to generate the result.

As you can see from this screen capture, it has benefit of showing a longer title tag, a robust meta description and an address. Its reappearance highlights the importance of a well crafted description tag that possibly includes the phone number.

Obviously Google Local universal results are in a great deal of flux. Changes have been occurring on a regular basis of late and the only normal seems to be change. The reappearance of the PlusBox is just one change amongst many and who knows if it will last. The integration of search and social has just begun and this may end up just being a way station rather than a destination. That being said, it always makes sense to have a website that uses best local practices and clearly signals the Google machine where you are located. 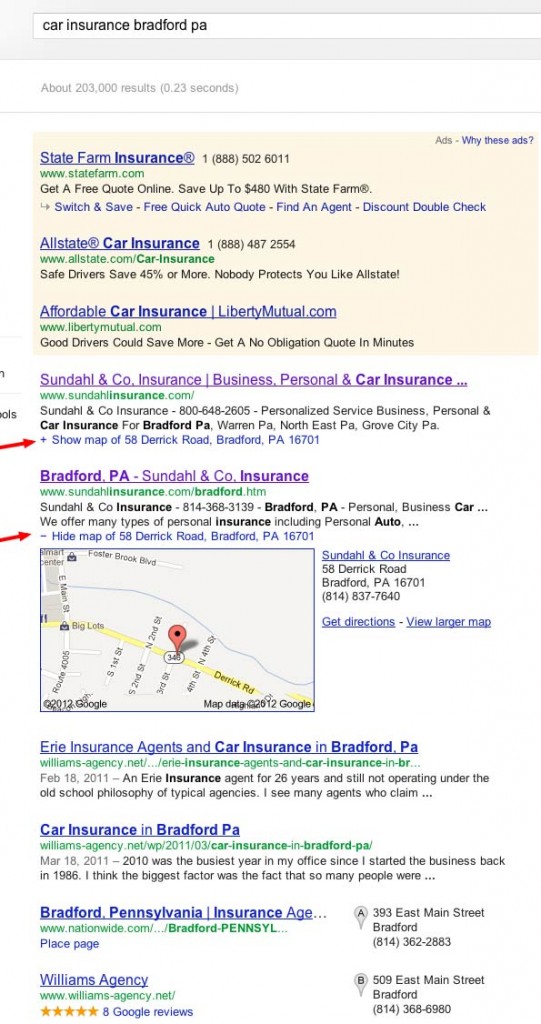 I for one have always been a fan of the plus box with the address. I find from a user standpoint that it works well.

@Mark
Yes I too really like the UI but…..

2)It isn’t clear how it performs next to pinned results.

3)Do we need one more UI convention? Christ, google, pick one, make it simple and stick with it!

+ boxes are a stroll down memory lane in conjunction with problems at Google Places. You gave an excellent review of ways to reference location within the site. Let me add ones that adversely affected sites in the past with erroneous address information showing via + boxes.

Clean your site of references to old addresses. Specifically larger institutions, hospitals, schools, places with nearby multiple addresses, businesses or institutions that lease/buy in multiple properties within a region.

In the past there were Google Maps/Google Places/+box errors showing for addresses when Google replaced current information with obscure older information buried on larger websites representing bigger websites with many pages for a larger institution.

I’d go through the whole danged websites and purge any old address information. We found some very obscure address information in the past that was crazily the source for erroneous +box addresses despite more obvious clear signals.

+Boxes that is a trip down Places Purgatory: 😀

I’ve just encountered this + box for the first time today when I noticed a competing website had said + box and I was pretty irked by it. I think as someone said earlier from a users point of view it’s very useful.

The places merry go round is getting pretty irksome with change being the only constant as you say. I have spent a lot of effort and time attempting to get Google to notice my locations, but what happens if you have more than one location.

The site I am attempting to rank in the Google Places results has three locations and so three different geo tagging locations. Will this confuse poor Google? am I better offer going for one location on the main site to one Place page. Then associating the other Places pages to locations on satellite sites or something.

The problem then is for the poor old site visitors who want to find each location, which, by the way are very close to each other – within two miles or less.

I have the plusbox on my company’s website search engine result. The address isn’t listed one any page within my website, but it is listed in Google Places and other directories. The address they are displaying isn’t correct, we have moved since. Maybe this will be a good test to see what I need to change for it to reflect properly on the website.

If 197 Horn is the wrong address then Google has it from a lot of sources.

[…] that started in late January had significant impact on Google local search results. We saw an increase in the display of the PlusBox, an increased search display of Blended results, reduced display of […]

[…] that Joy is showing of the before and after, what I think we are seeing is a new more obvious Plus Box display. These typically will use reliable web based address information but it need not be rich snippet in […]