Mathew Hunt  of Small Business Coach pointed out that, starting last night, the meta description snippet associated with Blended results is missing in action. They came and went in my results this morning and are now gone again. Obviously things are flakey and who knows where they will end up. I have also obesrved the reemergence of more of the blended 7 results instead of the four that have been common over the past few weeks.

He also noted the more common appearance of the Plus Box. The Plus Box, despite it not having been seen that much over the past year, was actually first released in December of 2006 and has appeared periodically associated with organic web search results. However since the reduced footprint occurred several weeks ago the Plus Box has become more frequently displayed. 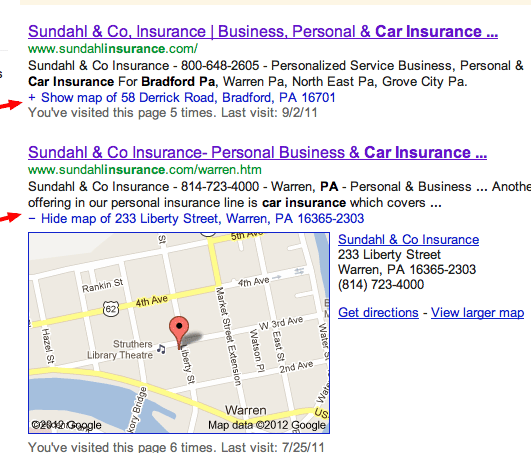 Mike–in light of this, and the advent of the side by side pin listing, do you have a revised recommendation on length and structure for both title and description? (apologies if you’ve written about this already and I missed it.)

For the 7 box versus 4 box we are noting that the smaller results are showing for categories/ cities where there are a lot of spam listings. We have been working one of our clients, a carpet cleaning company, after a huge onslaught of bogus listings. The Google India team performed their sweep, really messed everything up, and now we are down to a 4 box. 2 of the 4 listings are still complete fakes so it will be interesting to see how this all plays out.

Thanks for the mention.

Yeah seeing that + local box everwhere now. Never seen it much before. Not sure I like it.

Never a dull day in local.

@Mathew
Its come and gone over the years, you are just too young to remember. 🙂

Could be that Google doesn’t trust the results and thus is showing less. When it comes to why they show or don’t local or blended or why they show 4 or 5 or 7 or 3 is always opaque. I just figure it is the acts of the god and respond as best I can.

@Peter
You are referring to Web Page Title and Description?

@Mike
Yes, it looks like meta Titles in a side by side pin result get truncated at around 40 characters. Wondering if you or others are recommending, therefore, a change to the old 70/156 rule of thumb? Or possibly a reordering of the Keyword | Brand | Geo style that seems to be so popular?

I don’t think this affects total length. As to what you put first and second it is a matter of very spirited opinion. I have always held that Brand is important to both Google and the local search so I always try to do Brand | Keyword | Local.

@Mike
Gotcha. Interesting to think about if, in fact, descriptions are going away and all that remains visible is 40 characters of title, a url, Places reviews and the pin. Certainly would seem to even further amp up the importance of the stars/reviews summary.

[…] it seems that the missing Places description noted first by Mathew Hunt yesterday is the new normal at least for a day or two. The Places […]

I had the plus box appear for a site I maintain – but the address is not anywhere on the website and the website is not associated with any local listing. Does anyone have an idea of how Google found the address?

@Marie
From a trusted data source (Infogrid, Localeze, CityGrid, MapMaker etc) or eleswhere on the internet.

@Mike
The only place that the site is associated to an address is in GoDaddy using the WHOIS feature (the registrants address)…it’s crazy to think that Google would use this to link the site to this particular location.

What is the business name, phone and address?

Have you searched in Google’s index on something like ‘”business name” phone number’ to see what other resources Google is looking at?

In the end, they see a lot and if you do the above search you can get an idea where the information has spread to.

Google is a registrar and knows that information but they are likely to have seen it elsewhere as well.