The Foibles & Fallacies Of Place Based Bubble Ads

Should every place & business that exists in our everyday life be used to sell against? Should that specific, very real entity with its history of sentiment and purpose be leveraged to shill for something without their knowledge? And if so what is appropriate to sell against that place? I asked myself those questions as I explored some of the “bubble ads” that Google was showing in the info bubble for these Places.

When Google Adwords are shown against a full page of search results based on relevancy and various matching types some of the quirks of the system are not obvious. However when an algo tries to position one ad against a single Place that exists in reality, the limits of an algo based placement become more obvious. The lack of upfront human curation creates unpredictiable and oftimes odd outcomes. The results can easily pass from the mundane into tasteless very quickly.

The issue certainly affects small business as they find their competitors,  both local and national, advertising against their good name. In this slide show you will see Google leveraging David Mihm and Andrew Shotland‘s reputation to highlight their own Adwords product as an alternative to either’s service (yea right).

There is humor as well as you see the Obama campaign selling against the Whitehouse with a desire to live there another 4 years. The Yellowpages selling against a church certainly strikes an odd note. But that same humor turns black when you see abortion ads positioned against a Women’s Homeless Shelter or Health Clinic.

Obviously when the level of granularity gets down to the local business or place the foibles of this sort of advertising becomes painfully obvious. It reminds us all that we now live in a culture where every thing is for sale and every white space is ripe for an ad placement. Google’s info bubble ads that are now cluttering Google Maps give Maps the feel of those “park benches” that sit at smogged covered street corners with ads on their backs and facing into traffic. These effectively become the grafiti of our virtual world only they  are not painted by rebel outsiders and they are paid for with real dollars. The ads manage to remind us that all too often the value of humanity has been reduced to the value of the individuals’ “eyeballs” and their willingness to read the message.

Google has taken a technology that not that long ago reminded us of the wonder of online possibilities and defaced it in a way that has smacks of the billboards and signs that frequently cover the walls of public spaces and bombard our senses with commercial messaging at every turn. The only thing missing from Maps to complete its drive to mirror reality are the whiffs of the urine that cover these same walls. Although I don’t doubt that Google would ad scents if there was a way to monetize them.

Obviously not all of you agree with my disdain for Google’s new efforts. But all of you can find the humor and spot the tasteless gaffs of this advertising method. If you find a particularly ironic, distasteful or inappropriate “Bubble Ad” kindly send along a screenshot for my “Rogues Gallery of Bad Bubble Ads”. 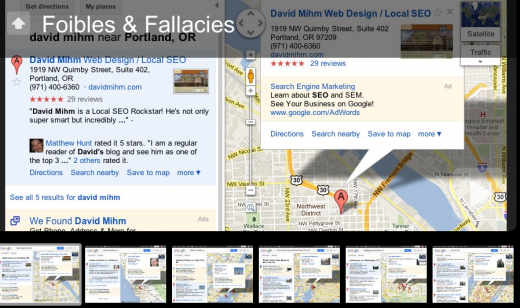 I take a more business approach to this new change. I also acknowledge that it is an affront the concept of your places page, which includes the “bubble” that now carries ads.

The hypocrisy is that Google is out there aggressively trying to get SMB’s to claim their google pages and build them. Of course by doing that it gives google one more gmail account, one more contact, one more effort to try and get some direct advertising money from them via adwords, adwords express and a growing number of sources.

So its a visual affront to look at your branded page that google urged you to claim….and see someone else’s ad there.

So much for claiming “your page”. Its Googles page and always has been. This is the ugly truth in stark adwords dollars.

Meanwhile I see very little traffic in this direction. For every business I work on discovery searches are more important than recovery searches, and of all the visits a stark minority go to the places page.

I use adwords for every account. Adwords generates much more traffic than visits to the places page for every business. In all cases we spend fairly aggressively. In many cases we rank first for a phrase…but not in all cases.

Now here is the tricky thing with adwords and something that could occur with regard to these ads.

In my limited searching so far, it appears that the ad that falls under a bubble in your map on your places page is the first ranked and quite possibly the ad representing the advertiser paying the most. Yes Quality concerns for ads could be part of the package that impacts whose ad falls in your bubble but clearly bid price has a big part of it.

Now do I want some SOB competitor showing in my bubble???

HELL NO. (actually that is theory–I’m going to work through this differently)

That could be the reaction of a lot of businesses as they get wind of this. If so….well you could get a chain reaction of bids….to the extent that various advertisers become aware of it.

Frankly, while I’m adding to the conversation about this I don’t think I’ll say I’ll add other writings as I don’t feel like being a shill for google advertising…at least not this version.

There is something else about “branded searches”. I personally discovered this after running a ReachLocal (ugh= ripoff in my opinion) and reviewing a Yodle (=another rip off) wherein the resellers tape calls that hit their ads that show redirected phone numbers. I’m also not the only one who noticed this phenomena about “branded searches”. Do a google search for ReachLocal Reviews or Yodle reviews and you will see a LOT of other businesses that discovered the same thing.

A lot of searchers are looking for your phone number. They may not be potential customers at all. They are existing customers, sales people, etc etc. They found the ads with your business name on RL or Yodle call the redirect phone number and are taped trying to sell you something or calling you about service or some other issue totally not connected to sales.

Again go to the pages about reviews of Yodle or RL and you will see a lot of unhappy people with those adwords resellers with lots of complaints including that particular issue.

As for me and my accounts I’m going to look at the branded results for our businesses and the competitors and then make individual decisions. The decisions will be based on overall spend, the effectiveness of the spend and not based on whether our ad shows in our bubble or not or does a direct competitor’s ad show.

Greg Sterling’s comment that Google might charge one to erase a competitive ad from showing in your bubble is something that has been in play for years. More recently I took calls from Yelp salespeople referencing that as part of the aggressive sales pitch.

Simply I hope the appearance of these ads doesn’t unleash a cavalcade of new ppc spending…..especially by those businesses whom we direct compete against.

Yes it is bad taste, yes some of the ads strain credibility in the framework of where they show. Still I wonder if this won’t work to push spends up on the google bid system.

I think most businesses will react exactly as you note with an emotional response to the appearance of competitor ads on their bubble… and buy an ad regardless of the real value of it.

In the end, I see this as a Google win and a loss for most SMBs and society in general.

For some reason I find this case less offensive than when they were advertising on my name in web results. At least this is clearly my BUSINESS rather than my individual person.

@David
I am not sure your case is particularly egregious either.

That being said, when a small florist has a 10% off offer from Teleflora or a locally owned hotel has an ad for a deal from Orbitz or a bookstore has an Amazon ad on it things start getting less clear.

As Google starts making money off the Statue of Liberty or the 9/11 Memorial it moves to all new ground of bad taste. An abortion ad against a Women’s Shelter is in another universe.

I find that their algo is incapable of understanding what is appropriate and what isn’t. The results become not just irrelevant but offensive.

For some reason, I cannot get the screenshot slideshow to work 🙁

But your observations just fill me with gloom.

Here is a non flash version of the slide show perhaps that will help.

Your feedback would be welcome.

Thanks, Mike! That worked 🙂

Unbelievable! I’d be spitting feathers if I were David or Andrew. And as to the abortion ads – just so inappropriate 🙁

As you say, this is when it really gets brought home that Google is a machine and doesn’t have the social niceties or aesthetic judgement of a human.

As David pointed out he did not find it as offensive as the last time but I have seen local florists with ads from the large telemarketers attached, local computer repair with ads from Staples and ads for local hotels with Orbitz ads attached.

The machine, while it may have a sense of unintentional humor, does in fact lack a great deal of subtlety.

It would appear that these ads would be the “big changes” alluded-to a short while back by some Google Ads sales reps (http://www.nodalbits.com/bits/google-maps-changes-could-involve-google-plus/ ).

The bubble ads seem particularly bad, and they seem very counter to Google’s general philosophy of trying to make advertising more palatable to consumers by making it relevant. These ads may be ostensibly relevant based upon category or unfocused location, but they veer much more towards the user-experience-killing interstitial ads which annoy consumers so much — those ads take up too much map room, obscuring the real information sought by the consumer, and they will be perceived as having nothing to do with the place the info bubble should be all about.

From a consumer perspective, these will look more spammy than nearly anything Google has ever done before!

I’m suspecting the ads will actually not be all that beneficial for most advertisers, either.

[…] info bubble/tooltip that appears above pinpointed locations in the map interface. Mike Blumenthal points these out with a “rogue’s gallery” of inappropriate ad […]

[…] Google Places Ads- Tags, Boost – Mike – 10:46 am Awareness of Google’s new, aggressive & annoying Bubble ads have been creeping into the SMBs field of vision since their introduction […]