My grandfather was born and bred on the lower East Side of New York City in the early 1900s. He moved to upstate NY after WWII to join my father in business.The subtleties of gentile conversation that was the norm in rural NYS were largely lost on my grandfather. He was a large, loving, lovable direct man but one who spoke with the frankness of having grown up on the streets of NYC. At one time or another he had been scrambling to make a living having as a merchant, a fruit vendor with a cart and a taxi cab driver. I envied his ability to literally cut heavy wrapping twine with his bear hands (a skill I never was able to master).

Once in the mid 60’s, when I was probably in 8th grade, he was giving me a ride home from work. We saw a classmate of mine standing on the curb waiting for a ride. As was the style at the time, she was wearing a short skirt, fishnet stockings and perhaps a bit too much make up. He gruffly noted that she looked like a 2 bit hooker. I recognized that my grandfather was not current with the style of the times but his point, that she appeared inappropriately tawdry and cheap, was heartfelt. Nothing I could say would change his mind. Was he just out of date or did he have a valid point of view?

At the time I was shocked at his “provincial” assessment but have come to think him more right than wrong. Certainly the need for women to dress in the ever changing fashions of the day, particularly ones that objectify them as sex toys, could be considered a less than ideal aspect of our commercial culture.

It is a conversation that I have never forgotten and one that comes to mind as I look at Google’s on-going hotel booking experiment on the main search results pages. Literally every item above the fold is either an ad or has the booking option attached to the result. Google experiences the demands of every corporation to increase their income but exactly when does commercialization of the front page pass from tasteful to tawdry? 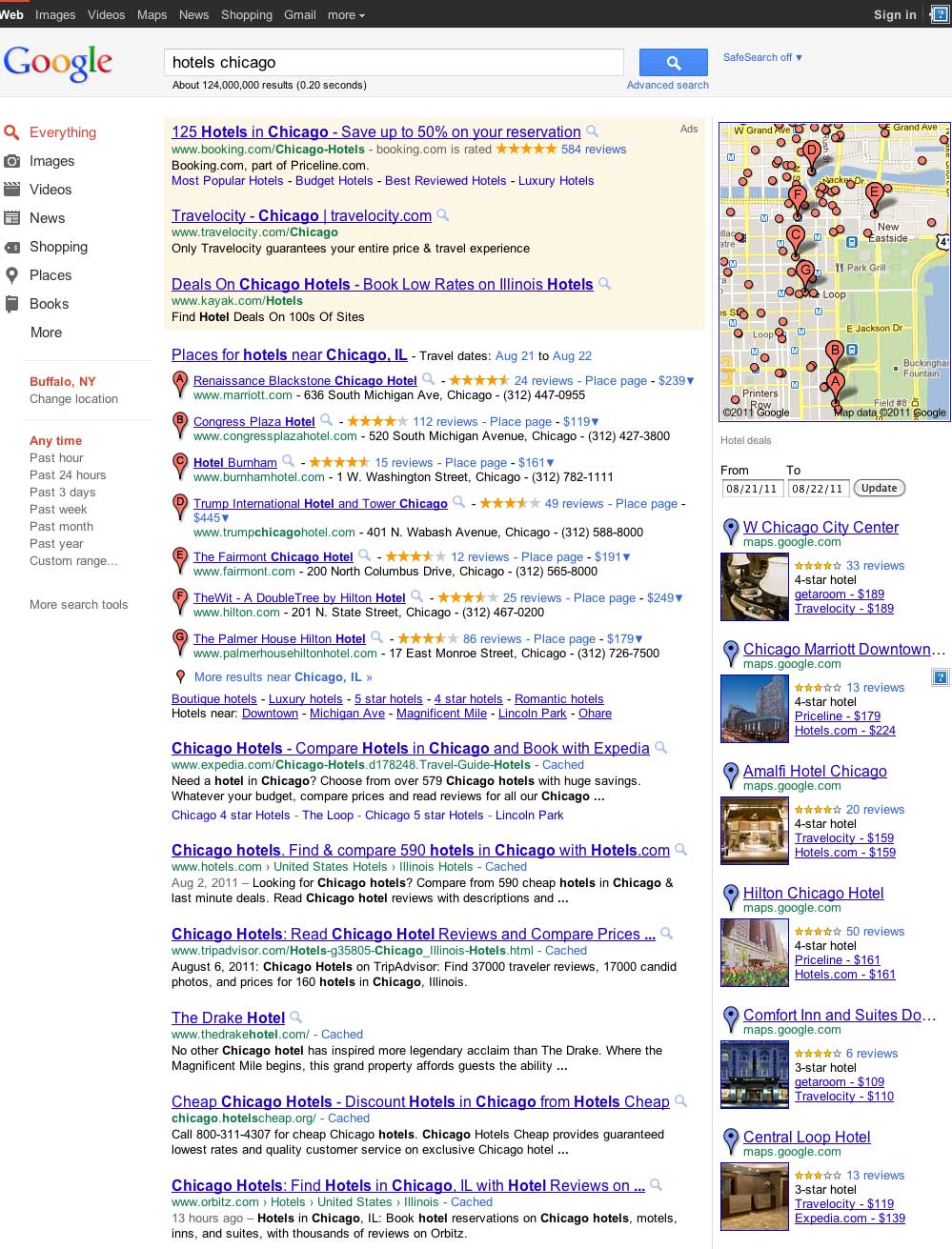 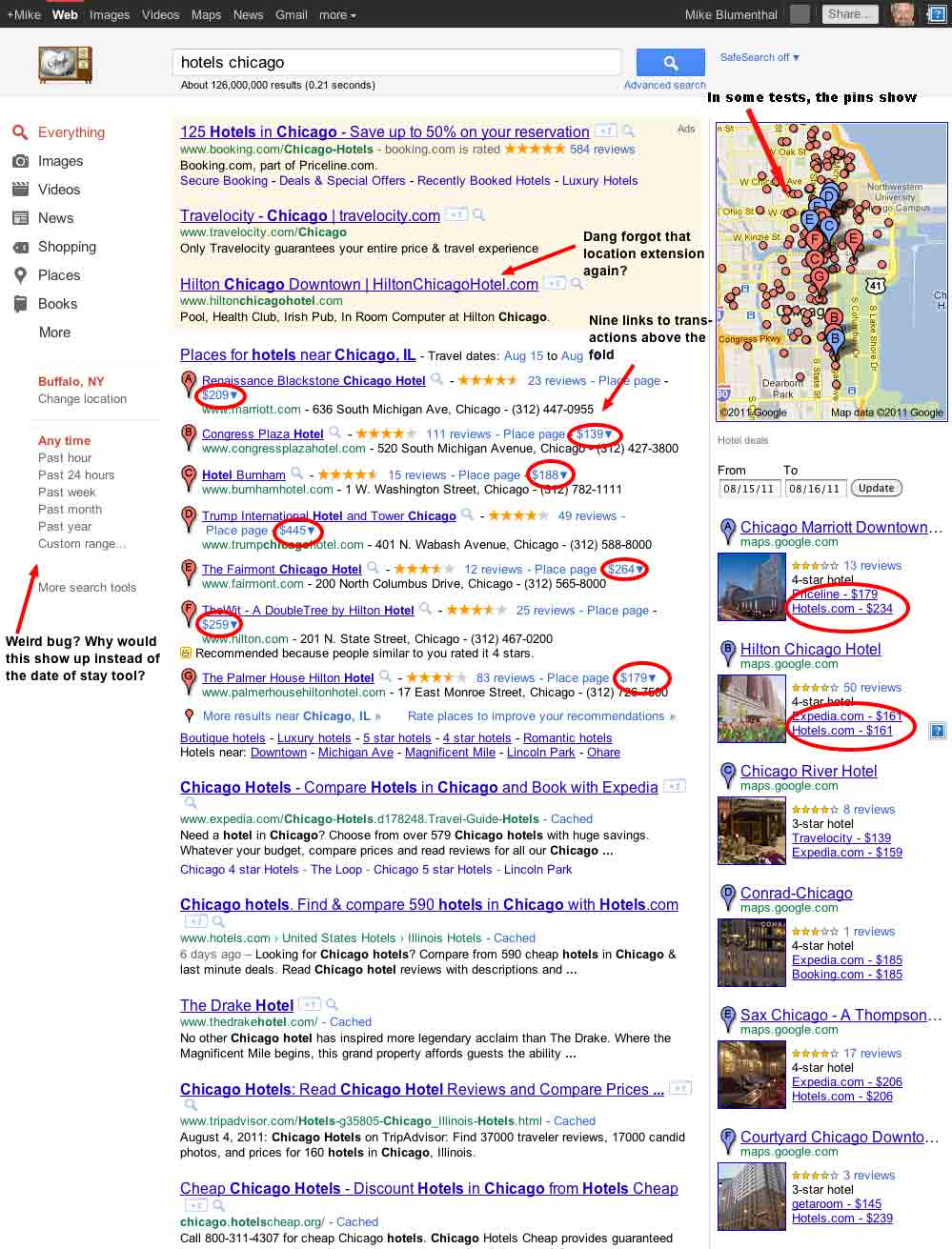 a quick search on g.ca for “hotels toronto” shows much the same – but I did note that the date of stay is present, the 7-Pack with it’s prices looks the same tho…

and…it drives home the phrase “above the fold” for us marketers doesn’t it!

You should create a Google doodle with the “L” as a fishnet leg!

last week we noticed the hotels showing up on a query for apartments for rent. Yes a previous search in the session was for a hotel but this session based broad match made the SERP even more tawdry.

Mike great article… seems you are moving towards my side of the logic regarding the future of Google. In an effort to continually grow profits Google will “whore” their search results. At some point this will hurt the user experience and force people to go somewhere else. Until that time comes we just have to live with Google in fishnets.

Doesn’t it make sense from a usability and consumer standpoint to provide a quick and easy way to see whats available at what cost? I guess “quick and easy” goes hand-in-hand with “cheap and tawdry”, but having played around with the whole booking feature a bit, I actually really like the dropdown information it provides (especially the inclusion of taxes).

@Dave
Certainly if these are to work, they need to be precisely targeted

@Mark
Google has several ways of increasing their ad based income
– Get more viewers
– Have them spend more time on site
– Increase the relevance of the ads to increase clickthrus
– raise prices
– show more ads and more types of ads in more places
Clearly they are and will be under stock holder pressure to increase their income. For Google it will be a continual balancing act but I do think you are right that the balance will come down more and more on the side of fishnets….

@Curtis
Yes it could very well…. that I presume is why they are testing… that is also why I asked the question… I am of two minds about it. Since I don’t have access to Google data set, it is difficult for me to make a conclusive assessment of its value to the searcher.