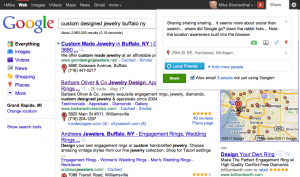 I have been playing with Google+, Google’s new social network and I am impressed. Not by the fact that it is a decent social product, which it is, but by the fact that with it, Google has managed to add a social layer to all of their products in one fell swoop in a way that could very well ease the way to broader adoption by the many users of their search products.

By integrating the product into the immediacy of search, it will be a quick way to create an easily segmented stream amongst the many folks that are already in your mail address book. In doing so Google may be able to overcome the real barrier to starting a new social network, the fatigue from having to assemble yet another collection of acquantances with whom to share.

It is a product that, while not an immediate threat to Facebook, is an immediate threat to Twitter. It takes the basic idea of Twitter, enhances it with easy to create subsets of your contacts and puts it front and center in your search experience. That is a very powerful place to be, one which gets millions of users every day. Twitter, which is just starting to see broad mainstream adoption, will now have to not only with deal convincing people to use their product but getting them to even come and look. If someone is going to add a second social network, and many won’t, will they not just make the “easy” choice and stay at Google?

Facebook and Twitter have been slow to build out their Places presence and have failed to offer significant value to the local merchant. Places is already there. When you add a functioning social layer that is readily available and ever present Google may actually be the first to offer a social local product at very large scale.

Calling a product decent may seem to be damming it with faint praise. It is hard to get too excited about another social product for me and I am sure for many others. That being said, Google seems committed to this product and appears to be going for broke in positioning it as equally important as their search and local products. In doing so they gain immediate mind share and hopefully for them an easier transition for users into the world of Google social. Google has to hope that the the new interface, jarring to some long term users (I find it ok and assume I will adapt) of Google, won’t push many users to try Bing and will attract enough social participants for them to compete effectively with Twitter short haul and Facebook over the long term. Its success will be dictated by the way and the speed that it is rolled out to the great mainstream of Google users.

@Mike…while I didn’t get an invite 🙁 I have read as many blog pieces as I can on same….

and it appears that even tho the jury is still out on the ratings of same overall…..I’d surely like to see it do okay.

FB is fine….but competition among many makes for better products….so I hope that it flies!

I saw the Interactive Tour of the Project & tried to join it but without any success. Probably in 2 years it’ll come to Israel too 😉

I’m impressed as well, that’s for sure!
Do you think that (oops) they did it again?

I do think that they may have done it again…. the first bench mark will be whether they piss people off with the new interface. If that flies and they retain their search customers then the step of integrating Google+ will be relatively easy…. so step one, happening today, seems to me a mostly positive change that most will adapt to quickly..

From their integrating it with the front page of search will be trivial…. the hard part will be getting significant long term traction… if they fail at this it will be a huge fail… I think thought that unlike buzz, they are going about it the right way…. we shall see.

@Mike…what I wonder is whether or not this will be a global or a continental rollout….or as usual….US via .com only at first, followed by .uk and .de etc…and .ca near the tail end….

but I’ll wait and see, I’d suppose….just wish I could’a signed up for the test is all…

Facebook and Google have the chips to play the bully all-in game, it’ll be interesting to watch how the trends play out for the other players.

All for the competition with FB, as mentioned in a previous comment – it will only improve the environment for all of us.

Thank you for sharing the expert info!

The real game, in the end, will be Local… that is where the commerce is and that is where the future massive monetization will occur. Both FB and Twitter have bumbled badly on that front… Google has a compelling technical and data advantage in that area…. when you layer a functioning social layer over it… it could lead to huge gains for them. Imagine Offers or CheckIn Offers in the context of a powerful, truly local social network… the game is indeed afoot.

I’m looking forward to trying this out. Personally, I am not excited by yet another social network either, but I like the concept of Circles.

This really is just an extension, or layer, over their existing products. Not seeing a major innovation here. Still waiting on Web 3.0.

Sorry to be late to the party, but was gone yesterday, so am just trying to catch up with all these changes.

Mike said: “it will be an a quick way to create an easily segmented stream amongst the many folks that are already in your mail address book.”

So the social layer revolves around all your Gmail contacts???

What about people like me who don’t use Gmail and have no contacts there? All the contacts I interact with are on Twitter. I have lots of followers and “contacts” on FB and LI, but don’t actively use those social platforms much.

I think I saw Matt or someone on Twitter ask a similar Q. How do we tie together all our contacts into this giant social web if we don’t use Gmail? Or am I missing something?

Meant to add, the obvious solution would be a way to import your Twitter and FB contacts. Is there anything like that?

I agree, no Web 3 here … but they don’t need Web 3 to rake in huge potential moneys in Local Social search…. they just need a functioning, competitive social product…

@Linda
You have hit upon one of the huge barriers to adoption…. who the heck wants ONE more completely separate social milieu no matter how well organized… and as far as I can tell there is no way to import Twitter users…..

By the same token why would Twitter allow google to import them. Clearly Twitter is in Google sights at the moment… they need to overtake them before they have a shot at the gold mine that is local social and FB…

Where does that leave Groupon long haul?

Mike, although I agree with what you are saying, I think the name they chose “Google+” will be some what confusing to users. Especially after launching “+1”.

One thing for sure Google+ will really “raise the bar” for any competing YP-type online local biz directory services.

@John S
I definitely agree that the naming conventions are a bit confusing and that may lead to confusion although good integration and UI design within + should overcome the marketing/naming issue. Some of the confusion is only amongst us, the marketers because we pay so much attention and the fact that they brought out Google+1 before they brought out Google+. If you assume that the naming is not a stupid mistake but the efforts of rational adults you have to wonder what Google+2 is all about. 🙂 Google+1 would seem much more sensible if it had come out after Google+.

I totally agree with you on the YP front… Google uses Maps to project Local and local to project Maps past Yahoo and Mapquest… Now they are using Local + Social and Social + Search to try to do the same thing to Facebook + Twitter… a much steeper hill for sure.

About the fight against Twitter & FB, i think that users are not loyal. Sure, it’ll be a battle till the last giant standing & the one that will be the most cool, easiest to use, encompass as many services & solutions (flexible, big platform) possible, in a simple matter with a nice UI will be the one that will win.

Google didn’t invent search, but they # 1. it seems that they are going with full force about the + Project plus they have a lot of air in their lungs to take this deep dive.

you had better circle me by the end of the day Mike or I might start thinking I am getting the Aaron treatment. 😉

Hey, Mike, nice insight on the Local factor of Google Plus..

It looks very clear that Google is heavily focusing on the Local Thing.

Just like the Long Tail in the organic seo is 100 times more focused, the Local results & information is far more effective in terms of user engagement.

I am still waiting for my invite for Google Plus.

[…] University it became clear that big changes were going on at Google with an interface upgrade AND Google+. Jeff Huber, Google VP of Local and commerce, kept leaving juicy comments on my blog and I just […]

this is great! can’t wait see first hand how Google plans to revamp social and search. do you know of a good place where i can see screen shots of what our profile pages are going to look like or the layout of the home “news feed”?

Mike, I must say that you have an interesting take here regarding Google+ constituting an imminent threat to Twitter but not Facebook. That is the exact opposite of everything I’ve been reading everywhere else on the web, yet it seems to make a lot of sense.

I’ve been hesitant to take on Google+, but now I fear I may have to as I don’t like Twitter, and from all the buzz I’ve been reading it seems like a no-brainer for small businesses to learn G+ and get good at it.

BTW, I just found your blog a few days ago, but so far I’ve been very impressed.

One question: Is Mike the author the same Mike as Mike the commenter?

Yes Mike the author is Mike the commenter and I am both depending on my mood.

The decision to take on another social network needs to be based in the reality of your business. Right now neither Twitter NOR Google + will have much impact on most small businesses.

But I think that long haul, Google+ has a better handle on small business data and small business advertising needs and that G+ can be a more useful all around tool.

Given its lack of current and immediate value and its lack of business profile pages (it only supports individual) any thing you do there will be strictly r & d or r & r depending on how you look at it.

I do think that G+ can be a single, unified communication platform for small businesses and that bears watching.