The Google Places promotion that started in Portland in December, 2010 is now ongoing in four additional cities: Austin, Las Vegas, Madison and Charlotte.

As a part of the promotion, any business in any of those cities that claims their listing is eligible for a business kit that includes Google bling. Apparently several businesses are having difficulties with the ordering process and reported problems in the forums.

I was curious about the process and problems and managed to finagle an order via the online catalog. Here is a slide show of oder process and the (many) items available. Many of the same items available in Portland are also available in the four other cities although it is not clear if Google is using every promotional tactic that they used in there.

Unfortunately Google was out of stock on the neon signs and the fridge magnets but they apparently still have a good stock of the fortune cookies. Not sure exactly what they might be predicting….: 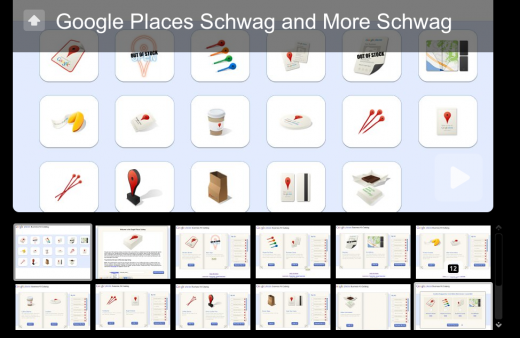 This is certainly more than just a schwag promotion, looks like a brand-building effort to me. Google is trying to transform the places pin into an iconic brand representation. They want places to be its own brand.

Oh, absolutely… they have been executing a branding exercise for Places since 2009 and this is the local extension of that. It is incredible the amount of “stuff” that they are making available…

Just ordered some schwag for all of our Las Vegas clients! Now, when will my clients actually receive it?!

Let me know the time to delivery. I would be interested.

Nice idea, I like several of these items and think they’d be of value to help promote reviews on Places… not so confident about the toothpicks though 😉

@Andy
They need to send along something like beef jerky so there would be a compelling use case for the tooth picks….