Update: At roughly 10:00 am EST it appears to have been fixed.

Last night I went to bed with my blog post about the new Places hotel booking feature in the bag thinking life was under control and all was good in Google Places land. Hah!

I awake to an email from Matt Tengler of allLocal alerting me to a bug the size of the cockroach that ate Tokyo.

Every Places Page business name has been replaced with their address. The bug is not showing on the main serps or in Places search, only on the Places page: 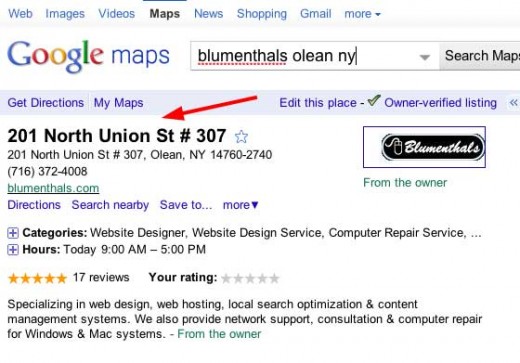 Not in the UK it hasn’t…but might well come in at a later date as US usually leads.

Ouch! That stings a bit, but like you pointed out it’s not showing in the SERPS or Places results, so it should cause only moderate havoc, since in theory one has already arrived at a Place page of their choosing.
My concern is how does this affect Places Mobile app on iPhone?

Thanks for the international perspective.

Yes the visual damage is not widespread although it will create a fair bit of what I call the “it must be my fault” syndrome.

A correspondant noted this in an email to me: [I first noticed it] Around 7:45AM EST this morning — then spent 15 minutes freaking out thinking we had screwed up our client’s listings 🙂

It will be interesting to see how long it takes Google to fix this one. Hopefully it is a simple fix.

Got the same issue here in the Netherlands.
I manage two businesses with one google account (all Dutch, sorry) I own both businesses, both are at the same physical address.
Jelle Beijer (http://goo.gl/maps/TmZ4) is active and working
Get-Located is suspended for review (thus no url available)

Get-located data is shown on the Jelle Beijer places entry; the adress is shown as the location title.

I am actually encouraged by this bug. It means Google is changing something do with the business names, and obviously whatever changed went awry. Could it be about merged listings of similar business names?

@Jelle
Thanks for the Dutch POV

@Lauren
Wow, you are a true optimist. Your cup is not just half full, its over flowing. Here’s hoping!

for me, your listing is showing in Chrome with Blumenthals.com as the business name.

Yeah, back to normal for me now too.

Yup the names are back (party).
Hope that Lauren is right, though 🙂

@Mike…thanks…not up here in g.ca yet…but I’d guess it’s a coming too….tho hopefully, it’s just an ‘itch’ that G will ‘scratch’ and company names will reappear….

@All
Thanks for the many reports. It does appear that Google quickly quashed this one.

Mike: It appears to me that problem was fixed.

Now I’d like to speak on semantics and reference what Tyler referenced and your response. Essentially:

A) the problem was only showing in Places
B) that does mitigate the issue. It wouldn’t be the size of the cockroach that ate Tokyo
C) It does cause deep consternation and issues for those that manage websites–ie “What did I do wrong” How do I fix that!!! etc.

Of note: The other day you referenced this post about “potential Google Customer Service” https://blumenthals.com/blog/2011/02/16/google-placetags-support-calls-me-back/#comments

Two of the comments, including Ryan and I referenced that we did get calls (albeit totally surprising calls) from Google with regard to Duplicate listing records.

In my case the duplicate disappeared from the main listings, the merged organic/Local listings…and most places. Moreover in my case, it appears the potential and actual scraping of “signals” citations, reviews, etc. that were jumping from record to record….has stopped. At least its stopped for the time being.

Having referenced all that…..the Duplicate Record still exists in the Google Places Index. Why they can’t get rid of it once and for all….I don’t understand. To the extent its there (even though there is no business there) is a potential problem…but not a big problem.

Lets face it. Direct traffic to the Places Page is probably minuscule…Possibly below minuscule.

Certainly as shown by the email you received–it creates problems for the webmaster….but if the accurate record is showing in the main Google Serps….life is pretty good….especially if you are #1.

Cockroach that ate Tokyo??? maybe not. but a cockroach nonetheless 😀

We noticed that our business listing was missing but the reviews were showing up in the SERPS.. strange, finally concluded our business listing has been merged with another agency. This has created somewhat of a mess where overlapping details on two organizations now reside under one business profile.

What was surprising and got me thinking of Mikes earlier post on “potential Google Customer Service” is we actually had a call answered in two rings and it was answered by a live Google agent!

BTW, has anyone else noticed something going on with the Bing Local Business center? I first noticed this when I went to getlisted.org to double check that I did not screw something up and noticed we were not only “not found” in Google but also now Bing. So I logged into my account and confirmed the listing was still intact and stamped with a date it was verified. Decided to goto mapquest and check out the results just to find we are indeed not showing up.

You are slipping in your role as defender of cultural values. You note my hyperbole about the cockroach but not even a squeak about the great road sign!

I’m with lauren on this +++ 🙂 could it mean something is in the works to deal with spammy names?
Andy 🙂